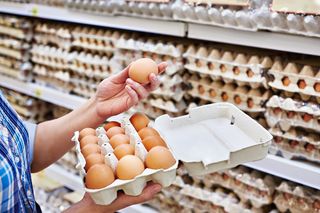 More than 200 million eggs are being recalled because they could be contaminated with Salmonella, but how do the bacteria get into eggs in the first place?

On Friday (April 13), egg producer Rose Acre Farms announced that it was recalling about 207 million eggs that came from its North Carolina farm. The eggs were distributed to nine states, and were sold under multiple brand names, according to the Food and Drug Administration (FDA). So far, the outbreak has sickened 22 people.

With eggs, Salmonella contamination often happens inside the chicken itself, said Benjamin Chapman, an associate professor and food safety specialist at North Carolina State University. That's because Salmonella bacteria can colonize the ovaries of the chicken and get inserted into the egg during egg formation, he said. That means that even eggs that appear normal could have Salmonella lurking inside.

Contamination could also occur after the eggs are laid. This happens because chickens can carry Salmonella in their intestines and shed the bacteria in their poop, which could get on the outside of the eggs during nesting, Chapman said. As such, to reduce the risk that Salmonella will be present on the outside of the egg, the U.S. Department of Agriculture requires that eggs be washed before they are sold. [Top 7 Germs in Food That Make You Sick]

Even with safety steps in place, it's estimated that about 1 in 20,000 to 1 in 10,000 eggs are contaminated with Salmonella, Chapman said. That's why health officials recommend cooking eggs until both the yolks and whites are firm, according to the Centers for Disease Control and Prevention (CDC). For egg dishes, such as casseroles, the food should be cooked until it reaches an internal temperature of 160 degrees Fahrenheit (71 degrees Celsius).

"Having that [contaminated] product means I have to make no mistakes" when preparing the food, he told Live Science. In addition to undercooking, there's a risk that consumers could cross-contaminate parts of their kitchen with Salmonella if they aren't careful. "I would rather just not have that product … knowing it’s a risk of contamination," Chapman said.

People who bought the recalled eggs should immediately stop using them and return them to the place they bought the eggs to get a full refund, according to Rose Acre Farms.

Symptoms of Salmonella infection include diarrhea, fever and abdominal cramps that occur between 12 and 72 hours after infection, according to the CDC. Symptoms of the infection usually last four to seven days, and most people recover without treatment. But in some cases, the diarrhea can be so severe that a person needs to be hospitalized. Severe Salmonella infections are most likely to occur in young children, older adults and people with weakened immune systems.

You can find more information about which eggs have been recalled here.