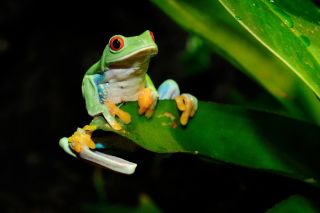 Red-eyed tree frogs, Agalychnis callidryas, are colorful amphibians found in the tropical lowlands of Central America where the animals hunt after dark for their insect prey. The frogs are arboreal and are commonly be found on plants and trees.
(Image: © Julie Larsen Maher ©WCS)

Frogs are amphibians that are known for their jumping abilities, croaking sounds, bulging eyes and slimy skin. They live all over the world and are among the most diverse animals in the world, with more than 6,000 species.

Frogs substantially outnumber the two other groups of amphibians — salamanders and caecilians. According to the American Museum of Natural History (AMNH) online reference site, Amphibian Species of the World, which is updated in real time, as of late April 2015, there are 6,482 species in the Anura order (frogs and toads), 691 species in the Caudata order (salamanders and newts) and 204 species in the Gymnophiona order (caecilians). Caecilians look like large worms or slick snakes, according to the San Diego Zoo. They have no arms or legs, and live underground in a network of tunnels.

There is no scientific distinction between frogs and toads, according to the University of Michigan Museum of Zoology. Frog and toads both belong to the Anura order, but are found in different families. "True toads" make up the Bufonidae family, which includes 580 species.

Frogs and toads do have specific traits that define them, however, according to the Maryland Zoo. For example, frogs are mostly aquatic; most toads live on land (but near water). Frogs have teeth; toads do not. Toads of both sexes have a rudimentary ovary called a bidder's organ. Frogs are also typically longer than toads.

Also, frogs have smooth, slimy skin; toads have dry, bumpy skin. The bumps, however, are not warts, and a person cannot get warts from handling a toad, according to the San Diego Zoo. However, toads have glands behind their eyes that can secrete a burning milky toxin.

Some frogs have toxic skin. Some South American frogs are so toxic that one drop of their skin secretions can kill an adult human. Poison frogs usually have bright colors to warn predators that their skin is toxic, according to the San Diego Zoo. Camouflage is another survival technique. Many frogs have mottled green or brown skin to help them blend in with their surroundings. [Gallery: Freaky Frog Photos: A Kaleidoscope of Colors]

Since there are so many types of frogs, one size doesn't fit all. The largest frog is the Goliath frog, which is 13.5 inches long (30 centimeters) and weighs 6.6 lbs. (3 kilograms), according to the San Diego Zoo. The devil frog of Madagascar, now extinct, once held the title of largest frog. It was 16 inches long (41 cm) long and weighed 10 lbs. (4.5 kg), according to National Geographic.

Frogs need to be around areas with a water source to reproduce, but other than that, they are found on every continent except Antarctica and in almost every environment. The poison dart frog lives in the tropical forests of Central and South America. Northern leopard frogs live in the northern areas of North America in marshes and grasslands. The green-eyed tree frog lives in the moss-covered rain forests of Queensland, Australia, according to National Geographic. The desert rain frog lives exclusively in Namibia and South Africa, along the coast in sand dunes.

Frogs will often eat any living thing that will fit into their mouths. This includes bugs, spiders, worms, slugs, larvae and even small fish. To catch prey, their sticky tongues will dart from their mouths and pull the prey into the frog's mouth. This movement is so fast often the prey doesn't have a chance to escape. A frog's tongue can snap back into its mouth within 15/100ths of a second.

Frogs and toads help keep the world's insect population under control, according to the San Diego Zoo. Their appetite for bugs is usually quite helpful, but sometimes it can lead to disaster. For example, in 1935, cane toads from Puerto Rico were introduced to Australia to kill sugarcane beetles. However, the cane toads, which can grow as large as a dinner plate, preferred to eat native frogs, small marsupials and snakes. The original 102 toads set out across the continent and have mushroomed in number to more than 1.5 billion, according to a 2010 Live Science article. Today, cane toads have conquered more than 386,000 square miles (1 million square kilometers) of Australia. This is equivalent to an area slightly larger than the states of Texas and Oklahoma combined.

Frogs are social creatures that live in groups. A group of frogs is called army, colony or a knot. Groups of young frogs will even swim together in schools, much like fish.

During mating season, the male frogs in a group will croak quite loudly. Frogs croak to attract females. When the female finds a male croak she likes, the male will grab her and she will release eggs for him to fertilize.

Frogs become mature between two months to 3 years old. Colder temperatures can determine how fast a frog matures, as well as the species of frog. After a female frog becomes mature, she can lay from two to more than 50,000 eggs at once, depending of species. Eggs will incubate for 48 hours to 23 days, submerged in water, according to the San Diego Zoo. During incubation, the male frog typically protects the eggs.

Once an egg hatches, a small, legless, fish-like creature emerges. This frog offspring is called a tadpole. The change from a tadpole to a frog is started by hormones from the tadpole's thyroid gland according to the National Center for Biotechnology Information. Over time, the tadpole will grow legs, lose its tail and will emerge from the water onto land. How fast the tadpole transforms depends on environmental factors.

The taxonomy of frogs, according to the AMNH, is:

While some frogs are safe and prolific, others are endangered, according to the International Union for Conservation of Nature (IUCN). The group's Red List of Threatened Species lists the lemur leaf frog, black-eyed leaf frog and Vanzolini's spiny-chest frog as critically endangered.

The word "amphibian" comes from a Greek word that means "both lives." This is because frogs start their lives in the water and then live on land, according to Defenders of Wildlife.

All frogs are known for their fantastic jumping skills, but the African frog is the best. It can jump 14 feet (4.2 meters) in a single bound, according to the San Diego Zoo. Not all frogs hop, though. The waxy tree frog walks like a lizard.