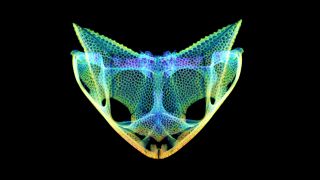 Hemiphractus scutatus, a South American horned tree frog, has a wide skull with a large gape that enables it to prey on vertebrates.
(Image: © Florida Museum/Image by Edward Stanley)

Frogs' heads may look smooth and rounded on their surfaces, but peek under the skin of some species and you'll find skulls that resemble the heads of mythical dragons, studded with spikes, spines and other bony structures.

Scientists recently highlighted the diversity of frog skulls in a series of incredible images, part of a new study investigating skull evolution and function in armored frogs.

In these frogs, skulls can be shield-shaped or exceptionally wide; they may be pocked by grooves or adorned with pointy bits that may provide extra protection against being eaten, the researchers reported.

Artificial color in the images indicates variations in bone density in different skull parts, said lead study author Daniel Paluh, a doctoral candidate in the Department of Biology at the University of Florida. In the image of the horned frog Hemiphractus scutatus, "blue parts of the skull, such as the braincase, are lower density than the green regions, including the jaws," Paluh told Live Science in an email.

There are approximately 7,000 known frog species. For the study, the scientists collected data from 158 species representing all of the major frog families. They found that not only was there a lot of variety in skull shapes; some of those variations appeared across different lineages, separated by millions of years of evolution.

"For example, large, fortified skulls with intricate patterns of pits and grooves have independently evolved in the African bullfrog, South American horned frog and the Solomon Island leaf frog," Paluh said. "And all of these species are ambush predators that will eat other vertebrates."

Shovel-headed tree frogs, whose flattened skulls resemble gardening tools, use their heads to block entry to the cracks and holes where they live. Their skulls also have spines, ridges and grooves, "in addition to very wide skull roof bones that provide protection from predators," Paluh explained.

"Because all frogs look so similar, there has been limited interest in studying the evolution of their anatomy," Paluh said. "Our study demonstrates there is still much to learn about the evolution, ecology and anatomy of these amazing animals."

The findings were published online today (March 27) in the journal Proceedings of the National Academy of Sciences.