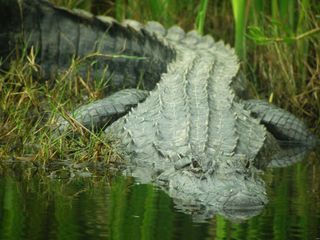 Alligators are large reptiles, members of the order Crocodylia. Alligators and crocodiles are, therefore, closely related, and people often confuse one with the other; however, these two reptiles are very different.

An alligator is distinguished by its wide, rounded snout and black color. Also, all of its upper teeth can still be seen when its mouth is closed. Crocodiles, on the other hand, have narrow, pointed snouts, a grey-green color and only the fourth tooth on the lower jaw can be seen when the animal's mouth is closed, according to Florida Fish and Wildlife Conservation Commission (FWC).

There are two different types of alligator, and they vary in size. The American alligator can grow up to 11.2 feet (3.4 meters) long and weight nearly half a ton (1,000 lbs. or 454 kilograms), according to the Smithsonian National Zoological Park. Chinese alligators are smaller, growing to around 4.6 to 4.9 feet (1.4 to 1.5 m) long and usually weighing only around 50 lbs. (22.7 kg).

The American alligator lives in the southern United States, from North Carolina to Texas, according to the Smithsonian Zoo. These gators can be found in slow-moving rivers, ponds, lakes and swamps.

Chinese alligators live in eastern China, and they are confined to a small area in the Yangtze River basin near the Pacific Ocean, according to the Saint Louis Zoo. They are traditionally found in rivers, lakes, ponds and swamps, but are now confined mostly to ditches and ponds on agricultural land. Much of their habitat has been converted to rice paddies.

Alligators are social creatures and often stay in groups called congregations. These groups are typically seen basking in the sun or taking a swim. This is because alligators can't control their temperature internally. So, when they are cold, they sunbathe, and when they are hot, they go for a swim.

Alligators also use water to hunt. On land they are awkward, but in the water they can swim very quickly using their tails. This makes it easier for them to catch prey. American alligators can swim up to 20 mph (32.18 km/h) and run on land as fast as 11 mph (17.7 km/h), according to the San Diego Zoo.

Alligators aren't picky about what they eat. They are carnivores, so any type of prey is a meal to these reptiles. Alligators may eat fish, mollusks, birds, small mammals and other reptiles. Though carnivores usually only eat meat, alligators will also munch on fruit.

Alligators mate in June. Males may fertilize several females in one mating season, , according to the University of Michigan Museum of Zoology. Females are known to have only one mate each season. In July, the female alligator creates a nest from mud, plants and sticks in which she lays her eggs. The Chinese alligator can lay 10 to 50 eggs at a time, according to the Detroit Zoo. The American alligator lays a similar number. After the hard-shelled eggs are laid, the mother alligator will cover them with more mud, sticks and plants.

As the eggs incubate in the nest, the female will watch over them. In September, when the babies are ready to hatch, she will help them by removing debris covering the nest and. She may also help the babies by breaking the shells with her mouth.

As soon as they are born, the babies, called hatchlings, can go and catch their own food. Chinese hatchlings weigh only around 1.05 ounces (30 grams) and are around 8.3 inches (21 centimeters) long, according to the University of Michigan Museum of Zoology. American hatchlings are around 6 to 8 inches (15 to 20 cm) long. After around two years, they leave their mother's protection to start their own families.

The taxonomy of alligators, according to the Integrated Taxonomic Information System (ITIS), is:

The Chinese alligator is "critically endangered," according to the International Union for Conservation of Nature's Red List of Threatened Species. This category lists species at the highest risk for extinction. There are fewer than 130 Chinese alligators in the wild, according to the Saint Louis Zoo. Breeding programs in wildlife refuges and zoos have been successful, however.

The American alligator population is doing well, and is listed as a lower risk and "least concern."

The word "alligator" comes from the Spanish word "el lagarto," which means "the lizard."

Though many people are afraid of alligators, these animals keep to themselves and usually don't attack humans unless they are threatened.

The alligator's rough skin makes it look like a floating log, which is helpful when stalking prey.