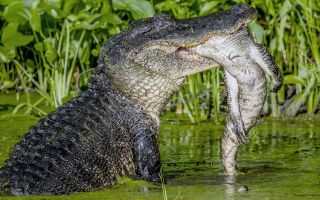 Cannibalism in alligators is more common than you might expect.
(Image: © Brad Streets/Caters News)

In a marsh near coastal Texas, a young alligator recently met a grisly end — as a meal for another, much bigger alligator.

A photographer happened to be nearby and captured the alligator cannibalism, as the hungry beast gulped down its prey. The small alligator was more than a mouthful for the larger predator, but the big gator determinedly gnashed and chomped, and the smaller gator's body and legs eventually disappeared down the big reptile's throat.

In the final photo, only the tail of the little alligator is still visible, dangling from the now-sated bigger gator's jaws. [Crocs: Ancient Predators in a Modern World (Photos)]

Photographer Brad Streets spotted the cannibalism at Brazos Bend State Park in Needville, Texas; his attention was first captured by a floating pile of guts that he spied in the water near a large alligator, he said in a statement.

About an hour later, he got a closer look at the gator and noticed that it had a much smaller alligator in its mouth, Streets said.

American alligators (Alligator mississippiensis) are abundant in Texas along the Gulf of Mexico, where they inhabit coastal marshes and river systems, according to Texas Parks and Wildlife (TPW). An estimated 250 alligators measuring at least 6 feet (1.8 meters) long inhabit Brazos Bend State Park, and some measure as long as 16 feet (4.9 m), TPW representatives said on the park's website.

Alligators living in the park may be found anywhere there is water, and "even in some places where there isn't water," according to TPW. Gators aren't picky eaters and will swallow whatever they find in or near the water that they think might be food — and that can include rocks, shotgun shells and beer cans, the TPW explained.

Some American alligators have been known to snack on sharks, scientists reported in a study published in September 2017 in the journal Southeastern Naturalist; researchers have even observed crocodilians eating fruit. But an alligator's typical diet includes fish, turtles, snakes, birds and mammals — such as rabbits, hogs, raccoons and deer — and yes, sometimes other alligators.

In fact, alligator cannibalism is not at all unusual, James Nifong, a research biologist in the Wetlands and Coastal Ecology Branch of the U.S. Army Corps Engineer Research and Development Center, told Live Science.

"The larger males, they're opportunistic. They see a smaller alligator — it's a nice snack for them," Nifong said. "It usually happens with larger adult males that have established a certain territory. During mating season, when subordinate males come along, they fight — and the winner eats the loser."

"They'll do a 'death roll' and spin in the water and use their sharp teeth and strong jaws to rip off chunks of the prey and swallow it in pieces," Warner said.

For a really big meal, an alligator might stash its bloody prize in a den or burrow at the water's edge to let it "soften up" so that it's easier to tear apart, and then come back and finish it off later, Warner added.

"It depends on the size of the prey, the temperature of the water and how hungry they are," he said.

A meal the size of a young alligator, such as the one shown in the photos, would take the big gator a couple of weeks to digest, Nifong told Live Science. But that doesn't mean that the alligator will take a break from enjoying the ongoing buffet its watery ecosystem provides, he added.

"They're not like snakes, which sit there for a month after a big meal and don't eat anything. If they have access to food — they'll take it," Nifong said.