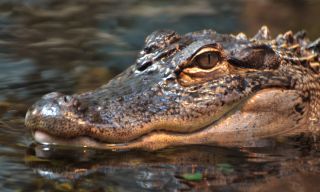 A teenage girl rafting in a creek got the fright of her life when an alligator nearly as long as two grand-size pianos chased her up a tree in Florida's Ocala National Forest on Friday (June 29).

When the 9-foot-long (2.7 meters) alligator approached 15-year-old Jordan Broderick in the midafternoon, she grabbed onto a large, overhanging branch and climbed into a tree, according to the Orlando Sentinel. But that didn't dissuade the gator. It stayed at the base of the tree, aggressively hissing at her, for at least 30 minutes.

Alligators usually steer clear of humans, but that's not always the case. Unless you're near a tall, climbable tree like Jordan was, you may not know what to do. Here are the best ways to avoid and escape aggressive alligators. [Crocs: Ancient Predators in a Modern World (Photos)]

In Jordan's case, her family called 911, and about half an hour later Deputy Mitch Blackmon arrived at the scene. "My presence failed to scare the alligator away," Blackmon wrote in the police report. "It began encroaching on my area, at which time I fired one single 223 round from my Bushmaster AR15, killing the alligator."

Jordan's case is rare but not unheard of, said James Perran Ross, a retired associate scientist of wildlife ecology and conservation at the University of Florida. "Periodically, you get one behaving like this," Ross told Live Science. "It may have been thinking about trying to catch her."

If you see an alligator in the wild, it's best to give it space, Ross said. For starters, don't go into the water if there is an alligator there.

"The real problem, of course, comes from the alligator that you don't see," Ross said. "The danger zone for an alligator is about half its body length, directly in front and about 80 or 90 degrees from either side. That's the distance that it can very rapidly strike."

If you're that close to an alligator, back off and run away, Ross said. He noted that the idea of "running in zigzags" is a myth. Just run in a straight line, directly away from the alligator, Ross said.

Alligators can move up to 35 mph (56 km/h) for short distances on land, according to the Texas Parks and Wildlife Department (TPWD). (By comparison, gold medalist Usain Bolt tops out at about 28 mph (45 km/h.) "Never make the mistake of thinking that an alligator is slow and lethargic," TPWD reported. "Alligators are extremely quick and agile and will defend themselves when cornered."

If an alligator bites you, "you should fight like hell," Ross said. Alligators and other types of crocodilians often release prey if they find it is too strong and dangerous for them to pursue, he said.

"Struggle, fight, push, gouge, scream — anything you can do to get away," Ross said. In particular, hit their snout and eyes; the snout is covered with sensitive receptors, and the eyes are one of the only parts of their body that's vulnerable, Ross said.

But this doesn't always work. In 2016, an alligator snatched and killed a 2-year-old boy at a Disney resort in Florida, even after the boy's father attacked it, Live Science previously reported.

If you do survive an alligator attack, it's important to seek medical treatment immediately, because alligator bites often impart "very nasty infections," likely because of harmful bacteria in their mouths and the water, Ross said. [Alligators vs. Crocodiles: Photos Reveal Who's Who]

The alligator that went after Jordan slipped into the water after Blackmon shot it, and it was found dead later Friday night. An analysis showed that the alligator was a female and that her nest was nearby, Ron Magill, the Miami-Dade Zoological Park and Gardens spokesperson, told the Washington Post.

Alligators in Florida typically mate in late May and early June, and males are known to patrol their territory and respond to perceived threats more actively than they otherwise would during this time, Ross said. Once female alligators lay their eggs, some (but not all) will guard these nests from humans.

Alligators are also more active at dusk, although they can be active at any time of the day or night, Ross added.

The best lesson is to be cautious around waters where alligators live, Ross said. "People just need to be alert and aware," he said.