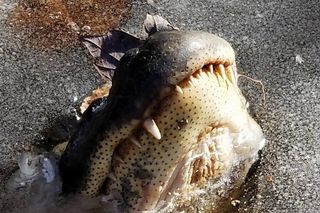 An alligator sticks its snout out through the ice at Shallotte River Swamp Park, in North Carolina.
(Image: © The Swamp Park in Ocean Isle, N.C.)

A video showing alligator snouts poking out though an ice-covered swamp in North Carolina during last week's cold snap may look like the preview of an avant-garde art installation, but it actually depicts an adaptive trick that helps these reptiles survive in winter weather, a wildlife ecologist said.

Unlike mammals, alligators rely on ambient temperature to keep their bodies warm, which is why they can often be found basking in the sun or hanging out in air-pocketed burrows they've dug into the banks of rivers and lakes.

But when it gets so cold that their ponds freeze over, some alligators are known to swim to the surface and poke their snouts above the icy water so they can breathe properly, James Perran Ross, a retired associate scientist of wildlife ecology and conservation at the University of Florida, told Live Science. [Alligator Alley: Pictures of Monster Reptiles]

"It's an interesting behavior because it's opposite of what most crocodilians do," Ross said. "The normal response of most other crocs when it gets really cold is to come out of the water and try to bask to get warm again."

But getting out of the water on a cold day isn't a good idea; the air is usually colder than the water itself, meaning that these ectothermic (or cold-blooded) creatures typically freeze to death, Ross sad.

Luckily, because they live in tropical habitats, crocodilians generally don't face freezing temperatures. But the American alligator (Alligator mississippiensis), a member of the order Crocodilia, sometimes finds itself in chilly conditions, especially the individuals that live as far north as North Carolina on the East Coast and others that live in the southern half of Arkansas, above Louisiana, Ross said.

In the video, posted to Facebook on Jan. 5, several alligator snouts can be seen poking up through the ice at Shallotte River Swamp Park, in Ocean Isle Beach, a seaside town in southern North Carolina.

"[They're] giving themselves the ability to be able to breathe, even though it's all iced up," the videographer says. "Here, we are in our freezing last few days, and the alligators are doing their thing."

However, this snout-above-water trick doesn't always work. In 1977, a male American alligator stuck its nose through a 4-inch-diameter (10 centimeters) hole after the reservoir where it was living in South Carolina froze over, according to a 1982 study in the journal The American Midland Naturalist.

The alligator periodically lifted its nose out of the water to breathe, the researchers observed. But they discovered its dead body a few days later, floating below the recently iced-over hole. Because no one saw the alligator die, it wasn't clear whether the alligator died before or after ice covered its breathing hole, the study authors wrote.

The takeaway? Cold water causes alligator body functions to slow down. So, whether or not they have a breathing hole, alligators have trouble surviving in water that's below about 39 degrees Fahrenheit (4 degrees Celsius), the researchers wrote.