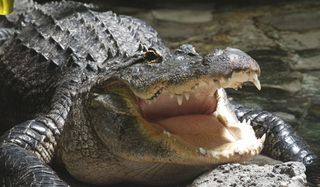 American alligators are beautiful, amazing, horrible monsters. As such, there are many parts of their body that they can obviously hurt you with. Up front, they've got wide, grinning toothy mouths that can clamp down on your limbs with deadly force. In the back, they've got powerful tails for thwacking. Even alligator claws are wicked, though they don't usually use them to fight.

But, as one trapper in Ocoee, Florida experienced firsthand yesterday (June 6), even an alligator with nearly all those parts pinned down has a weapon of last resort: the incredible thwack of its hard skull. [Alligators vs. Crocodiles: Photos Reveal Who's Who ]

A local NBC affiliate shared a video on Twitter that begins with an alligator trussed up on a sidewalk in a residential neighborhood, surrounded by a trapper and several police officers. Its jaws are taped shut, its eyes blindfolded, its four limbs are tied behind its back, and its tail lolls harmlessly behind its body. The trapper bops the alligator on the head several times. (Exactly what his goal is is unclear, though alligator trappers do often rub the creatures' bodies to calm them down.)

Eventually, the trapper and the officers grip the alligator and lift it toward the back of a pickup truck. Just as its tail contacts the truckbed, the alligator snaps its head back, apparently head-butting the trapper. The incredible force of the blow sends his sunglasses shooting off of his head, and he falls over, reportedly unconscious. One of the police officers topples as well, struck by the writhing tail. The alligator slithers off the back of the truck, and plops back onto the ground.

John Hutchinson, an expert in animal motion at the University of London, said that no one's ever studied just how much speed and power an alligator can deliver with a head butt, but that it doesn't surprise him to learn it's enough to knock a man out.

"Gators have large neck muscles for handling prey, and those muscles have fast-twitch fibers so they can contract quickly," Hutchinson told Live Science.

He added that he wouldn't be comfortable judging the trapper for the alligator's treatment or for the end result.

"It’s a tough situation because the gator was in a populated area and needed to be removed, hopefully to somewhere safer. Someone could have been more seriously hurt. The gator was blindfolded which calms them, and the trussing shown would be uncomfortable but not causing permanent injury," Hutchinson said.

"The trapper and police were putting themselves in harm’s way, and they didn't kill the gator outright, so one might say that they were making the best of a bad situation," he said.