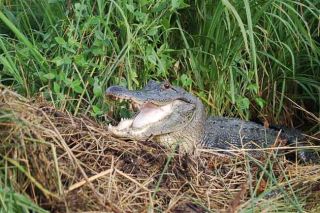 Crocodiles are ferocious creatures that will eat snakes, buffalo, cattle and even people. New research explains crocodiles' spectacular method of digesting large meals that lets them eat 23 percent of their body weight at once, bones and all.

If people could gorge like crocodiles, a 130-pound woman could down a 30-pound hamburger in one sitting.

The secret behind this champion eating is a heart valve that crocs control neurologically, which lets blood bypass the lungs and flow through a special aorta straight to the stomach, enabling them to secrete gastric acid at rates 10 times faster than those measured in any other animal.

Crocodiles, alligators and other crocodilians all share this ability, said biologist C. G. Farmer at the University of Utah, who discovered the connection between the heart valve and digestion in research that will be detailed in the March-April issue of the journal Physiological and Biochemical Zoology.

"It's been known for many years that reptiles can shunt blood past the lungs, but the function has not been understood," Farmer told LiveScience. Many possible explanations for the purpose of the heart valve have been proposed, including the suggestion that the process is important for diving underwater for long periods of time, although no data has yet been found to support this hypothesis.

"Some people in the field are pretty sure this is explained by diving, so I think they're going to be surprised," Farmer said.

Farmer and her colleagues surgically altered some crocodiles so that they could not use the valve to send blood past the lungs. The biologists then measured how quickly the crocs could secrete stomach acid and found that those with the valve intact produced acid at a much higher rate.

When blood bypasses the lungs, it holds on to the carbon dioxide that would have normally been released into the gases in the lungs. Carbon dioxide is a chemical ingredient of gastric acid, so the more CO2 in the blood when it reaches the stomach, the more acid can be produced. This is essential for digesting large amounts of food.

"If any animal eats a meal that size, they can't process it immediately," Farmer said. "As the meal is being broken down, the stomach holds on to the bulk of the food and sends little bits on to the intestine. If they weren’t able to secrete a lot of acid in their stomachs, the food there would putrefy due to the overgrowth of bacteria. Eating big meals infrequently has selected for this ability."

The excess of stomach acid is also helpful in dissolving the bones of prey crocodiles swallow whole.

While the neurologically-controlled valve is found only in crocodilians, all reptiles have some kind of shunting system for moving blood past the lungs.

Farmer said it would be interesting to see if Burmese pythons also use the system for digestion, because they can eat meals that weigh more than 100 percent of their body mass.

"They do have a shunt system, and I'll bet you they're using it," she said. "It's just hard to study for technical reasons. But I bet you money this is going to apply to all reptiles."