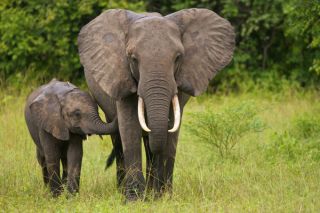 Elephants are the largest land animals on Earth, and they're one of the most unique-looking animals, too. With their characteristic long noses, or trunks; large, floppy ears; and wide, thick legs, there is no other animal with a similar physique.

Most experts recognize two species of elephant: the Asian elephant (Elephas maximus) and the African elephant (Loxodonta africana), who live on separate continents and have many unique features. There are several subspecies that belong to one or the other of these two main species, though experts argue over how many subspecies there are and whether or not they constitute separate species, according to the San Diego Zoo.

The ears of African elephant are larger and resemble the shape of the African continent, while Asian elephants have smaller, rounder ears, according to the San Diego Zoo.

Tusks are large, deeply rooted teeth that evolved to assist the elephant in digging, lifting, gathering food, and defense while also protecting the trunk, according to World Wildlife Fund. In the same way that humans tend to be right-handed or left-handed, elephants can be right-tusked or left-tusked. Their dominant tusk is easy to identify, because it will be more worn down than the less dominant tusk, according to the World Wildlife Fund.

Both species eat all types of vegetation, including a variety of grasses, fruits, leaves, bark and roots. They spend about about 16 hours eating, consuming anywhere from 165 to 330 lbs. (75 to 150 kg) of food per day, according to the San Diego Zoo.

Groups of elephants, or herds, follow a matriarchal structure with the eldest female in charge. Herds are composed of primarily female family members and young calves, according to the San Diego Zoo, and include 6 to 20 members depending on the food supply. When the family gets too large, herds often split into smaller groups that stay within the same area.

The matriarch relies on her experience and memory to recall where the best spots for food, water are, and where to find protection from the elements. The matriarch is also responsible for teaching the younger members of her family how to socialize with other elephants.

Elephants are very social and can communicate with one another and identify other elephants from distances of up to 2 miles using rumbling, low-pitched sounds that fall below the audible range of humans, according to the National Zoo.

Elephants readily show good manners to members within its herd and other herds, according to the San Diego Zoo. For example, they use their trunks to greet one another, either by holding it out high or by inserting the end of their trunk into another elephant's mouth.

Elephants also pay close attention to the well-being of all the members of their herd, and will do what they can to take care of and protect weak or injured members.

They're considered an extremely intelligent species, and have been observed showing advanced problem-solving skills and demonstrating empathy, mourning and self-awareness, according to an article in Scientific American.

Male and female elephants become sexually mature between 8 and 13 years of age. Male elephants will leave their herd around this time, as long as they're able to find their own food and protect themselves, according to the Smithsonian National Zoo. Adult males either live on their own or in small bachelor herds.

Usually, only a single calf is born following a 22-month pregnancy. A newborn calf weighs between 150 and 350 lbs. (68 and 158 kg) stands about 3 feet tall. Calves also tend to be hairy with long tails and very short trunks.

Elephant calves grow quickly, gaining 2 to 3 lbs. every day in their first year, according to the San Diego Zoo. By the time they are 2 or 3 years old, calves are ready to be weaned.

The International Union for Conservation of Nature and Natural Resources (IUCN) classifies the Asian elephant as endangered. Though it is not known exactly how many Asian elephants remain, experts believe that the population is decreasing.

Threats against the survival of both African and Asian elephants include poaching and habitat loss, according to World Wildlife Fund.

This article was updated on March 18, 2019, by Live Science Contributor Rachel Ross.