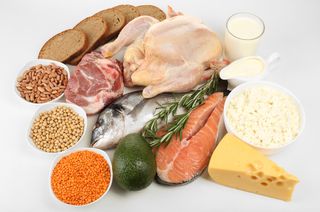 Protein is a macronutrient that is essential to building muscle mass. It is commonly found in animal products, though is also present in other sources, such as nuts and legumes.

There are three macronutrients: protein, fats and carbohydrates. Macronutrients provide calories, or energy. The body requires large amounts of macronutrients to sustain life, hence the term “macro,” according to the University of Illinois McKinley Health Center. Each gram of protein contains 4 calories. Protein makes up about 15 percent of a person’s body weight.

“When protein is broken down in the body it helps to fuel muscle mass, which helps metabolism," said Jessica Crandall, a registered dietitian nutritionist, certified diabetes educator and national spokesperson for the Academy of Nutrition and Dietetics. "It also helps the immune system stay strong. It helps you stay full. A lot of research has shown that protein has satiety effects.”

For example, two recent studies showed that satiety, or feeling full after a meal, improved after consuming a high-protein snack. A 2014 study published in the journal Nutrition compared afternoon snacks of high-protein yogurt, high-fat crackers and high-fat chocolate. Among the women who participated in the study, consuming the yogurt led to greater reductions in afternoon hunger versus the chocolate. These women also ate less at dinner compared to the women who snacked on crackers and chocolate.

A similar study published in 2015 in the Journal of Nutrition found that adolescents who consumed high-protein afternoon snacks showed improved appetite, satiety and diet quality. The teens also had improved moods and better cognition.

The Institute of Medicine recommends that 10 to 35 percent of daily calories come from protein. How that equates to grams of protein depends on the caloric needs of the individual. According to the U.S. Department of Agriculture, the amount of protein foods a person should eat depends on age, sex, and level of physical activity. Most Americans eat enough food from this group, but need to make leaner and more varied selections of these foods.

Most people need 20 to 30 grams of protein per meal, said Crandall. “For example, that’s 2.5 egg whites at breakfast or 3 to 4 ounces of meat at dinner.” She said that most American women are not getting anywhere close to adequate protein at breakfast. “That could be hindering their muscle mass, their metabolism and their hormone levels.”

Crandall cautioned parents against stressing protein consumption for their children, who typically get sufficient protein easily. “It’s important to focus on fruits and vegetables for kids, but protein supplementation for kids is going overboard,” she said. When considering how to get protein into kids’ diets, parents should focus on whole foods and natural sources.

All food made from meat, poultry, seafood, beans and peas, eggs, processed soy products, nuts and seeds are considered part of the protein group, according to the USDA. Most people eat enough food in this group, but they should select leaner and more varied selections.

Besides animal sources, there are several alternative sources of protein, including soy, hemp and whey. Crandall said that all are good options and it comes down to personal preference. For example, whey protein is better for building and regenerating muscle mass, so people looking to bulk up or who exercise a lot may prefer it.

Whey protein is a by-product of the cheese-making process and therefore not vegan. It is typically found in supplements, such as protein powders, according to Medical News Today. It is usually used to promote lean muscle mass and is also associated with weight loss, according to a 2008 study published in Nutrition & Metabolism. There are 20 grams of protein per scoop of whey protein.

Hemp protein comes from the hemp plant, which does not have THC (the active ingredient in marijuana), according to the North American Industrial Hemp Council. Hemp is available as seeds, a powder and milk. There are 5.3 grams of protein per tablespoon of hemp seeds, about 5 grams per scoop of hemp powder and 5 grams per cup.

Soy protein comes from soybeans and is available in many different forms, including milk, tofu, various meat substitutes, flour, oil, tempeh, miso nuts and edamame, according to the University of California San Francisco Medical Center. Crandall said that soy is a good source of protein.

“Soy has been shown to have a little more phytoestrogens in it from isoflavones, which really helps to increase antioxidants,” she said. “But a lot of people are hesitant to do soy because of a myth that associates it with breast cancer. But that myth has been minimized based off of a large body of evidence that supports the actual anticancer properties that soy has.” She pointed to a 2012 study published by the American Institute for Cancer Research.

To get the maximum benefits from soy, Crandall recommended eating whole sources, like edamame. Processed forms like tofu are the next best option, followed by protein powders and drinks.

According to Matthew Kadey, a registered dietitian writing for Bodybuilding.com, some high-protein meats include:

Some other high-protein foods are:

For a long time, nutritionists thought that complementary proteins had to be eaten together to make a complete protein. But it is now understood that the foods don’t have to be eaten at exactly the same time, said Crandall. As long as you eat a wide variety of foods, you can usually make complete proteins, even if you’re a vegetarian.

The Institute of Medicine recommends that 10 to 35 percent of daily calories come from protein. Most Americans do not get close to the 35 percent mark; they eat about 12 to 18 percent of their calories as protein, according to the NIH. Therefore, most commercial high-protein diet plans suggest intakes in the upper levels of the recommended spectrum. For example, the Atkins diet allows for up to 29 percent of calories to come from protein, and the South Beach Diet suggests protein levels at about 30 percent. Some high-protein diets, however, come in at higher than 35 percent.

Futhermore, high-protein diets can carry some health risks. They usually advocate cutting carbohydrates, which can lead to nutritional deficiencies, fiber deficiencies, headache, constipation, increased risk of heart disease and worse kidney function in those suffering from kidney disease, according to the Mayo Clinic.

Crandall does not recommend high-protein diets because they are generally unnecessary. “There’s a growing body of research that suggests that Americans are getting enough protein,” she said. The problem is that we don’t space out our protein correctly. “It’s more important that we focus on getting protein at each meal, eating it within the first hour of waking up and then every 4 to 6 hours thereafter.”

Crandall is also skeptical of protein-enhanced foods. “There are a lot of products now that have protein added. But is that getting you full? Is that getting you what you need? Make sure you’re thinking about meal planning a little bit … don’t let that become the go-to option for meals.”

The Ideal Protein diet is a low-carbohydrate, low-calorie, high-protein diet that aims to aid in weight loss by providing the body with the right amount and kind of protein while also stabilizing blood sugar. It consists of four phases. During the first three phases, participants eat at least one proportioned, prepackaged Ideal Protein meal per day. During phase one, in which most of the weight loss takes place, participants eat three Ideal Protein meals every day.

“Supplements are for supplemental purposes only,” said Crandall. Therefore, she does not recommend having protein shakes on a daily basis. Sometimes, however, people have serious behavioral barriers to eating whole foods. “If they feel like they can’t cook or eat whole foods … [protein shakes] can be a good plan B.”

If you are going to use protein shakes, Crandall recommends choosing one that has more than 20 grams of protein. “Most Americans want to shoot for lower-calorie, lower-carbohydrate drinks,” she said.

It is important to think about what you’re adding to protein shakes. If you’re using a protein powder to make a shake, Crandall suggests mixing it with water, nonfat milk or a milk substitute. “I strongly suggest not mixing fruit in — it can become very calorie-laden — like pie in a cup.” Adding vegetables, however, can add antioxidants and vitamins.