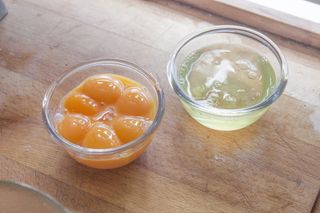 Egg whites are cholesterol-free and sugar-free and are excellent sources of protein and essential vitamins and minerals.
(Image: © Daniel Peter Ronneberg | Shutterstock)

For almost a century, there has been a debate about the cholesterol found in egg yolks and whether they are okay to eat. But that question becomes moot if you opt for cholesterol-free egg whites. Those who opt to go yolkless can still enjoy several significant nutritional benefits.

“Eggs are all-natural and provide one of the highest quality proteins of any food available. One egg provides more than six grams of protein, or 13 percent of the recommended Daily Value (DV),” said Dr. Mitch Kanter, executive director of the Egg Nutrition Center, the research arm of the American Egg Board. Egg whites contain more than half (four of the six grams) of an egg’s protein. The journal Proteome Science explained the biological function of the egg white, or albumen: “The avian egg white functions as a shock-absorber, keeps the yolk in place, constitutes an antimicrobial barrier, and provides water, protein and other nutrients to the developing embryo. Besides these biological roles it is an inexpensive source of high quality protein for food industries.”

Kanter noted that egg whites are good sources of riboflavin and selenium. Additionally, each egg white contains 54 milligrams of potassium, an essential mineral of which most Americans do not get enough, and 55 mg of sodium. Sodium gets a bad rap, but a moderate amount of it (about 1,500 mg per day, according to the Institute of Medicine) is essential for body functioning.

Egg whites are a low-calorie food, with just 17 calories — opposed to 71 per whole egg. They contain no saturated fat or cholesterol, making them a popular choice for those watching their cholesterol levels or suffering from diabetes or heart disease. Egg whites do not contain carbohydrates or sugar.

Here are the nutrition facts for egg whites, according to the U.S. Food and Drug Administration, which regulates food labeling through the Nutritional Labeling and Education Act:

At the turn of the 20th century, a Russian scientist named Nikolai Anichkov fed rabbits a diet of pure cholesterol, according to the journal Atherosclerosis. Their arteries clogged, and the concept that cholesterol causes heart disease was born. Later, in the 1950s, Ancel Keys published a well-known study that concluded that people from cultures that ate the most animal fat were most likely to develop heart disease (his analysis has since been called into question). These two studies proved highly influential and the presupposition that cholesterol and animal fat are bad for the heart became the basis for the American Heart Association’s recommendation that you should not consume more than 300 mg of cholesterol per day. Since a whole egg contains 47 percent of your daily cholesterol allowance, it’s no wonder they’re often considered bad for your heart.

According to Today’s Dietitian, some researchers who are skeptical of eggs point to a 1984 study in the Lancet, in which Harvard researchers had 17 lactovegetarian students add a jumbo egg to their diet for three weeks. This increased their daily cholesterol intake from 97 to 418 mg, and after three weeks their LDL ("bad") cholesterol levels had risen 12 percent. Their blood cholesterol levels had also increased. A more recent study, published in 2006 in The Journal of Nutrition, found that eating whole eggs increased LDL and blood cholesterol levels. In the study, a group of young Brazilian men were fed three egg whites per day while another group was fed three whole eggs per day. The rest of their diets were the same, and rather healthful, consisting mainly of fruits, vegetables, chicken, fish and beans. Those who ate whole eggs saw their LDL cholesterol rise more than 30 percent compared with those who ate the egg whites.

In recent years, however, whole eggs have made something of a comeback. According to the Harvard School of Public Health, “A solid body of research shows that for most people, cholesterol in food has a much smaller effect on blood levels of total cholesterol and harmful LDL cholesterol than does the mix of fats in the diet.” The importance of individual health came up again in an article published in Clinical Opinion in Clinical Nutrition and Metabolic Care, which looked at egg consumption in healthy populations and concluded that, while eggs do increase LDL cholesterol, there is no clearly established link between that and increased risk of heart disease.

A large-scale study of 37,851 middle-age to elderly men and 80,082 middle-age women published in JAMA found “no evidence of an overall significant association between egg consumption and risk of CHD [coronary heart disease] or stroke in either men or women.” The study, which followed participants for 14 years, concluded that eating one egg per day was likely fine for healthy adults. A study in the journal Circulation — widely known as the Physicians’ Health Study — looking at egg consumption and heart failure over a 20-year period, led to similar conclusions, and suggested that eating six eggs per week did not increase the risk of heart failure.

Furthermore, a meta-analysis published in The American Journal of Clinical Nutrition found no evidence suggesting that saturated fat is associated with an increased risk of heart disease.

Considering all the conflicting research around eggs, the Mayo Clinic asserts that it is probably fine for healthy people to eat six or seven whole eggs per week. The case is different for people with diabetes, high cholesterol or hypertension. The Mayo Clinic states that diabetics who eat seven eggs per week “significantly” increase their risk of heart disease. An analysis published in the Canadian Journal of Cardiology stated that participants in the Physicians’ Health Study who became diabetic during the course of the 20-year study were twice as likely to develop cardiovascular disease if they ate one egg per day. It also stated that new cases of diabetes were more likely for those who ate eggs regularly.

Therefore, while egg whites are good for everybody, for those with diabetes or who are at risk for heart disease, egg whites can be an excellent dietary option.

According to Kanter, “High-quality protein helps build muscles and allows people to feel full longer and stay energized, which can help them maintain a healthy weight.” Egg whites are an excellent source of protein, with 3.6 g of protein per 17-calorie egg white. That’s about 5 percent of your daily protein needs.

“Although we often think of protein’s function in building and maintaining muscle, newer research suggests other benefits of protein," Kanter told Live Science. "For example, numerous studies since 2010 have found that protein-rich breakfasts, including those containing eggs, result in blunted postprandial glucose and insulin responses, greater satiety, and lower energy intake at a subsequent meal, suggesting a positive role of eggs for hunger and weight management.” A study published in the American Journal of Clinical Nutrition looked at protein-rich breakfasts in overweight or obese adolescent girls and found that high-protein breakfasts were associated with less evening snacking, as well as positive changes in “appetitive, hormonal, and neural signals that control food intake regulation.”

One egg white contains 54 mg of potassium, a vital mineral and electrolyte associated with heart health, bone health and overall effective cell and organ functioning, according to the University of Maryland Medical Center. Many studies have linked potassium with lower blood pressure because it promotes vasodiliation (widening of blood vessels), according to Today’s Dietitian. A study of 12,000 adults, published in Archives of Internal Medicine, showed that those who consumed 4,069 mg of potassium each day lowered their risk of cardiovascular disease and ischemic heart disease by 37 percent and 49 percent, respectively, compared with those who took 1,793 mg per day.

“Diets higher in protein have been linked with lower risk of developing hypertension,” said Kanter, and new research shows that egg whites might be particularly helpful. In an animal study announced by the American Chemical Society, scientists at Clemson University discovered that a peptide called RVPSL (a component of protein) found in egg whites “reduces blood pressure about as much as a low dose of Captopril, a high-blood-pressure drug.” It blocks angiotensin-converting enzymes, which are produced by the body and increase blood pressure.

Kanter noted that egg whites are a good source of riboflavin, also known as vitamin B2. Sixty-two percent of an egg’s riboflavin is contained in the white. This vitamin is associated with releasing energy from carbohydrates, thereby helping metabolism, and producing red blood cells, according to the National Institutes of Health, which lists eggs on its list of good sources of riboflavin. It also works as an antioxidant, breaking down dangerous free radicals (molecules that can damage or kill cells), according to the University of Maryland Medical Center.

An American Journal of Clinical Nutrition article discussed the problems associated with riboflavin deficiencies. These included anemia, homocysteine levels that are associated with cardiovascular disease, and increased risk of cancer in animal trials.

The protein content in egg whites has made them a popular folk treatment for hair and skin care. There is no scientific evidence to back these claims up, however.

While egg whites are a good source of protein and a great option for those suffering from diabetes, high cholesterol or cardiovascular disease, people should be careful not to assume that egg whites provide all the same nutritional benefits of whole eggs. “Most of the vitamins and minerals are contained in the yolk,” said Kanter. “Nutrients found exclusively in the yolk include choline, vitamin B12, vitamin D and iron among others.”

A study published in The American Journal of Clinical Nutrition in 2002 caused a stir when it found that raw egg whites interfere with absorption of biotin. Biotin is a B vitamin that is important to fat and sugar metabolism and blood sugar regulation, according to World’s Healthiest Foods. Egg whites contain a glycoprotein called avidin, which binds to biotin and makes it absorbable by the digestive tract. This problem is solved by cooking egg whites.

When raw, both egg whites and whole eggs can present a risk of infecting eaters with salmonella. The Centers for Disease Control recommends cooking all types of eggs until both the white and yolk are firm.

Some people are allergic to proteins in egg yolks and egg whites, but egg-white allergies are more common, according to the Mayo Clinic. As many as 2 percent of children are allergic to eggs, according to the American College of Allergy, Asthma & Immunology. Fortunately, studies show that about 70 percent of children with an egg allergy outgrow it by age 16. Allergic reactions range from a mild rash to stomach pain to anaphylaxis, which impairs breathing and can send the body into shock.