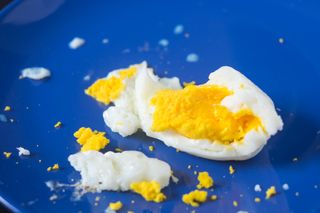 Superheated liquid inside an egg is likely the cause of an explosive pop heard when an egg is microwaved in its shell.
(Image: © montreep/Shutterstock.com)

Hot splatter on your tongue, loud ringing in your ears — these are the consequences of biting a microwaved egg without thinking.

Hard-boiled eggs don't react well (or, depending on the perspective, react extremely well) to microwaves. Heat one up in a microwave and — assuming it doesn't burst while the timer is still running — there's a good chance it will go off with a pop and a rain of hot gloop as soon as it's disturbed.

But just how loud is  that pop? That's the subject of a lawsuit — and a related scientific discovery — hinging on the acoustics of exploding eggs. [The Mysterious Physics of 7 Everyday Things]

Somewhere in America, sometime in the past (the details remain unclear) someone walked into a restaurant and bit into an egg. That egg had been reheated in a microwave, and exploded when the poor patron bit through its benign-looking skin. The patron, severely burned, sued the restaurant, and claimed to have suffered hearing loss from the pop in addition to the more obvious wounds, according to a news release.

Charles M. Salter Associates, a San Francisco-based firm specializing in acoustics, was hired to offer expert testimony in the litigation. Specifically, they were hired to answer this question: Could an exploding egg create a powerful-enough pressure wave to cause hearing damage?

In an unpublished paper presented today (Dec. 6) at the 174th Meeting of the Acoustical Society of America and provided to Live Science, researchers Anthony Nash, vice president of Charles M. Salter Associates, and Lauren von Blohn, an acoustics consultant at the company, described the results of their study of exploding microwaved eggs.

Nash and von Blohn individually microwaved nearly 100 shelled, hard-boiled eggs for their study. Because the eggs sometimes burst while still cooking in the microwave, the researchers placed them inside thin socks before dropping them in beakers of water to heat up.

Then they — carefully — pulled the eggs out of the flask in the microwave and placed them on the floor. With a precise microphone just a foot away, they pierced the eggs with fast-acting meat thermometers, causing some of them to explode. [Watch a Video of Popcorn Exploding]

The pops they recorded were pretty loud, with pressure waves peaking between 86 and 133 decibels. That was akin to the sound of a typical motorcycle running 30 feet (9.1 meters) away to the sound of a jet plane 100 feet (30 m) away, respectively. An exploding egg certainly generates more noise than you'd want to subject yourself to for any length of time, but has a "low probability" of being loud enough to damage your hearing in a single pop, the researchers wrote.

Why does an egg explode at all?

If you stick a potato in the microwave without piercing its skin first, steam pressure can build up under the skin and cause the potato to detonate. That's a simple mechanism for an explosion, the researchers wrote, similar to a grenade going off and shattering the device's outer shell.

But a hard-boiled egg doesn't have a skin with the high tensile strength of a potato's, and an eggshell — designed for a baby bird to peck through — isn't strong enough to contain high internal steam pressure. There is a membrane between the white of an egg and its shell that might allow pressure to build up, but that comes off when you shell an egg and shelled eggs still pop. [10 Weird and Terrifying Medical Instruments from the Past]

The researchers suggested an alternative explanation.

The yolk of an egg, they discovered with their meat thermometer, heats up much faster than the surrounding water. Perhaps, they reasoned, tiny pockets of water are getting trapped inside the proteins and getting superheated.

At normal air pressure, those pockets would have room to expand and turn into steam. But inside an egg, pressure from surrounding, hardening proteins might be forcing the pockets to remain liquid even as their temperatures climb.

But disturb one of those pockets, let it expand, and the water molecules would rush to fill the void — expanding, disrupting the surrounding tissue, and allowing any other pockets to flash through a phase change at the same time. The resulting collective bubble-bursting would tear the egg to bits, flinging the pieces far and wide in a way that might resemble a more typical explosion under pressure.

"To an observer, the egg appears to have exploded," the researchers wrote in the paper, but, "it is probably more accurate to describe the phenomenon as a rapid boiling of superheated water."