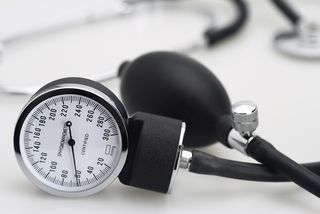 High blood pressure, or hypertension, is a serious disease that can, over time, damage the blood vessel walls and increase a person's risk of heart attack, stroke and other conditions.

Blood pressure is recorded as two numbers and written as a ratio: the top number, called the systolic pressure, is the pressure as the heart beats. The bottom number, called the diastolic pressure, is the measurement as the heart relaxes between beats. According to guidelines announced in November 2017 by the American Heart Association (AHA), people's blood pressure measurements fall into the following categories:

Most of the time, doctors cannot find a specific cause of hypertension, and this is known as essential hypertension. Certain factors increase the risk of developing hypertension, including being obese, drinking too much alcohol, eating a lot of salt, smoking and having diabetes. Aging also increases the risk of hypertension because blood vessels become stiffer with age, the NIH says. About 65 percent of U.S. adults ages 60 and older have high blood pressure, according to the National Heart, Lung and Blood Institute (NHLBI).

Being under stress can also increase your blood pressure temporarily, but stress is not a proven risk factor for hypertension. Still, some studies have linked mental stress and depression with risk of high blood pressure. A 2003 study published in the Journal of the American Medical Association found that people who felt pressed for time or were inpatient had higher odds of developing high blood pressure over a 15-year period, than people who did not feel such time pressure.

Certain medical conditions and medications can also raise blood pressure, and this is known as secondary hypertension. Conditions such as chronic kidney disease, preeclampsia during pregnancy, and disorders of the adrenal gland can cause high blood pressure.

People with high blood pressure usually have no symptoms, and so patients can have the condition for years without knowing it, according to NHLBI.

"We call it the 'silent killer,'" because patients are often asymptotic, said Dr. Andrew Freeman, a cardiologist at National Jewish Health in Denver.. In rare cases, some people with high blood pressure experience headaches.

Although many patients may not have symptoms at first, over time, high blood pressure can lead to "wear and tear" on the body, Freeman said. For example, high blood pressure can stretch and damage blood vessels, which in turn, can increase the risk of health problems, according to the American Heart Association. Stretched blood vessels can have weak spots that are more likely to rupture, leading to a hemorrhagic strokes or aneurysms, AHA says. Stretching of the blood vessels can also cause tears and scars that create places for cholesterol or blood to build up.

Because a person's blood pressure can vary depending on a number of factors, including the time of day, a doctor will usually check blood pressure several times and different appointments before diagnosing someone with high blood pressure.

Doctors may measure blood pressure in both arms to see if there is a difference in readings, the Mayo Clinic says. A 2014 study published in the American Journal of Medicine found that people whose systolic blood pressure readings differed by 10 mmHg or more between their right and left arms were nearly 40 percent more likely to have cardiovascular problems, bush as a heart attack or stroke, over a 13-year period.

Doctors may also recommend other tests to look for indicators of heart disease, such as high cholesterol, the Mayo Clinic says

"High blood pressure is really a disease of the Western world, and if we can do our best to work on diet and exercise and stress relief, we could take a huge amount of this burden down," said Freeman.

Lifestyle changes — including changes in diet and physical activity — and medications are recommended for treating high blood pressure.

But many people with hypertension will need take medications, as well as make lifestyle changes, the NHLBI says. For example, the new guidelines recommend that doctors only prescribe blood pressure medication for patients with stage I hypertension if they have already had a cardiovascular "event" such as a heart attack or stroke; or if they are at high risk for a heart attack or stroke based on other factors, such as the presence of diabetes.

People with stage 1 hypertension who don't meet these criteria should be treated with lifestyle modifications. These include: starting the "DASH" diet, which is high in fruit, vegetables and fiber and low in saturated fat and sodium (less than 1,500 mg per day); exercising for at least 30 minutes a day, three times a week; and restricting alcohol intake to less than two drinks a day for men and one drink a day for women, said vice chairman of the new guidelines, Dr. Robert Carey, a professor of medicine and dean emeritus at the University of Virginia Health System School of Medicine.

In addition, stress relief practices, such as meditation or other relaxation techniques, can also be helpful in lowering blood pressure, especially when combined with other lifestyle changes, Freeman said.

Some of the more common types of blood pressure medications include:

Side effects from blood pressure medication tend to be minor, and can include cough, diarrhea, dizziness, feeling tired, headaches, and unintentional weight loss and skin rash, according to the NIH. Patients should notify their doctor if they experience side effects, and often times, the doctor make changes to the dose or type of medication to reduce side effects.