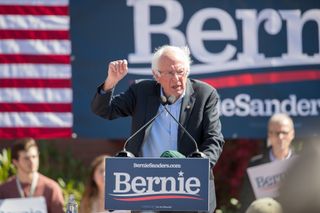 UPDATE: On Oct. 4, the Bernie Sanders presidential campaign confirmed that the senator had suffered a heart attack and was treated for the condition at Desert Springs Hospital Medical Center in Las Vegas. Campaign spokesman Mike Casca said that Sanders would travel to Burlington, Vermont to recover before returning to the campaign trail. Live Science published this article (below) on Oct. 2.

The sudden medical procedure begs the question: How serious is this heart condition, and how might it affect Sanders' future health?

"Following medical evaluation and testing, he [Sanders] was found to have a blockage in one artery, and two stents were successfully inserted," Weaver said. "Senator Sanders is conversing and in good spirits. He will be resting up over the next few days."

Stents are a type of treatment for coronary artery disease, the most common type of heart disease in which the coronary arteries become narrowed or blocked, usually from the buildup of cholesterol and fat deposits called plaques.

Coronary arteries are the blood vessels that carry blood to the heart muscle, and their blockage can cause pain in the chest, shortness of breath and even a heart attack, according to the Mayo Clinic.

To open up the arteries, surgeons can insert stents, or tiny mesh wire tubes. These devices hold the artery open so blood can flow more freely. Although serious in the sense that the procedure involves arteries and cardiac tissue, the surgery is "routine" and "relatively safe," said Dr. Laurence Epstein, the system director of electrophysiology at Northwell Health in Manhasset, New York, who is not involved with Sanders' care."This is not really heart surgery in the way that people think of [it]," he said.

How do stents work?

Decades ago, treating coronary artery disease meant having to open up a person's chest and bypass the blocked artery altogether, Epstein said. Now, doctors can insert a stent instead.

A stent scaffolds the inner lining of an artery and "literally squishes the plaque up against the wall," Epstein said. The procedure involves inserting a flexible tube, called a catheter, through an artery in the leg or the wrist and guiding it to the blockage. A balloon attached to the end of the catheter supports the wire mesh and puffs up to push the stent into place.

"The stents these days are coated with a drug that prevents the body tissues from growing [over the wire mesh] and causing re-blockages," added Dr. Sripal Bangalore, an interventional cardiologist and professor of medicine at NYU Langone Health, who was not involved in Sanders' care. Only 2 to 3% of patients develop re-blockages within a year of their procedure, he said.

"The procedure works very well," said Dr. Quinn Capers, an associate professor of cardiovascular medicine at The Ohio State University College of Medicine, who did not treat Sanders. The wire mesh reopens the blocked artery quickly and effectively, so "patients usually feel better right away."

Each year, about 1 million people in the U.S. have a stent inserted into their coronary artery, according to estimates from iData Research, a healthcare market research company. Even so, there is some controversy surrounding these devices, as some health experts argue that stents are overused and overhyped. A study published in 2017 in the journal The Lancet found that people who took heart medicines for chest pain had outcomes similar to those of people who got stents.

However, the controversy only applies to patients in stable condition, said Capers. These patients can elect to get stents or get by on medication alone, though they will take more medications without stents intact, he said. But when a patient's condition worsens very quickly, there is "no controversy" that placing stents is the best course of treatment, he added.

Since Sanders just had stents placed,  he will likely be placed on a "secondary prevention" protocol, Epstein said, meaning the senator will undergo treatment to prevent further plaques from forming in his coronary arteries. Most likely, doctors will monitor the fat content of his blood, recommend he adjust his diet and exercise routine, and place him on medications to control his cholesterol levels and prevent blood clots from forming around the newly placed stents.

Sanders' emergency surgery came as a surprise to those awaiting his campaign speeches. So why did the senator need to be treated so quickly?

If a person with coronary artery disease (CAD) experiences occasional chest pain — known as angina — when they physically exert themselves, their condition is considered stable, and stents aren't urgent. However, "if it was unstable angina, it makes it more of an urgent situation," Epstein said. Unstable angina means that a patient's chest pain has become more frequent, more painful or longer-lasting, or that it might be provoked by less physical exertion than before. The worsening trend implies that plaque may be building up rapidly, meaning less blood is reaching the heart and the plaque itself may soon rupture, triggering blood clots and a subsequent heart attack.

There is a type of unstable angina that doctors consider "low-risk," said Bangalore, and in these cases patients may opt to start with pharmaceutical treatment rather than getting a stent right away. But in about 40 to 50% of cases, CAD patients must have stents placed very quickly to prevent a possible heart attack, said Capers. "The plaque...can go from blocking about 30 percent of the artery to exploding like a volcano," he said.

It has not been reported exactly why Sanders' procedure was so urgent.

Stents aren't a cure for coronary heart disease, Capers said — patients must stick to their medication regimen and follow a healthy lifestyle to treat the underlying condition.In the long run, most people who receive stents can stabilize their condition by taking these precautions..

"There's plenty of people that have stents that live for years and years and years," and the procedure often doesn't interfere with them doing their jobs, Epstein said. If treated aggressively, he added, the plaques can even shrink, and the condition can be reversed.