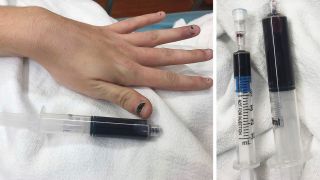 The woman's skin had a bluish tint, and her drawn blood appeared a deep blue color.
(Image: © The New England Journal of Medicine 2019)

A woman in Rhode Island went to the emergency room when her skin and blood took on an odd hue: She was turning blue, according to a new report of the case.

"I'm weak and I'm blue," the 25-year-old told her doctors, according to Otis Warren, a physician at Miriam Hospital who treated the woman and spoke to NBC News. The patient reported applying "large amounts" of topical benzocaine, a numbing medication, on an aching tooth the night before, Warren and colleagues wrote in the report about the woman's case, published Sept. 19 in The New England Journal of Medicine.

The medication can have an unusual and potentially dangerous side effect: Benzocaine can cause iron in the blood to give up electrons, change form and no longer bind properly to oxygen, according to NBC. The body relies on sturdy bonds between iron and oxygen to move the life-sustaining element through the body. Without adequate oxygen, normally red blood can turn blue, and the skin and nails soon follow.

The condition, called methemoglobinemia, essentially suffocates the body's tissues and can cause serious damage if blood oxygen levels drop below 70%, according to Medscape.

Related The 9 Most Bizarre Medical Conditions

In this case, blood drawn from the patient's arteries appeared deep navy blue, when it should have been bright red, according to the case report. What's more, her blood oxygen level had dipped to 67%, when it should have been hovering near 100%, NBC reported. The doctors quickly administered a medication called methylene blue, which restores iron to its proper form within the blood.

After two doses of the drug and a night in the hospital, the patient's normal coloring returned, her blood oxygen levels rose and she went home went home having fully recovered.