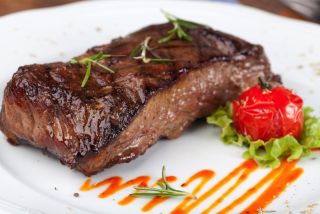 Just in time to dampen your summer cookout plans, scientists have found that the iron in red meat may raise your risk for heart disease, while iron in vegetable sources such as beans seems to have no ill effect.

The findings may contribute to a better understanding of the connection between meat-heavy diets and heart disease, the researchers said.

The type of iron in question is called heme iron, which is found in animal-based foods, particularly beef. Heme iron is absorbed much better by the body compared to with the non-heme iron found in vegetables. For this reason, experts recommend meat as a source of dietary iron, an essential nutrient.

But heme iron's excellent bioavailability — perhaps a bit ironically — enables it to bypass the body's finely tuned iron-regulation system, and ultimately cause inflammation and other damage in the arteries, a new analysis suggests. The study, by scientists at Indiana University School of Public Health in Bloomington, will appear in an upcoming issue of the Journal of Nutrition.

Too much iron in the blood has long been suspected to contribute to heart disease and even cancer, but studies have been inconclusive. In the new research, the scientists analyzed 21 previous studies involving nearly 300,000 participants over about 10 years. [7 Foods You Can Overdose On]

This new analysis is unique because it is the first of its size to consider the independent effects of heme, non-heme and total iron on people's risk of coronary heart disease. The participants who consumed the most heme iron — that is, iron obtained by eating any kind of meat or fish — had a 57 percent increase in the risk of developing heart disease, compared with those who consumed the least amount of heme iron.

In contrast, non-heme iron at any level in the diet was not associated with an elevated risk of heart disease, the researchers said.

Iron is a primary component of hemoglobin, the protein in red blood cells that transports oxygen through the body. In healthy people, when the body detects that there is enough iron in the blood, it attempts to limit the amount of iron absorbed from food.

In general, though, the body absorbs heme iron much more efficiently than it does non-heme iron — at a rate of about 35 percent versus 5 percent. This is because the heme iron molecule, which comes from animal hemoglobin (in blood) and myoglobin (in muscle), has a special, circular shape that's recognized by cellular heme transporters, allowing the molecule to be ferried across cell membranes.

"The unique structure allows it to be more easily absorbed, even among individuals who already have enough iron in their body," Hunnicutt said.

Foods with the highest concentration of heme iron include beef and any kind of liver, along with clams, oysters and other mollusks.

But before you shun meat for its iron, note that the analysis comes with several caveats. Numerous studies have shown that vegetarians, particularly children on vegetarian diets, are highly susceptible to iron-deficiency anemia, which is marked by weakness, fatigue, and poor concentration and learning.

Indeed, iron-deficiency anemia is a global public health concern affecting hundreds of millions of children and women (who lose blood, and thus iron, in their monthly cycles).

And as thorough as the new analysis may be, it remains difficult to isolate effects of heme iron from other components of a diet, said Dr. John J. Strouse, an expert on pediatric hematology at Johns Hopkins University School of Medicine, who was not involved in this study.

"There are many potential confounders of the relationship between heme iron and coronary heart disease," Strouse said. "They include increased saturated fat and possibly lower intake of fruits and vegetables in those with increased intake of meat."

The study researchers noted that more work is needed to establish whether there is a cause-and-effect relationship between heme iron and heart disease.