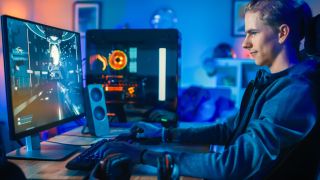 The report, from researchers in Australia, describes three unrelated cases of children who fainted while playing electronic war games. All of these children had underlying conditions that affect the heart's electrical system and can be life-threatening. But in two of the cases, the child's heart problem wasn't discovered until after they fainted while gaming.

The intense, emotionally-involved play of the games may result in the release of stress hormones that could be a trigger for heart rhythm problems in susceptible people, experts said.

In the first case, a 10-year-old boy suddenly lost consciousness at home after winning the war game he was playing, according to the report, published Sept. 19 in the New England Journal of Medicine. He soon regained consciousness and seemed alright. But later, the boy experienced a cardiac arrest at school due to a life-threatening condition known as ventricular fibrillation, in which the heart quivers instead of beating properly. He was diagnosed with a rare condition called catecholaminergic polymorphic ventricular tachycardia (CPVT), a heart rhythm disorder that results from a genetic mutation, according to the National Institutes of Health.

The second case involved a 15-year-old boy who had previously undergone heart surgery to repair a hole in his heart that he was born with. The boy started to faint right as he was about to win the war game he was playing. He was diagnosed with ventricular tachycardia, a heart rhythm disorder in which the heart beats faster than normal, and the lower heart chambers are out of sync with the upper chambers, according to the Mayo Clinic.

The boy received a device known as an implantable cardioverter-defibrillator (ICD), which detects and stops abnormal heartbeats. About two months later, the boy experienced another episode of ventricular tachycardia, again while he was about to win his game. But the ICD successfully restored his heart rhythm.

In the third case, an 11-year-old boy collapsed after having heart palpitations while "animatedly playing an electronic war game with a friend," the report said. He regained consciousness and was diagnosed with long-QT syndrome, a heart rhythm condition that can cause irregular heartbeats. The condition can be genetic, and the boy later had two family members diagnosed with long-QT syndrome.

Dr. Ronald Kanter, a cardiologist and director of electrophysiology at Nicklaus Children's Hospital in Miami, who wasn't involved in the report, said he hadn't heard of electronic games triggering heart rhythm problems prior to this study. However, Kanter said he wasn't surprised that it happened.

"Anything that causes a sudden surge of the body's stress hormone adrenaline can put vulnerable patients at risk of going into a dangerous heart rhythm," Kanter told Live Science.

Both long-QT syndrome and CPVT are notorious for causing heart rhythm problems triggered by emotional stress, in addition to physical stress, he added.

"These electronic games are emotionally stressful, that's part of the thrill of them," Kanter said. "It shouldn't surprise anybody really."

Heart conditions that can lead to dangerous rhythm problems are not all that rare, Kanter said.

However, "the likelihood of a youngster who participates in electronic gaming having an event is probably very very uncommon," given that so many young people do this kind of gaming, he said.

What's more, children diagnosed with heart rhythm problems were once told they couldn't play high-intensity sports. But now, even those recommendations are changing, Kanter said.

For example, in some cases, people with long-QT syndrome may be able to participate in competitive sports, after carefully reviewing the risks and benefits with a doctor, the Mayo Clinic says.

Kanter said there will likely be a lot of discussion and research going forward on whether children with heart rhythm problems should avoid electronic games. With this one report, "we're only at the beginning of that experience," he said.