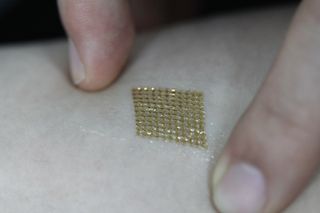 An ultrathin and stretchable device that sticks to your skin like a sticker could one day be used to monitor your heart rate, according to a new report.

The researchers who designed the device say it could be used by patients who need to have their heart rates monitored continuously, such as those who suffer from heart problems like arrhythmia (abnormal heart rhythms), or who have a greater risk of a heart attack.

Moreover, the device could be useful for people who are have an increased risk of cardiovascular disease, because it could measure how fast the heart goes back to its resting rate after exercise, which is an important indicator of cardiovascular health, the researchers said.

The researchers are planning to make the device commercially available, but they estimate it will take several years to do this, said study author Dae-Hyeong Kim of the Institute for Basic Science in Seoul, Korea. However, in the near term, the device's technology can be used to modify or improve existing health-monitoring devices, Kim told Live Science. [10 Technologies That Will Transform Your Life]

In contrast, the new device is very thin and stretchable, and therefore conforms to the skin more closely, allowing for the heart rate to be detected with greater accuracy.

To make the device, the researchers used a stretchable silicone membrane that contains closely packed gold nanoparticles, which boost the device's capacity for long-term memory storage, the researchers said. The device also contains electrocardiogram (ECG) sensors and amplifiers that monitor a user's heart rate while staying in close contact with the skin.

To attach the device onto a user's skin, the device is first transferred onto a piece of transparent, stretchable material, and then placed on the skin. With the type of substrate material that is currently being used — thin silicone rubber — the device can stay on the human skin for several days, Kim said.

But if the researchers were to modify the tackiness and thickness of the material, the device could be reused multiple times and stay on the skin for about a week, Kim said.

The new report on the device is published today (Jan. 1) in the journal Science Advances.