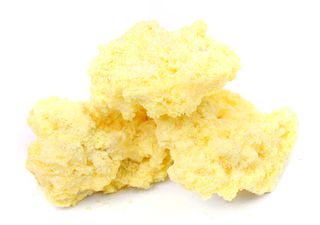 Ick, what's that smell? If the stench is of rotten eggs, it might just be the fault of sulfur. This bright yellow element, known in the Bible as "brimstone," is abundant in nature, and was used for a variety of purposes in ancient times.

A nonmetal, sulfur is the 10th most abundant element in the universe, according to the Jefferson National Linear Accelerator Laboratory. Today, it's most common use is in the manufacture of sulfuric acid, which in turn goes into fertilizers, batteries and cleaners. It's also used to refine oil and in processing ores.

Pure sulfur has no smell. The stink associated with the element comes from many of its compounds, according to Chemicool. For example, sulfur compounds called mercaptans give skunks their defensive odor. Rotten eggs and stink bombs get their distinctive aroma because of hydrogen sulfide.

According to the Jefferson Lab, the properties of sulfur are:

An element of biblical proportions

"On the wicked he will rain fiery coals and burning sulfur; a scorching wind will be their lot." — Psalm 11:6

Few elements are high profile enough to get a mention in the Bible, much less 15 separate call-outs. But sulfur occurs frequently in compounds in nature, usually as a stinky, yellow mineral associated with hot springs and volcanoes, perhaps explaining why the authors of the Bible associated it with hellfire and wrath.

The element itself was not isolated until 1809, according to the Royal Society of Chemistry, when French chemists Louis-Josef Gay-Lussac and Louis-Jacques Thénard created a pure sample. (Gay-Lussac was known for his research on gases, which involved him flying in hydrogen-filled balloons more than 22,900 feet (7,000 meters) above sea level, according to the Chemical Heritage Foundation.)

When burned, sulfur produces a blue flame and sulfur dioxide gas — a common pollutant, according to the Environmental Protection Agency. Sulfur dioxide in the atmosphere comes mostly from fossil-fuel power plants and is one of the primary causes of acid rain. The gas is also a lung irritant. The EPA regulates sulfur dioxide emissions along with five other so-called "criteria pollutants," including lead and carbon monoxide.

Today, sulfur is a byproduct of the refinement of fossil fuels into usable energy sources like gasoline. This refinement is a good thing for preventing sulfur compounds from heading skyward when the fuel is burned, causing acid rain. But it leads to hills of elemental sulfur piling up in refineries.

About 90 percent of this elemental sulfur goes to make sulfuric acid, said Jeff Pyun, a biochemist at the University of Arizona. But "since we go through millions of barrels of oil a day, a few percent [sulfur] a barrel just piles up quickly," Pyun said. With nearly 100 million tons of waste sulfur produced a year, the 10 percent not used in sulfuric acid production comes out to a not-insignificant 10 million tons a year.

What to do with this yellow mess? Pyun and his colleagues think they have an answer. They've found a way to turn waste sulfur into plastic, which in turn can be used in thermal imaging devices and lithium-sulfur batteries.

"It was a tremendous challenge, and we were the first crazy people to get really serious about it," Pyun told Live Science.

Sulfur is tough to work with because it doesn't dissolve in other chemicals easily. That was the first frustration Pyun and his team of researchers from Korea, Germany and the United States had to face.

"It didn't want to dissolve," Pyun said. "It just made yellow stuff everywhere, all over my lab."

At the end of their ropes, the researchers decided just to melt the stuff. It turns out that sulfur becomes a polymer — a long chain of linked molecules that is the basis for plastics — automatically when heated above 320 F (160 C). That reaction has been known for more than a century, Pyun said. But the polymer falls apart almost as easily as it forms, making it useless for practical applications.

But this polymer phase gave the researchers a window to "throw in something, potentially, that it would react with" to stabilize the plastic, Pyun said. Fortunately for the team, one of the first chemicals they tried turned out to be a winner: 1 3-diisopropylbenzene, easier known as "DIB."

"DIB works so nicely because it had reactive groups that could react with sulfur when it was polymerizing," Pyun said. "It was completely soluble in liquid sulfur."

The result, as the researchers reported in April in the journal Nature Chemistry, was a red plastic that doesn't even smell like rotten eggs — the polymerizing sulfur is not volatile, Pyun said, and thus doesn't reek like the volatile sulfur compounds one might find at a hot springs.

Even better, the process is so simple that Pyun and his colleagues call it "cave man chemistry." The simplicity and low cost make it an attractive option for industry, Pyun said. The team has been approached by several companies interested in taking the sulfur polymerization process commercial.

"We're only going to produce more sulfur," he said, adding that they refer to sulfur as the “garbage of transportation” because it is the byproduct of petroleum refining. With any luck, his team's process can turn that garbage into something useful.

Elemental sulfur is a commonly used pesticide on many American and European farms. It is approved for use on both conventional and organic crops to help control fungus and other pests. In California alone, more than 21 million kilograms (46.2 million pounds) of elemental sulfur was used for agriculture in 2013, according to Berkeley News.

Although the Environmental Protection Agency (EPA) has labeled elemental sulfur as generally safe, studies have shown that this type of pesticide is a respiratory irritant to farmworkers.

Now, a new study by researchers at the University of California, Berkeley, has gone a step further and looked at the respiratory health of residents living near treated fields — specifically, hundreds of children living in the agricultural community of Salinas Valley, California. Their findings were published in August 2017 in the journal Environmental Health Perspectives.

The researchers found that children living within a half-mile from recent elemental sulfur applications had reduced lung function, higher levels of asthma-related symptoms and greater asthma medication use, compared to unexposed children.

Specifically, they found that a 10-fold increase in applied sulfur within 1 kilometer (0.62 miles) of the child's residence during the year before the respiratory evaluation was associated with a 3.5-fold increased risk for asthma medication use and double the risk for respiratory symptoms, such as wheezing and shortness of breath, according to Berkeley News.

The study authors urgently call for more research to confirm these findings in the hope that it will lead to changes in regulations and application methods to limit respiratory harm on nearby residents. According to the researchers, one idea is to switch to "wettable" powders.