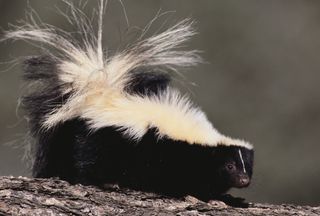 The striped skunk is found across most of southern Canada, all over the United States and in northern Mexico.
(Image: © Volt Collection)

Skunks are small, furry animals with black and white stripes. Some skunks are striped, and some are spotted or have swirl patterns on their fur. No matter the pattern, the black-and-white coloring is a warning sign to anyone who may harm this small creature. They pack a wallop of a defense mechanism — noxious odors produced from their well-developed scent glands.

These small stinkers are found in the United States, Canada, South America and Mexico. Stink badgers, which were recently considered part of the skunk family, are found in Indonesia and the Philippines.

Skunks live in forest edges, woodlands, grasslands and deserts. They typically make their homes in abandoned burrows, but will also live in abandoned buildings, under large rocks and in hollow logs.

The skunk’s most memorable trait is its smell. When frightened, skunks will shoot a smelly, oily substance from a gland underneath their tails with a range of up to 10 feet (3 meters), according to National Geographic. The scent from this gland can last for days, but isn’t harmful. Most animals leave skunks alone unless they can’t find other prey. Before spraying, a spotted skunk will do a handstand on its front paws and aim its tail without taking its eyes off its attacker.

It is important to remember that most skunks are not aggressive and won’t harm humans unless they are threatened, according to The Humane Society.

Skunks are nocturnal and forage for food while most animals and humans sleep. Though you typically see skunks by themselves, they gather to mate. A group of skunks are called a surfeit.

Skunks are omnivores, which means they eat both meat and vegetation. Their diet consists of plants, insects, larvae, worms, fruit, eggs, reptiles, small mammals and fish.

Little is known about the biology of stink badgers, according to the ADW.

Female skunks give birth every year. Their gestation period often lasts around two months and they give birth to two to 10 offspring at a time.

Baby skunks are called kits. Kits are blind when born, since their eyes are sealed shut until around the age of 3 weeks, according to the San Diego Zoo. They are weaned at 2 months old. After they are weaned, they leave the den and at to 10 to 12 months old they are ready to have their own kits.

Skunks have very short lives and often live only around three years. In captivity they can live a little longer, usually seven to eight years.

Until recently, skunks were considered part of the Mustelid family, related to weasels, otters and badgers. Molecular analysis has shown that skunks should be recognized as a single family, Mephitidae, according to the ADW. Also, stink badgers, which occur in Indonesia and the Philippines, have just recently been considered part of the skunk family.

Here is the classification of mephitids, according to the Integrated Taxonomic Information System (ITIS):

No skunk species is currently endangered, according to the International Union for Conservation of Nature. Except for one, all are listed on the union's Red List of Threatened Species as "least concern." The pygmy spotted skunk is listed as vulnerable due to and ongoing population loss estimated to be more than 30 percent over the past three generations of the species.

Before spraying, a skunk will often charge at an attacker, stomp its front legs or hiss.

Skunk are one of four wild animals considered to be primary carriers of the rabies virus, according to the Humane Society.

The Eastern spotted skunk is the only skunk that can climb trees, according to the ADW.