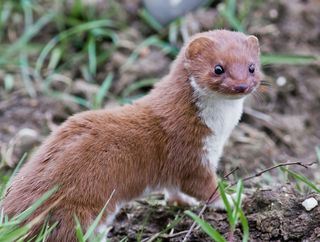 Weasels are small mammals with long bodies and necks, short legs and small heads. They are closely related to ermine, ferrets, polecats and minks — all members of the Mustela genus — and are in the same family (Mustelids) as badgers, wolverines and otters.

Weasels are usually brown, grey or black with white or yellowish markings. All weasels become all white in the winter, though. The winter fur of the least weasel glows a bright lavender color when exposed to ultraviolet light, according to the Nature Conservancy.

Weasels come in many sizes, but the most notable is the least weasel. It is the smallest carnivore in the world, according to Animal Diversity Web (ADW). They weigh about 1 ounce (25 grams) and grow to just 4 to 10 inches (11 to 26 centimeters) long.

The most common weasel is the short-tailed weasel. It can be found in North America, Europe and Asia, in regions as far north as the Arctic. Their homes include marshes, scrubs, hedgerows, alpine meadows, riparian woodlands and riverbank habitats, according to the International Union for Conservation of Nature and Natural Resources (IUCN).

As nocturnal animals, weasels sleep during the day and are active at night. Most of a weasel's time awake consists of hunting, storing excess food and eating. Their bodies don't store fat, so they need a constant supply of food to provide enough energy. In fact, the least weasel eats 40 to 60 percent of its body weight every day, according to the Nature Conservancy.

Though weasels can dig their own burrows quite quickly, they sometimes take over other animals' burrows and make them their own. They have even been known to take over termite hills.

Weasels' diets usually consist of rats, mice, voles and rabbits. Frogs, birds and bird eggs are also on the menu, from time to time. Their small, thin bodies allow them to squeeze into tight spots to reach small prey.

Females typically have one or two litters per year. They give birth to litters of up to 15 offspring, called kits, according to ADW. Gestation lasts about a month. However, the number of kits, the length of the gestation period, weaning age and sexual maturity varies with the species.

For example, long-tailed weasels mate in mid-summer, but implantation is delayed and the egg does not begin to develop until March, making the gestation period about 280 days, according to ADW.

Some species of weasel live up to 10 years, though many live three to five years.

This is the classification of weasels, according to the Integrated Taxonomic Information System (ITIS):

Most weasels are listed as least concern by the IUCN's Red List of Threatened Species. There are a few exceptions. The mountain weasel and Japanese weasel are listed as near threatened because their population has had a significant decline. The Colombian weasel is listed as vulnerable because of "a continuing decline in population due to ongoing deforestation" and has estimated population of around 1,300 mature adults.

In New Zealand, the weasel is considered an invasive species and a threat to native wildlife. The country plans to eradicate them by 2050, according to a 2016 Live Science article.

To kill its prey, a weasel will clamp down on the prey's neck and keep biting until the animal is dead.

Weasels stay warm by lowering their metabolism and curling into balls inside their burrows.

Before killing prey, weasels will bob back and forth and hop in a dance meant to intimidate the other animal.