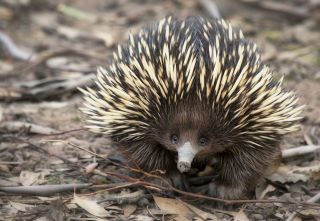 Echidnas are found only in Australia and New Guinea.
(Image: © Kristian Bell | Shutterstock)

Echidnas, also called spiny anteaters, are walking contradictions. They are mammals, but they lay eggs. They are often classified as long- or sort-beaked, but don't have beaks at all, in the traditional sense; they have fleshy noses that can be either on the long side or rather short. They don't really look like true anteaters (Myrmecophaga tridactyla), either, and they are not closely related to them. They are spiny, though; their bodies are covered with hollow, barbless quills.

Echidnas are monotremes, egg-laying mammals. The only other living monotreme is the platypus.

Both the male platypus and male echidna have spurs on their hind legs, but the animals use their spurs for drastically different reasons. Male platypuses use their spurs as a venomous weapon to help them compete against other males during breeding season. In contrast, male echidnas secrete a milky substance from their spurs during breeding season. Rather than acting as a poison, the echidna substance likely serves as a means of scent communication, a 2013 study in the journal PLOS ONE found.

The echidna's genetic makeup does code for four peptides that are also found in platypus venom, the researchers found. But these genes are not highly expressed in the echidna, indicating "that they are the remnants of the evolutionary history of the ancestral venom gland," the researchers wrote in the study.

Echidnas are found only in Australia and New Guinea. They have the widest distribution of any native mammal in Australia and prefer alpine meadows, coastal forest and interior deserts, according to the San Diego Zoo.

Echidnas are very solitary animals, but they are not territorial and are willing to share their home range with others of their kind.

They are active during the day, but in warmer months they will often become nocturnal to avoid the heat. Echidnas have body temperatures of 89 degrees Fahrenheit (32 Celsius) and very slow metabolisms. This is thought to be one of the reasons why they live up to 50 years, according to National Geographic.

Echidnas hibernate during the cold winter months in burrows. No matter what the time of the year, they can only enter REM sleep when they are around 77 F (25 C).

Echidnas have no teeth and only eat termites, ants and other soil invertebrates. They particularly love beetle larvae, according to the Australian Zoo. Their strong claws help them break open logs to get to termites that they scoop up with their long tongues, which can reach up to 7 inches (18 cm) long when extended.

Echidnas typically breed between July and August. Mating for echidnas is quite unusual. Males have four-headed penises and the females have a two-branch reproductive tract. Only two of the heads are active at a time. It is thought that the four heads help males produce more sperm and enables them to become more competitive against other males. [The Weirdest Animal Penises]

Sometimes, during hibernation, a male will come into a female's burrow and mate with her while she sleeps. She may wake up pregnant and not even know how she got that way, according to National Geographic.

A female usually lays one egg at a time. The egg goes into a pouch on her stomach to incubate. After seven to 10 days, the egg is ready to hatch, according to the Animal Diversity Web. When it hatches, a baby echidna, called a puggle, is about half an inch (12 millimeters) long and weighs 0.02 ounces or about half a gram. The puggle stays in its mother's pouch for another six to eight weeks, which give its spines time to harden.

Puggle drink their mother's milk until they are about seven months old. They don't suckle on nipples, though. The mother secretes milk through glands and the baby laps up the milk.

In captivity, echidnas can live up to 50 years, and possibly 45 years in the wild, though there is no definitive proof of lifespans in the wild.

Here is the taxonomy of an echidna, according to the Integrated Taxonomic Information System:

These creatures have an extra-long claw on the second toe that they use to groom their spines.

Both male and female echidnas have a pouch on the belly.

Echidna can feel vibrations through their noses.

An echidna has large, vertical slits just behind its eyes for ears. They also have extremely good hearing.

The Sir David's long-beaked echidna is named after British naturalist Sir David Attenborough, according to the San Diego Zoo.