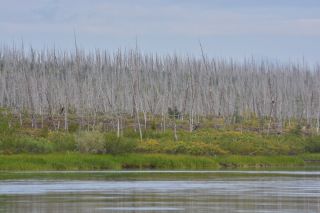 Dead trees line a riverbank near Norilsk, Russia, formerly a major industrial center in Siberia, and one of the most polluted cities in the world, according to National Geographic.
(Image: © Sergei Drozd/Shutterstock)

Acid rain, or acid deposition, is a broad term that includes any form of precipitation that contains acidic components, such as sulfuric acid or nitric acid, according to the Environmental Protection Agency (EPA).

The precipitation is not necessarily wet or liquid; the definition includes dust, gasses, rain, snow, fog and hail. The type of acid rain that contains water is called wet deposition. Acid rain formed with dust or gasses is called dry deposition.

The term acid rain was coined in 1852 by Scottish chemist Robert Angus Smith, according to the Royal Society of Chemistry, which calls him the "father of acid rain." Smith decided on the term while examining rainwater chemistry near industrial cities in England and Scotland. He wrote about his findings in 1872 in the book "Air and Rain: The Beginnings of a Chemical Climatology."

In the 1950s, scientists in the United States started studying the phenomenon, and in the 1960s and early 1970s, acid rain became recognized as a regional environmental issue that affected Western Europe and eastern North America.

Though manmade pollutants are currently affecting most acidic precipitation, natural disasters can be a factor as well. For example, volcanoes can cause acid rain by blasting pollutants into the air. These pollutants can be carried around the world in jet streams and turned into acid rain far from the volcano.

After an asteroid supposedly wiped out the dinosaurs 65.5 million years ago, sulfur trioxide was blasted into the air. When it hit the air, it turned into sulfuric acid, generating a downpour of acid rain, according to a paper published in 2014 in the journal Nature Geoscience.

Even before that, over 4 billion years ago, it is suspected that the air may have had 10,000 times as much carbon dioxide as today. Geologists from the University of Wisconsin-Madison backed up this theory be studying rocks and publishing the results in a 2008 issue of the journal Earth and Planetary Science Letters. "At [those levels of carbon dioxide], you would have had vicious acid rain and intense greenhouse [effects]. That is a condition that will dissolve rocks," said study team member John Valley. [Early Earth Marred by Acid Rain]

Sulfur dioxide (SO2) and nitrogen oxides (NOx) released into the air by fossil-fuel power plants, vehicles and oil refineries are the biggest cause of acid rain today, according to the EPA. Two thirds of sulfur dioxide and one fourth of nitrogen oxide found in the atmosphere come from electric power generators.

A chemical reaction happens when sulfur dioxide and nitrogen oxides mix with water, oxygen and other chemicals in the air. They then become sulfuric and nitric acids that mix with precipitation and fall to the ground. Precipitation is considered acidic when its pH level is about 5.2 or below, according to Encyclopedia Britannica. The normal pH of rain is around 5.6.

Acid rain affects nearly everything. Plants, soil, trees, buildings and even statues can be transformed by the precipitation.

Acid rain has been found to be very hard on trees. It weakens them by washing away the protective film on leaves, and it stunts growth. A paper released in the online version of the journal of Environmental Science and Technology in 2005 showed evidence of acid rain stunting tree growth.

"By providing the only preserved soil in the world collected before the acid rain era, the Russians helped our international team track tree growth for the first time with changes in soil from acid rain," said Greg Lawrence, a U.S. Geological Survey scientist who headed the effort. "We've known that acid rain acidifies surface waters, but this is the first time we've been able to compare and track tree growth in forests that include soil changes due to acid rain."

Acid rain can also change the composition of soil and bodies of water, making them uninhabitable for local animals and plants. For example, healthy lakes have a pH of 6.5 or higher. As acid rain raises the level of acidity, fish tend to die off. Most fish species can't survive a water pH of below 5. When the pH becomes a 4, the lake is considered dead, according to National Atmospheric Deposition Program.

It can additionally deteriorate limestone and marble buildings and monuments, like gravestones.

There are several solutions to stopping manmade acid rain. Regulating the emissions coming from vehicles and buildings is an important step, according to the EPA. This can be done by restricting the use of fossil fuels and focusing on more sustainable energy sources such as solar and wind power.

Also, each person can do their part by reducing their vehicle use. Using public transportation, walking, riding a bike or carpooling is a good start, according to the EPA. People can also reduce their use of electricity, which is widely created with fossil fuels, or switch to a solar plan. Many electricity companies offer solar packages to their customers that require no installation and low costs.