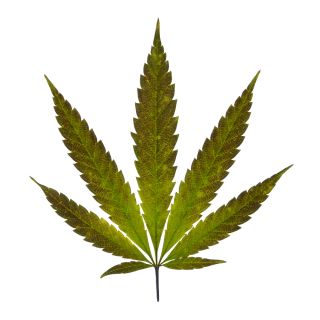 Marijuana is the slang term for portions of the Cannabis plant. It is one of the oldest psychoactive substances used by man.

Marijuana, also called pot, weed, ganja, mary jane, and a host of other nicknames, is made from the Cannabis plant, which has three species: Cannabis sativa; Cannabis indica and Cannabis ruderalis. The flowering plant, which can grow to 16 feet (5 meters) high, likely originated in the Central Asian steppe, near the Altai or Tian Shian Mountains, and was first cultivated in China and India, according to "Cannabis and Cannabinoids: Pharmacology, Toxicology and Therapeutic Potential," (Routledge, 2002).

The leaves, stems, flower buds and extracts from the marijuana plant can be eaten, brewed in a tea or put into a tincture. It can also be vaporized using an e-cigarette pen. Yale University researchers surveyed 3,847 Connecticut high school students about this practice in a 2015 study that was published in the journal Pediatrics. The study found nearly one in five e-cigarette users also have vaporize cannabis or byproducts like hash oil using the device.

"This is a relatively novel way of using marijuana, and kids are using it at a fairly high rate," said lead author of the study Meghan E. Morean in a Yale press release.

There are hundreds of compounds in marijuana, but scientists believe the one responsible for the drugs' psychoactive effects is tetrahydrocannbinol, or THC. THC binds to cannabinoid receptors throughout the body, and marijuana's "high" comes from THC's binding to brain regions responsible for pleasure, time perception and pain, according to the National Institute on Drug Abuse (NIDA).

This binding in turn triggers a chemical cascade that eventually stimulates the production of dopamine, a brain chemical often called the "feel good chemical," which is part of the body's reward system," said Mitch Earleywine, a psychology professor at the University at Albany in New York, who studies marijuana's health effects.

"Subjective effects really vary," Earleywine said. "Folks who like it emphasize the euphoria and the relaxation, and then depending on the strain, it's mildly stimulating, or mildly sedating."

Medical marijuana can soothe nausea and increase appetite, quiet pain, soothe anxiety and even reduce epileptic seizures. Other research on the healing effects of cannabis is being examined. For example, research suggests that THC may be able to improve memory according to a 2016 study on mice. More than half of the United States has legalized marijuana for medical use.

Short-term use of the drug impairs thinking and coordination. In long-term studies, teens who smoke marijuana have lower IQs later on, as well as structural differences in their brains, though scientists debate whether this is an effect of the drug or a result of habitual pot smokers seeking out less intellectually stimulating pursuits. A 2016 study on almost 300 students by the University of Montreal published in the journal Development and Psychopathology found that teens who start smoking around age 14 do worse on some cognitive tests by age 20 than non-smokers. They also have a higher school dropout rate. If they wait until age 17 to start, though, the smokers do not seem to have the same impairments, according to the study.

A 10,000-year-old archaeological site in Taiwan contains pottery fragments with a twisted strand imprinted around the edge, which some believe was made by pressing a rope made of hemp, the fibers made from the cannabis plant, across the wet clay, according to "Marijuana: The First Twelve-Thousand Years," (Springer, 1980).

Hemp fabric was widely used in ancient China to make clothing. A Chinese medicinal textbook, the Pen Ts'ao, which is credited to an emperor in 2800 B.C., claims that "Ma," or marijuana, was a powerful medicinal plant. Siberian burial mounds have traces of burnt cannabis seeds dating to 3000 B.C.

"We've had industrial use and medical use literally for millennia," Earleywine told Live Science.

The plant was first given its taxonomic identification by Carl Linnaeus in 1753 and thoroughly described to Westerners in the 1800s, when the medical doctor William O'Shaughnessy gave a report to the Medical and Physical Society of Calcutta in India in 1839. The doctor described its effects on people and did a few case reports on "gunjah," the Indian name for the drug.

"Almost invariably the inebriation is of the most cheerful kind, causing the person to sing and dance, to eat food with great relish, and to see aphrodisiac enjoyments," O'Shaughnessy wrote in his paper, "On the Preparations of the Indian Hemp, or Gunjah."

O'Shaughnessy also conducted some of the first clinical trials of the drug, giving tinctures to dogs, cats, mice and rabbits.

The Cannabis plant can grow up to 18 feet tall. In the Americas, Cannabis extract was a popular medicinal drug in the 1800s. But in the 1900s, the tide began to turn against the drug. In the 1920s, Mexican immigrants became associated with the smoked, recreational version of the drug, and anti-immigrant sentiments fueled marijuana prohibition.

By the 1930s, marijuana was banned in 24 states. The newly minted Federal Bureau of Narcotics launched a campaign against the drug, and newspapers fueled hysteria with headlines like the 1933 Los Angeles Examiner's "Murder Weed Found Up and Down the Coast — Deadly Marihuana Dope Plant Ready for Harvest That Means Enslavement of California Children." By 1937, Congress passed the Marihuana Tax Act, which effectively banned marijuana except for a few medicinal purposes, according to "Smoke Signals: A Social History of Marijuana – Medical, Recreational and Legal" (Scribner, 2012).

In the 1950s, the Narcotics Control Act and the Boggs Act stiffened penalties for marijuana possession, with first-time offenses requiring two to 10 year sentences and a minimum $20,000 fine, according to PBS.org. Penalties were relaxed in the 1970s, but President Ronald Reagan increased federal penalties for marijuana possession in the 1980s. On the federal level, marijuana is now regulated under the Controlled Substances Act as a schedule 1 drug, meaning the government considers it to have a high potential for abuse with no legitimate medical or therapeutic uses.

However, numerous states have decriminalized or legalized marijuana. As of early 2017, 26 states and the District of Columbia have legalized pot in some form of medical and/or recreational use, with other states soon to follow.

The Cannabis plant is quite hearty. It can grow up to 18 feet tall and is known to pop up along roadsides and driveways from stray seeds. Marijuana stems are thin and have thin, jagged leaves that branch into five to seven fingers. Cannabis flowers are small, greenish and grow in clusters.

Cannabis grown for industry is called industrial marijuana, or hemp. Hemp typically has very low concentrations of THC. Hemp has many uses. The seeds can be crushed for oil, food and beauty products. Hemp fibers can be used for paper, sturdy fabrics and rope. People have grown hemp for millennia.

Current U.S. federal law prohibits hemp farming with few exceptions. Hemp products, however, are legal and are imported from Canada, Russia, China and other nations that allow industrial marijuana farming.

Hemp hasn't always been on the wrong side of the authorities. The Puritans brought hemp with them to New England in 1645 and Europeans were growing it even earlier in Chile. George Washington planted hemp as one of several crops at his Mount Vernon estate. However, hemp's popularity waned in America as other plants used for textiles such as cotton and jute became more widely available. The U.S. Navy briefly campaigned for more hemp farming during World War II to supply ropes for ships. But the federal government continued restrictions on hemp after the war.