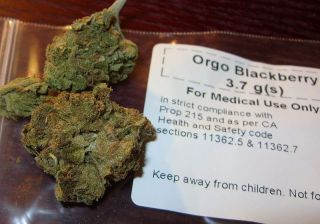 Medical marijuana is legal in 26 states, the District of Columbia and Guam. Proponents of marijuana, backed by several studies, say the drug has many therapeutic uses. Opponents — and the U.S. government — however, say it has a high potential for abuse and no legitimate therapeutic value.

Marijuana's medicinal uses can be traced back as early as 2737 B.C., when the emperor of China, Shen Neng, touted cannabis tea as a treatment for gout, rheumatism, malaria and even poor memory, writes Mitch Earleywine, a professor of psychology at the State University of New York at Albany who researches drugs and addiction, in "Understanding Marijuana: A New Look at the Scientific Evidence" (Oxford University Press, 2005). The drug's popularity as a medicine spread throughout Asia, the Middle East and then to Africa and India, where Hindu sects used it for pain and stress relief.

William O'Shaughnessy, an Irish doctor, popularized medical use of cannabis in England and America after noting its effects in India.

But by the late 1800s, with morphine addiction rampant in the United States, attitudes toward drugs such as marijuana shifted dramatically. As a result, the Food and Drug Administration was formed in 1906. While marijuana wasn't specifically mentioned in the original FDA guidelines, the move to control chemical substances curtailed its use as treatment.

By 1937, the Marihuana Tax Act [sic] imposed such high taxes on physicians prescribing cannabis, retail pharmacists selling cannabis, and those cultivating medical cannabis that it essentially fell out of favor as a treatment.

Medical marijuana is available in several different forms. It can be smoked, vaporized, ingested in a pill form or an edible version can be added to foods such as brownies, cookies and chocolate bars.

Because the federal Drug Enforcement Administration has classified marijuana as a schedule 1 drug — meaning it has a high potential for abuse and no legitimate therapeutic uses — it is exceptionally difficult to do high-quality studies on its medicinal effects in the United States, said Donald Abrams, an integrative medicine specialist for cancer patients at the University of California, San Francisco.

But the idea that marijuana may have therapeutic effects is rooted in solid science. Marijuana contains 60 active ingredients known as cannabinoids. The body naturally makes its own form of cannabinoids to modulate pain, Abrams said.

The primary psychoactive cannabinoid in marijuana is THC, or tetrahydrocannabinol. THC targets the CB1 receptor, a cannabinoid receptor found primarily in the brain, but also in the nervous system, liver, kidney and lungs. The CB1 receptor is activated to quiet the response to pain or noxious chemicals.

CBC, another cannabinoid, may be used to reducing pain and inflammation. It may also help in controlling epileptic seizures and treating mental illness and addictions, according to the National Institute on Drug Abuse.

A marijuana derivative, cannabidiol (CBD), was found to be beneficial in the treatment of severe epilepsy in a 2017 large-scale, randomized clinical trial published in the New England Journal of Medicine. Almost 40 percent of study participants experienced a significant reduction in seizures.

In a placebo-controlled, 2007 study in the journal Neurology, Abrams and his colleagues found that marijuana is effective at reducing neuropathic pain, or pain caused by damaged nerves, in HIV patients. Opiates, such as morphine, aren't effective at treating that sort of pain. Abrams said.

In another study, they found that marijuana, in addition to opiates, led to dramatic levels of pain relief. (Animal models have found similar effects).

"Cannabinoids plus opiates are synergistic in their relief of pain, so that 1+1 = 5 and not 2," Abrams told Live Science.

Researchers at the American Academy of Neurology have also found that medical marijuana in the form of pills or oral sprays seemed to reduce stiffness and muscle spasms in multiple sclerosis (MS). The medications also eased certain symptoms of MS, such as pain related to spasms, and painful burning and numbness, as well as overactive bladder, according to a number of studies.

A well-known effect of marijuana use is the "munchies," so it has been used to stimulate appetite among HIV/AIDS patients and others who have a suppressed appetite due to a medical condition or treatment. Medical marijuana is also frequently used to treat nausea induced by chemotherapy, though scientific studies of the smoked form of the plant are limited.

Two FDA-approved, chemically altered forms of THC, dronabinol and nabilone, have been shown to reduce chemotherapy-related nausea and vomiting in cancer patients. It is also used to help with the symptoms of AIDS, according to the U.S. National Library of Medicine.

Medical marijuana has also been touted as a treatment for glaucoma, which is an elevated pressure in the eyeball that can lead to blindness. While smoking marijuana may reduce intraocular pressure, marijuana must be consumed numerous times during the day to have the desired effect and other drugs are more effective, according to the American Cancer Society. Cannabidiol (CBD) is a non-psychoactive component of marijuana that has therapeutic benefits, but because it does not target the CB1 receptor, it doesn't leave people feeling stoned.

For example, a 2012 study published in the journal Translational Psychiatry found that cannabidiol may be effective in treating schizophrenia. In the study at the University of Cologne, 42 patients randomly received either cannabidiol or amisulpride, an effective drug used for the treatment of schizophrenia, for 28 days. Comparison of the clinical effects found "no relevant difference" between the two treatments.

A 2014 study by the College of Pharmacy of the University of South Florida that THC could be helpful in the therapeutic treatment of Alzheimer's disease, as well.

Marijuana does have side effects. THC binds to cannabinoid receptors, which are concentrated in areas of the brain associated with thinking, memory, pleasure, coordination and time perception. The effects of marijuana can interfere with attention, judgment and balance.

Studies have produced conflicting results on whether smoking marijuana carries a significant cancer risk. Medical marijuana "prescriptions" are termed "recommendations" or "referrals" because of federal laws prohibiting the prescribing of cannabis.

A 2016 study on 108 people by the University of Michigan Health System found that marijuana use may also make other addictions worse.

All the states require a doctor's approval. Many of the states that allow medical marijuana have an online application process.

Most of the laws allow dispensaries and outline specific conditions for which medical marijuana can be prescribed. The restrictions also vary by state as to the format and amount of medical cannabis that can be obtained at each visit for personal use.

You might not think marijuana and quizzes go together, but on the assumption that you arrived at this quiz sober, we pose some serious questions that will require your utmost attention and critical thinking skills. Good luck.