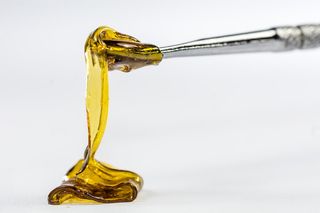 A striking proportion of teens are using highly potent forms of marijuana known as marijuana concentrates, at least in one state, a new study suggests.

As more states legalize marijuana, the sale and marketing  of marijuana concentrates has skyrocketed. But few studies have examined how common the use of these products is, particularly among teens.

"It was surprising to find that so many teens had used" marijuana concentrates, study lead author Madeline Meier, an assistant professor of psychology at Arizona State University, told Live Science.

The high rates of marijuana-concentrate use in teens are concerning, Meier said, because some evidence in adults suggests that using products with high-THC concentrations may increase a person's risk of psychosis, cognitive impairment and marijuana dependence .

What's more, people who are inexperienced users of marijuana concentrates, or who don't use them often — which likely comprises the majority of teen users — may be more likely to experience harmful side effects, such as loss of consciousness or burn injuries, the authors said. (Some types of marijuana concentrates are produced using flammable solvents, such as butane.)

It's important to note that the new study only included teens in Arizona, and the percentage of teens who use marijuana concentrates in other states is unknown. More studies will be needed to understand if the trend is confined to Arizona, or whether it's happening in other states as well.

The usage rates could be similar in other states that have legalized medical cannabis, as Arizona has, Meier said. However, some states have legalized medical cannabis but not marijuana concentrates, so their use might be lower in those ones, she added. It's also unclear whether states that allow recreational marijuana in addition to medical marijuana have higher rates of teen marijuana-concentrate use.

A yearly national survey known as Monitoring the Future, which looks at drug use among teens across the U.S., has also examined rates of marijuana-concentrate use to some extent. However, that survey classifies "concentrated THC" as a hallucinogen, and so only teens who report the use of hallucinogens are asked about use of concentrated THC. As a result, this type of questioning tends to underestimate use, Meier said. In 2018, the Monitoring the Future survey found that just 1.1% of 12th graders reported use of concentrated THC.

The findings come on the heels of a Centers for Disease Control and Prevention investigation of nearly 200 cases of lung disease tied to vaping. So far, investigators haven’t found a single cause for the illnesses, and do not know if all of them are related.

However, some doctors have hypothesized that the cases could be caused by a contaminant found in certain formulations of marijuana products sold for vaping, Live Science previously reported. Indeed, earlier this year, researchers described an 18-year-old who developed a lung injury after using butane hash oil daily for three years. That case report was published in the journal Respiratory Medicine Case Reports.

Meier stressed that the link between vaping and lung problems still needs to be investigated. However, some marijuana concentrates may have residual, or left over, solvents, such as butane, which can be toxic, she noted.

Further research is needed to examine if teens who use marijuana concentrates are indeed at higher risk of substance use problems and marjiuana addiction.

In addition, "as findings emerge showing high rates of concentrate use in adolescents, and increased cannabis-related risks associated with the use of high-THC cannabis, policy makers might consider putting a limit on THC concentration in cannabis," the authors concluded.