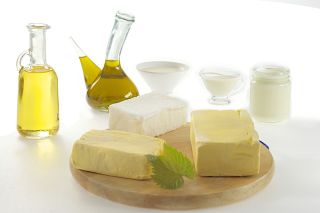 Oils and milk products are among the foods that contain fat.
(Image: © JPC_PROD | Shutterstock )

Though it gets a bad rap, fat is an important nutrient that the body needs in order to function. Eating the right amount — and the right form — of dietary fat is key to maintaining good health, experts say. However, consuming too much fat or too little may cause health problems.

The primary function of fat is as an energy reserve, according to Iowa State University. The body stores fat, or adipose tissue, as a result of excess calorie consumption. During exercise, the body first uses calories from carbohydrates for energy. After about 20 minutes, it uses calories from stored fat to keep going, according to the National Institutes of Health (NIH).

“Fat plays a role in the diet and shouldn’t be avoided,” said White. “Your body needs healthy sources of fat, also known as essential fatty acids, because the body can’t produce these fatty acids naturally." Essential fatty acids contribute to brain development, blood clotting and aid in inflammatory control, according to the NIH.

There are several types of fat — some good, some bad, some well understood and some less so. Saturated fats and trans fats are commonly considered unhealthy, while unsaturated fats — including monounsaturated and polyunsaturated fat — are considered healthy. All foods that contain fats have a mix of fat types, according to the Harvard School of Public Health.

Saturated fats are saturated with hydrogen molecules. According to White, saturated fat comes from animal sources, such as red meats, poultry and full-or-reduced fat dairy products.

According to Jimenez, trans fats are sometimes found naturally in meats or dairy, but usually in small amounts. More often, she said, they are “produced by the food industry for the purpose to increase shelf life of the product.” This is done by adding hydrogen to liquid vegetable oils to make the oils more solid. These are called partially hydrogenated oils. Jimenez said that they are often found in “convenient foods” like frozen pizzas. Other common sources of trans fats include baked goods, crackers, refrigerated dough, margarine and coffee creamer. Fast food restaurants often use them in deep fryers because partially hydrogenated oil does not have to be changed as often as regular oil.

“Trans fats are not recommended at all because of the link to heart diseases,” warned Jimenez. In fact, they are often considered the worst type of fat. According to the AHA, they both lower your good cholesterol and increase your bad cholesterol. In 2013, the FDA decreed that partially hydrogenated oils were no longer considered safe. There is currently a three-year adjustment period in place so that food manufacturers can change their practices or seek approval. In the meantime, the Mayo Clinic recommends checking labels and looking for the words “partially hydrogenated.”

Triglycerides are a potentially dangerous type of fat found in blood, according to the NIH. They are associated with coronary artery disease, especially in women.

The body converts any calories it doesn't need to use right away into triglycerides, which are stored in the fat cells. They are supposed to provide energy between meals, according to the Mayo Clinic. If you eat more calories than you expend, however, the body does not burn triglycerides, and they accumulate. Most types of fat we eat become triglycerides.

A blood test can reveal your triglyceride levels.

These fats get their name because they are not saturated with hydrogen molecules and because they have a single carbon bond in the fat molecule (called a double bond). “They are liquid at room temperature. Examples are canola, peanut or olive oil,” said Jimenez. Olives and avocadoes also contain monounsaturated fats, White added.

“[Monounsaturated fats] are known to have a heart-protective role,” said Jimenez. White noted that they have been linked to improved cholesterol levels, and the Mayo Clinic adds that they may help insulin levels and blood sugar control.

It is still important to watch your intake of monounsaturated fats because of their high caloric content, said Jimenez. Though there are no specific guidelines on how many monounsaturated fats to consume, the Mayo Clinic suggests that most of your total fat intake should come from healthy fats.

Like monounsaturated fats, polyunsaturated fats are not saturated with hydrogen molecules. They get their name from having more than one carbon bond (double bond) in the fat molecule, according to the AHA. They are liquid at room temperature.

“[Polyunsatured fats] have been shown to impact blood cholesterol levels leading to a decreased risk of cardiovascular disease,” said White. They also help with cell development and maintenance and add vitamin E to your diet.

Polyunsatured fats provide essential fatty acids, including omega-6 and omega-3, according to White.

Though there are no specific guidelines on how many polyunsaturated fats to consume, the Mayo Clinic suggests that most of your total fat intake should come from healthy fats.

Jimenez added that they are also important anti-inflammatories. On a cellular level, omega-3 fatty acids work like aspirin to inhibit an enzyme that produces hormones that trigger inflammation.

She recommended eating cold-water fish like salmon, herring, tuna and mackerel, as well as walnuts, olive oil and canola oil. Some people take fish oil to up their omega-3 intake.

There are no standard recommendations for the amount of omega-3s you need every day. The American Heart Association recommends eating 3.5 ounces of fish at least twice a week to get a good amount of omega-3s. No one should consume more than 3 grams of omega-3s from supplements without consulting a doctor, as it may cause bleeding.

In excessive amounts, some types of healthy-omega-6 fatty acids may cause the body to produce inflammatory chemicals, according to theUniversity of Maryland Medical Center. This is important to note because in general, Americans get far more omega-6 fatty acids than necessary and far too few omega-3s. The American Heart Association recommends that between 5 and 10 percent of calories come from omega-6 fatty acids.

White said that the average adult should get 20 to 35 percent of their calories from healthy fat sources. An adult eating a 2,000-calorie-a-day diet could eat 44 to 78 grams of fat in a day. Some healthy fat sources include olive oil, avocadoes, salmon, tuna, walnuts, flax seeds and sunflower seeds, said White.

“If you eliminate fat too much, it can have serious health consequences," said Jennifer Fitzgibbon, a registered oncology dietitian at Stony Brook Hospital Cancer Center in New York. "Mental health deficits like depression and vitamin deficiencies can occur. The vitamins A, D, E and K are fat soluble, meaning the body stores them in fatty tissue and the liver. The intestines need dietary fat to properly absorb these nutrients. These vitamins are also necessary for the health of your skin, bones and cardiovascular system, among other organs and systems.”

“It isn’t very common for someone to be deficient in fat in their diet, most people are guilty of having too much fat in their diet. Anything over an average amount is too much,” said White.

If you eat too much fat, you will likely gain weight, which is linked to health problems. Research on fat is ongoing, but some studies suggest that excess fat may play a role in heart disease, cancer and type 2 diabetes, according to the Mayo Clinic. Eating too much fat is also linked to high cholesterol.

Every five years, the U.S. Department of Agriculture (USDA) and the U.S. Department of Health and Human Services (HHS) create a committee to update the official U.S. Dietary Guidelines. The most current version available is from 2010. That version advises that 20 to 35 percent of calories come from fat. In 2015, however, the Dietary Guidelines Advisory Committee (DGAC) issued a recommendation to remove restrictions on fat consumption.

There is a growing body of evidence that emphasizes getting healthy fats and avoiding unhealthy ones rather than cutting fats altogether, according to the Mayo Clinic. White advises not to cut all dietary fat, but to keep track of it. “Focus on consuming healthy fat sources instead of unhealthy fat to help toward weight-loss goals,” he said.

Furthermore, low-fat diets often lead to people eating highly processed foods that are high in refined sugar and carbohydrates but low in fat. Rather than specifying how much fat to consume, the DGAC advised eating more vegetables and limiting sugar.

As of this writing, the 2015 Dietary Guidelines had not been published so it is unknown if the USDA and HHS took the recommendation.