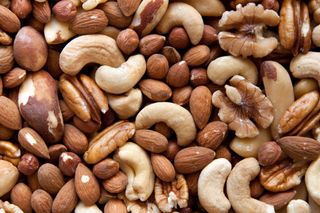 Nuts such as almonds, peanuts and hazelnuts are good sources of vitamin E.
(Image: © raliand | Shutterstock)

Vitamin E is a vital nutrient for good health, and it's found in a wide variety of foods and supplements. The best way to consume this vitamin is through a healthy diet. Deficiency is rare, and overdosing by using supplements is a concern. Those who have certain health conditions or take certain medicines should be cautious with supplements.

Vitamin E is a family of fat-soluble compounds. "It occurs naturally in eight different forms, including four tocopherols (alpha, beta, gamma and delta) and four tocotrienols. Alpha tocopherol is the most common and most potent form of the vitamin," said Elizabeth Somer, registered dietitian and author of "The Essential Guide to Vitamins and Minerals" (HarperTorch, 1993).

Good dietary sources of vitamin E include nuts, such as almonds, peanuts and hazelnuts, and vegetable oils, such as sunflower, wheat germ, safflower, corn and soybean oils, according to the U.S. National Library of Medicine (NLM). Sunflower seeds and green, leafy vegetables such as spinach and broccoli also contain vitamin E.

How much vitamin E do you need?

The recommended dietary allowance (RDA) for vitamin E is 15 milligrams (or 22.4 International Units, or IU) for people over age 14, according to the National Institutes of Health (NIH). Women who are breastfeeding may need a little more vitamin E, so the RDA for lactating women is 19 mg (28.4 IU). Doses below 1,000 mg (1,500 IU) seem to be safe for most adults.

Most people are able to get enough vitamin E from a healthy diet and do not need supplements. Always consult with a doctor before taking any supplement, especially if you are taking medications. More than 250 medications are known to interact with vitamin E, according to Drugs.com.

A vitamin E deficiency is very rare, though some people are more prone to a vitamin E deficiency than others, according to NIH. Infants, people with fat malabsorption and abetalipoproteinemia (a condition that prevents the body from completely absorbing certain dietary fats) are more likely to have vitamin E deficiency. Anemia, skeletal myopathy, ataxia, peripheral neuropathy, retinopathy, impairment of the immune response and nerve damage are signs that there may be a deficiency.

Including sources of vitamin E in your diet brings many benefits.

As a fat-soluble nutrient, vitamin E functions mainly as an antioxidant, which means it helps protect cells from damage caused by unstable molecules called free radicals.

"It protects cells from damage, and it might aid in lowering [the risk of] a variety of health problems, from heart disease to cancer, and possibly even dementia," Somer told Live Science.

In addition to providing cell protection, vitamin E is vital to a functioning immune system. As a powerful antioxidant, it helps cells fight off infection.

This vitamin also helps protect eyesight. A 2015 study by the Department of Epidemiology and Health Statistics of the Qingdao University Medical College found that vitamin E intake and high serum-tocopherol levels were linked to a decreased risk of age-related cataracts.

Vitamin E plays an important role in the production of hormone-like substances called prostaglandins, which are responsible for regulating a variety of body processes, such as blood pressure and muscle contraction. Also, a 2015 study published by the U.S. National Library of Medicine found that vitamin E aids in muscle repair after exercise, said Somer.

People with Crohn's disease, cystic fibrosis or an inability to secrete bile from the liver into the digestive tract may need to take water-soluble, supplementalforms of vitamin E to avoid digestive problems, according to the NIH.

Some people may be sensitive to vitamin E supplements, according to the Mayo Clinic. Consuming vitamin E in a supplement can cause diarrhea, nausea, stomach cramps, weakness, tiredness, headaches, rashes and other problems.

As a fat-soluble vitamin, vitamin E is stored in the body, and excess is not washed out through the urinary tract, as does happen with water-soluble vitamins, according to Georgia Highlands College. This trait means that vitamin E can accumulate to toxic levels over time, so it's possible to overdose on this vitamin.

Too much supplemental vitamin E can cause excessive bleeding and many other symptoms, including fatigue, nausea, blurred vision and gonadal dysfunction, according to the Mayo Clinic. The vitamin is also a mild blood thinner, so high doses are discouraged prior to surgery, advised Somer.

Furthermore, a 2005 study by a team of researchers at The Johns Hopkins Medical Institutions attempted to demonstrate that vitamin E supplements could help treat cardiovascular disease and cancer. Instead, the team found that taking high doses of vitamin E increased the mortality rate during the study period for cardiovascular disease and cancer patients. The researchers concluded that large doses of vitamin E should be avoided. They published their results in the journal Annals of Internal Medicine.

Similarly, a study by researchers found that people who took antioxidant supplements, including vitamin E, had a slightly increased risk of mortality during the study period. The results from that study were published in 2007 in the Journal of the American Medical Association and were focused on 68 randomized controlled trials that followed 232,606 participants for an average of 3.3 years.