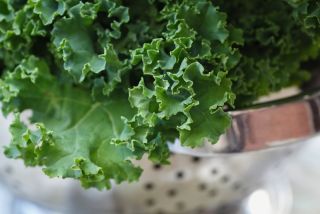 Kale is rich in vitamins, minerals and other important nutrients.
(Image: © Kale photo via Shutterstock)

Kale is a leafy green that appears on many lists of trendy superfoods, and probably with good reason. Kale is highly nutritious, containing high levels of vitamins, minerals, and brain-boosting phytonutrients.

Kale is a member of the cruciferous vegetable family, which also includes broccoli, Brussels sprouts, arugula and collard greens. Kale is easy to grow and generally inexpensive. It’s one of the simplest crops for local farmers to grow, thriving in small plots of land and personal gardens, according to the National Kale Day website.

Tina Paymaster, a certified health and lifestyle coach and an "ambassador" for National Kale Day, listed heart health, detoxing, bone health, skin health and cancer and diabetes prevention as among kale’s many benefits.

Paymaster continued, “Kale’s also a great source of calcium, magnesium, iron and antioxidants.” An article in Today’s Dietitian pointed out that kale’s calcium and iron are highly digestible, because, unlike many other leafy vegetables, including spinach, it has a very low oxalate content.

Oxalate is a naturally occurring substance found in food, according to the Mayo Clinic. High oxalate levels can increase the concentration of calcium or oxalate in urine, causing kidney stones to form.

Here are the nutrition facts for kale, according to the U.S. Food and Drug Administration, which regulates food labeling through the Nutritional Labeling and Education Act:

“Kale has a good balance of omega-3 and omega-6 fatty acids, necessary for heart health,” said Paymaster. Studies have linked omega-6 fatty acids to a decreased risk of heart disease. One aggregate study published in the American Heart Association’s journal Circulation found that “the consumption of at least 5 percent to 10 percent of energy from omega-6 PUFAs reduces the risk of CHD [coronary heart disease] relative to lower intakes.”

Kale is also a good source of potassium, with about 8 percent of the recommended daily intake per cup but significantly fewer calories than most high-potassium foods, such as bananas. Potassium is an essential part of heart health, according to the American Heart Association. Many studies have linked it with lower blood pressure because it promotes vasodiliation, according to Today’s Dietitian. One study of 12,000 adults, published in Archives of Internal Medicine, showed that those who consumed 4,069 milligrams of potassium each day lowered their risk of cardiovascular disease and ischemic heart disease by 37 percent and 49 percent, respectively, compared to those who took 1,793 mg per day.

Paymaster also pointed out that vitamin K is associated with heart health and blood clotting. According to the Linus Pauling Institute of Oregon State University, vitamin K is an essential factor in blood clotting and lack of it can cause hemorrhages. There are also suggestions that vitamin K might reduce the risk of heart disease because without it, mechanisms that stop the formation of blood vessel calcification might become inactive. Studies are still inconclusive, however, and one review of them, published in the journal Advances in Nutrition, suggested that future research focuses specifically on vitamin-K deficient patients.

With one cup of cooked kale containing 10 percent of daily fiber needs, this leafy green can be helpful for those managing diabetes. A meta-analysis of studies of the relationship between fiber and blood glucose levels published in The Journal of the American Board of Family Medicine found that increased fiber intake can reduce blood glucose levels during the standard fasting blood glucose test (a test of blood sugar levels after an overnight fast). The article showed that HbA1c levels also decreased with increased fiber. HbA1c refers to glycated haemoglobin, when proteins in the blood mix with blood sugar, and is associated with increased risk of diabetes complications.

According to Paymaster, kale’s sulfur content can also help with diabetes. “Kale is rich in sulfur, which is important for detoxification and is necessary for the production of glutathione, one of the most important antioxidants in your body," she said. "Sulfur is also extremely important for glucose metabolism, helping to decrease the weight gain and the risk of diabetes.” A study published in the Journal of Chromatology B found that kale contained more glucoraphanin, the precursor to sulfur, than broccoli.

With just 33 calories per cup, kale is a popular diet food. “It can help in weight loss and weight management because fiber helps to keep you fuller longer,” said Paymaster. She added that kale’s magnesium content could also be helpful in this regard. “Magnesium is one of the minerals that most people are deficient in, but is extremely important for helping the body manage stress and maintain optimal digestion.”

Paymaster noted kale’s potential cancer-prevention benefits. These have been a popular topic of study in the nutritional scientific community, according to an article published in journal of Cancer Prevention Research. Kale contains especially high levels of cancer-prevatative properties called glucosinolate phytonutrients. Its sulfur content can also be helpful in this regard. It may help protect against tumor development as well as act as a block enzymes associated with cancer, according to an article in Cancer Letters journal.

According to the National Cancer Institute, compounds in cruciferous vegetables have been found to inhibit the development of cancer in rats and mice.

According to World’s Healthiest Foods, research suggests that kale is likely most helpful in protecting against bladder, breast, colon, ovary and prostate cancers. One animal study published in Carcinogenics journal showed that allyl isothiocyanate, a glucosinolate that kale has in large quantities, inhibited the proliferation of bladder cancer cells and was considered a “multi-targeted agent against bladder cancer.”  Another study published in Molecular cancer journal found that that sulphorophane glucosinolate stopped growth in epithelial ovarian cancer cells.

Paymaster added that kale’s antioxidants may also be helpful in cancer prevention: “Antioxidants are incredibly important to help remove free radicals from the body that can lead to accelerated aging as well as serious diseases such as cancer.” Kale is an especially good source of the anti-oxidants lutein, beta-carotene, kaempferol and quercitin, all associated with possible cancer benefits.

According to World’s Healthiest Foods, kale has at least 45 different flavonoids, which may reduce the risk of stroke.

Kale contains 7 percent of daily iron needs. “Iron helps in the formation of hemoglobin, which is the main carrier of oxygen to cells of the body and is also important for muscle and brain health,” explained Paymaster. She added that kale’s omega-3 fatty acids are also good for brain health. According to the University of Maryland Medical Center, omega-3 fatty acids are important for brain memory, performance, and behavioral function.

Sulphorophane, like kale’s other antioxidants, has anti-inflammatory properties that, according to an article in Neuroscience Letters, may help cognitive function, especially after brain injury.

Paymaster noted another benefit to kale’s high fiber content. “Fiber is essential for cleansing and and detoxifying the body as well as helping to lower cholesterol,” she said. Fiber may help lower cholesterol levels because it picks up excess cholesterol compounds in your gut and pushes them out in the elimination process.

While kale may help cholesterol levels whether it’s raw or cooked, new research shows that steaming it can give you the greatest benefit. A study published in Nutrition Research found that the fiber in steamed kale binds better to bile in the digestive tract, which results in more cholesterol being removed.

The National Osteoporosis Foundation listed kale as one of their “good-for-your-bones foods” because of its calcium content. “Calcium aids in bone loss prevention, as well as maintaining a healthy metabolism and alkaline environment in your body,” explained Paymaster. In fact, one cup of cooked kale has about the same amount of calcium as one cup of cow’s milk, according to an article published in The American Journal of Clinical Nutrition.

"For those looking for a natural way to get clearer skin, sulfur helps in removing toxins from the skin, collagen production and scar reduction,” said Paymaster. Kale’s vitamin C and vitamin A content is also good for skin. According to the Linus Pauling Institute at Oregon State University, vitamin C is necessary for collagen production, which keeps skin looking youthful and aids in wound healing, and vitamin A is a compound in retinoids, which are popular in anti-aging skin treatments.

According to an article in the Journal of the American Academy of Dermatology, iron deficiencies can cause hair loss. Though iron supplements should not be taken unless patients have anemia, natural sources of iron, like kale, may help maintain hair.

As good as kale is for you, you shouldn’t eat it in excess. Eating copious amounts of leafy greens can cause bloating, gas and constipation, according to The Washington Post. Additionally, people taking blood thinners should watch out because kale’s high vitamin K content promotes clotting.

Because kale also contains oxalates, which are sometimes associated with kidney stones and gallstones, World’s Healthiest Foods recommends chewing well and relaxing between meals to minimize any problems with oxalates.

In January of 2014, The New York Times published an opinion piece discussing possible connections between kale and other cruciferous vegetables and thyroid problems. Since then, kale has come under suspicion for being goitrogenic (a substance that could cause swelling or dysfunction of the thyroid gland). Recent studies, however, have shown that kale and its cruciferous cousins do not interfere with thyroid functioning in healthy people, according to World’s Healthiest Foods. Even those with hypothyroidism can eat as much kale as they want if it is cooked, according to an article in The Permanente Journal.

A real risk with kale is pesticide consumption. In 2014 and 2015, the Environmental Working Group listed kale on its Dirty Dozen Plus list of most contaminated foods. This means that you should buy organic kale if possible, and be sure to wash what you do buy thoroughly.

Paymaster provided with some suggestions for preparing kale:

“There are many ways to incorporate kale into your diet. You can blend it into smoothies, soups or sauces, sauté it with other vegetables in a stir-fry, massage it with a bit of olive oil and sea salt for the base of a green salad, bake it into frittatas, lasagnas or burgers and, of course, make kale chips!" she said. "You can use kale the same way you would use any other green. To make it easier, look at what you already cook and figure out how you can incorporate kale into those recipes. Get creative and have fun with it!”