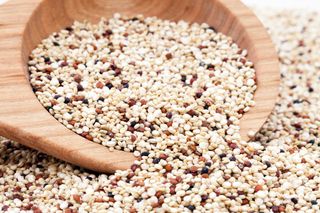 Quinoa, often described as a "superfood" or a "supergrain," has become popular among the health conscious, with good reason. Quinoa (pronounced KEEN-wah or ke-NO-ah) is packed with protein, fiber and various vitamins and minerals. It is also gluten-free and is recommended for people who are on a gluten-free diet.

Often used as a substitute for rice, quinoa is commonly considered to be a grain and is usually referred to as such, but it is actually a seed. "The yellowish pods are the seed of a plant called Chenopodium quinoa, native to Peru and related to beets, chard and spinach," wrote Nicole Spiridakis in a story for NPR. When cooked, quinoa is soft and fluffy, with a slightly nutty taste. It can also be made into flour, flakes and various foods like pasta and bread, according to the Grains and Legumes Nutrition Council.

Quinoa comes from Peru, Bolivia and Chile. It grows in the Andes Mountains, and for millennia it has been a food staple for the native people there. According to a field crops article by the University of Wisconsin and the University of Minnesota, quinoa means "mother grain" in the Incan language.

Recently, the surge in quinoa demand has pushed production beyond South America to more than 70 countries, according to the Food and Agriculture Organization of the United Nations. Today, large-scale quinoa crops grow in China, North America, France and India. Quinoa production is picking up in Africa and the Middle East, according to a 2016 assessment in Frontiers in Plant Science.

According to Spiridakis, there are 1,800 types of quinoa. Quinoa seeds can be black, red, white, purple, pink, yellow, gray, orange, green or yellow. In the United States, white (traditional) and red (Incan) quinoa are commonly available. While the white variety is more flavorful, the red contains more nutrients.

A 2009 article in the Journal of the Science of Food and Agriculture stated that quinoa's "unusual composition and exceptional balance" of protein, oil and fat, as well as its minerals, fatty acids, antioxidants and vitamins, make it a highly nutritious food. The article also noted that phytohormones are found in quinoa, unlike many other plant foods. Phytohormones help regulate plant growth. Some types, called phytoestrogens, are being studied as a treatment for menopause symptoms because they sometimes behave like estrogens in the body.

A 2017 study in the Journal of Nutraceuticals and Food Science determined that compared to other cereals, which people around the world rely upon for macronutrients, quinoa has more protein and a greater balance of essential amino acids. Nutritionally, it resembles milk protein more than cereals like wheat, corn and barley. It also surpasses cereals in amounts of dietary fiber, lipids, calcium, iron, zinc, phosphorus and vitamins B1, B2, B6, C and E.

Here are the nutrition facts for quinoa, according to the U.S. Food and Drug Administration, which regulates food labeling through the Nutrition Labeling and Education Act:

"Quinoa is most famous for being one of the only plant foods that supplies complete proteins, offering all essential amino acids in a healthy balance," Toups told Live Science. Essential amino acids are ones that the body cannot produce on its own, and complete proteins contain all of them in roughly equal measure. There are nine essential amino acids, listed by the National Institutes of Health as the following: histidine, isoleucine, leucine, lysine, methionine, phenylalanine, threonine, tryptophan and valine. Unlike other grains, quinoa is a particularly good source of lysine, according to the Ohio Agricultural Research and Development Center. Quinoa and other whole grains also contain 25 percent more protein than refined grains, according to Toups.

Quinoa and other whole grains may help decrease the risk of this dangerous inflammation, according to Toups. They "help promote healthy gut microbes (the friendly bacteria in the gut), which is important for preventing obesity, inflammation and disease." World’s Healthiest Foods notes that quinoa is known to contain many anti-inflammatory nutrients, including phenolic acids, cell wall polysaccharides and vitamin E family nutrients such as gamma-tocopherol.

People who follow gluten-free diets can have a hard time getting all of their essential nutrients. The Mayo Clinic lists iron, calcium, fiber, thiamin, riboflavin, niacin and folate as nutrients especially lacking in gluten-free diets.

"Because quinoa is naturally gluten-free, this nutritionally dense grain is the perfect pick for gluten-free diets," said Toups. She pointed to a study published in the Journal of Human Nutrition and Dietetics in which researchers at Columbia University's Celiac Disease Center found that "the nutritional profile of gluten-free diets was improved by adding oats or quinoa to meals and snacks. Most notable increases were protein (20.6 grams vs. 11 g) iron (18.4 milligrams vs. 1.4 mg, calcium (182 mg vs. 0 mg) and fiber (12.7 g vs. 5 g)."

"Similarly," continued Toups, "in a study in Food Chemistry, researchers suggest that adding quinoa or buckwheat to gluten-free products significantly increases their polyphenol content, as compared to typical gluten-free products made with rice, corn and potato flour. Products made with quinoa or buckwheat contained more antioxidants compared with both wheat products and the control gluten-free products." Polyphenols are chemicals that protect cells and body chemicals against damage caused by free radicals, which are reactive atoms that contribute to tissue damage in the body.

Quinoa's good fiber content can aid in lowering cholesterol levels, according to Toups. Fiber aids in digestion, which requires bile acids, which are made partly with cholesterol. As your digestion improves, the liver pulls cholesterol from the blood to create more bile acid, thereby reducing the amount of LDL, the bad cholesterol. A study published in the journal Plant Foods for Human Nutrition found that rats that had consumed a high level of fructose and were then fed a quinoa diet reduced their LDL cholesterol by 57 percent.

A 2017 study published in Current Developments in Nutrition found that overweight or obese people who ate between 25 and 50 grams of quinoa per day for 12 weeks saw significantly lowered triglyceride concentrations and a 70 percent reduction in metabolic syndrome prevalence.

Toups pointed to a study in the American Journal of Clinical Nutrition that looked at the effect of whole grains on patients taking cholesterol-lowering medications called statins. Those who ate more than 16 g of whole grains like quinoa every day had lower non-HDL cholesterol levels than those who took the statins without eating the whole grains. "Whole-grain intake and statin use were also significantly linked with healthier total cholesterol/HDL-cholesterol ratios and total cholesterol concentrations," she added.

Lowering LDL cholesterol is good for your heart, but quinoa can benefit your ticker in other ways as well. A study published in the Journal of Food Lipids noted that quinoa seeds possess many of the dietary flavonoids "shown to inversely correlate with mortality from heart disease."

Furthermore, quinoa can provide heart-healthy monounsaturated fat via its oleic acid content, as well as omega-3 fatty acids and alpha-linolenic acids, according to World's Healthiest Foods. Most foods lose their healthy fatty acids when oxidized, but quinoa's nutrients hold up to boiling, simmering and steaming.

Toups referred to a study in the European Journal of Nutrition that found other evidence for quinoa's cardiovascular benefits. In this study, she said, "Italian researchers found that quinoa produced lower free fatty-acid levels and triglyceride concentrations (which are associated with a reduced risk of heart disease) than other gluten-free pastas and breads studied."

One cup of cooked quinoa contains 21 percent of the recommended daily intake of fiber, which is great news for your gut. Quinoa is also more easily digestible than many other grains, according to World's Healthiest Foods. Furthermore, a study in the British Journal of Nutrition found that participants reported feeling fuller after eating quinoa, buckwheat or oats than after eating wheat or rice.

"Quinoa has also been studied for its role in diabetes management and hypertension," said Toups. Commenting on a study published in the Journal of Medicinal Food, she said, "Brazilian scientists researched 10 traditional Peruvian grains and legumes for their potential in managing the early stages of Type 2 diabetes. They found that quinoa was especially rich in an antioxidant called quercetin and that quinoa had the highest overall antioxidant activity (86 percent) of all 10 foods studied." She added that the study led researchers to conclude that quinoa, kañiwa (quinoa's cousin) and other traditional crops from the Peruvian Andes have potential in helping researchers to develop effective dietary strategies for managing Type 2 diabetes and associated hypertension.

According to some scientists, the fiber in quinoa could actually help people live longer. A meta-analysis of relevant studies published in the American Journal of Epidemiologyconcluded, "high dietary fiber intake may reduce the risk of total mortality."

There are a few health risks associated with eating quinoa. Quinoa seeds are coated with saponins, which are chemicals designed to protect plants from diseases caused by fungi, bacteria and viruses, according to the Environmental Protection Agency. Saponins can have a bitter, soapy taste, so quinoa should be rinsed thoroughly in cold water before it is cooked.

For some, saponins can do more than leave a bad taste in the mouth: They can cause stomach irritation and, according to the horticultural department at Purdue University, possibly damage the small intestine. The high fiber content in quinoa may also result in upset stomachs, according to Livestrong.com.

Quinoa in the diet

Quinoa cooks faster than most whole grains, taking only 12 to 15 minutes, according to Toups. This makes quinoa "an easy grain for busy families and individuals to add to their weekly rotation," she said. Furthermore, "Unlike some grains that tend to dry out when cooled, quinoa maintains a pleasant, chewy texture when served warm, chilled or at room temperature."

This all means that quinoa can be incorporated into your diet in a variety of ways, from being prepared as a breakfast porridge to being an addition to salads or prepared like a pilaf. "Quinoa can also be used to thicken up soups or stews, and quinoa flour can be used in gluten-free baking," said Toups.

Quinoa's popularity has grown rapidly in recent years. From 2011 to 2015, quinoa prices jumped 202 percent, according to The Straits Times. Exported Peruvian quinoa tripled in value between 2012 and 2017, from $34.5 million to $124 million. This demand surge has caused unforeseen consequences for the environment. Typically, farmers rotate crops, but growing quinoa year after year can result in soil erosion, water depletion and land degradation, according to The World Policy Institute.

Extreme weather can cause problems for large-scale quinoa production. In 2017, El Nino ravaged Peruvian farms, destroying quinoa and other crops. As a result, researchers as Peru's National University of Altiplano have developed new strains of quinoa that are resistant to harsh weather, drought and plague, according to Peru Reports. These new developments will be increasingly important as climate change impacts quinoa-growing regions, such as the Bolivian highlands, which have suffered severe droughts that decimated once-valuable quinoa crops, according to Inside Climate News.

According to the Food and Agriculture Organization of the United Nations, however, quinoa is relatively stable compared to some other mass-produced crops and therefore could be instrumental to feeding the world as the effects of climate change escalate. Quinoa is adaptable, able to grow in regions with 40 percent to 88 percent humidity and temperatures from 25 to 100 degrees Fahrenheit (minus 4 to 38 degrees Celsius), according to a 2017 review in the Journal of Pharmacognosy and Phytochemistry. The review's authors posit that quinoa's adaptiveness may help curb mass hunger, particularly in the world's most populous country, India.