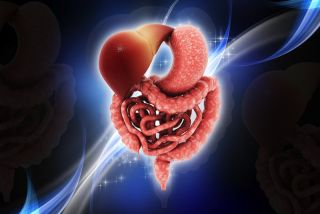 Celiac disease is an autoimmune digestive disease that affects at least 1 in 133 Americans, roughly 1 percent of the population, according to the National Foundation for Celiac Awareness. Celiac disease is also called celiac sprue or gluten-sensitive enteropathy. The word "celiac," sometimes spelled "coeliac" or "cœliac" is derived from the Greek koiliakós, abdomen.

“Celiac disease is a gastrointestinal condition. It's a poor immune response to foods that contain gluten, a protein found in grains,” said Dr. Bethany DeVito, a gastroenterologist at North Shore University Hospital in Manhasset, New York.

Gluten is found in foods made from grains such as wheat, rye and barley. Oats may contain gluten too if they are cross-contaminated with grains during manufacturing, DeVito said.

In people with celiac disease, exposure to gluten damages the lining of the small intestine, interfering with the absorption of nutrients from food and often causing abdominal pain.

In the past few years, awareness of the genetic disorder has increased and many food companies and restaurants now offer menus that cater to those with celiac disease.

Classic symptoms of celiac disease are diarrhea and weight loss. However, many people may not experience digestive symptoms, according to the Mayo Clinic. There are also symptoms that may appear later if someone is untreated, for example, nutrient deficiencies.

“Some people have anemia and vitamin deficiencies because of mal-absorption. They don't absorb all the nutrients because of the damage in the small bowel,” DeVito said.

Some of the symptoms of celiac disease include:

It is not fully understood what causes celiac disease, DeVito said. “It seems that most people with celiac disease have a genetic predisposition to the condition,” she said.

Studies show that men and women of any age and race can be affected by celiac disease, but is more prevalent in those of Northern European descent. People who have a family member with celiac disease are more likely to have the disease.

There are two main genes related to celiac disease. Ninety-five percent of people with celiac disease will have the HLA-DQ2 gene, and the other 5 percent have the HLA-DQ8 gene. Although genetic testing is possible, it is extensive, and may have confusing results, DeVito said. Having the gene doesn’t means that will develop the disease.

When a person with celiac disease consumes gluten, the immune system overreacts and targets the body’s small intestine. The villi — hair-like structures in the small intestine — suffer shortening and flattening. This occurs in the lamina propria and crypt regions of the intestine when the patient eats specific food-grain antigens, or toxic amino acid sequences. These toxic amino acid sequences are found in wheat, rye and barley.

Because there is such a wide variation of symptoms, diagnosis can be difficult and it may take several years for someone to get diagnosed.

But a diagnosis can be made using a blood test that looks for specific antibodies that people with celiac disease have, DeVito said. These antibodies are signs of an immune reaction to gluten.

“If the symptoms point to celiac disease I send the patients for blood test for antibodies,” she said.

The blood test can show whether a patient has celiac disease or suffers from other diseases like irritable bowel syndrome and Crohn’s disease, which have similar symptoms. Currently, doctors test for total IgA, IgA-tTG, IgA-EMA, and possibly IgG/IgA-DGP or IgG-AGA.

It’s important that the patient continue to consume gluten before the blood tests, so that the test can measure the immune system’s response to that diet, DeVito said.

If the blood test is positive, the doctors may then do an upper endoscopy to view and biopsy the small bowel. Upper endoscopy involves inserting a flexible tube with a camera into the patient’s mouth and advancing through stomach and into the small bowel. Doctors would take pieces of tissue from the small bowel so that a pathologist can examine the tissue under the microscope to see if there are any abnormalities, DeVito said.

People diagnosed with celiac disease will have to strictly avoid gluten in their diet.

“The only treatment for celiac disease is a strict gluten-free diet,” DeVito said.

Even the smallest amount of gluten can trigger damage to the small intestines and reverse the healing process. Full healing in children usually takes six months, while full healing can take much longer for adults. Some people who have had symptoms for an extended period of time may take longer than two years to heal, and some will never fully recover.

Celiac disease should not be confused with gluten intolerance, DeVito said. However, some people without celiac disease may feel they are sensitive to gluten, and report they feel better after following a gluten-free diet, DeVito said.