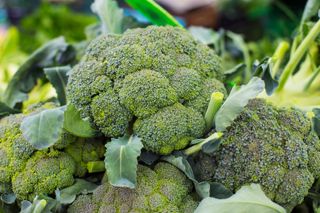 Your parents knew what was up when they told you to eat your broccoli. This verdant vegetable is a powerhouse of nutrients. It's reputed to benefit digestion, the cardiovascular system and the immune system, and to have anti-inflammatory and even cancer-preventing properties. Plus, broccoli is low in sodium and calories, at about 31 calories per serving. It's also a fat-free vegetable.

Broccoli has an impressive nutritional profile. It is "high in fiber, very high in vitamin C and has potassium, B6 and vitamin A," raved Victoria Jarzabkowski, a nutritionist with the Fitness Institute of Texas at the University of Texas at Austin. "For a nonstarchy vegetable, it has a good amount of protein."

Broccoli is also packed with phytochemicals and antioxidants. Phytochemicals are chemicals in plants that are responsible for color, smell and flavor. Research shows that they have numerous healthful benefits, according to the American Institute for Cancer Research. Phytochemicals in broccoli are good for the immune system. They include glucobrassicin; carotenoids, such as zeaxanthin and beta-carotene; and kaempferol, a flavonoid.

Antioxidants are chemicals produced by the body or found in fruits, vegetables and grains. "Antioxidants can help find and neutralize free radicals that cause cell damage," Jarzabkowski told Live Science. Free radicals are unstable molecules made during metabolism. The damage they can cause may lead to cancer, according to the National Cancer Institute.

Broccoli is a good source of lutein, a compound antioxidant, and sulforaphane, which is a very potent antioxidant," Jarzabkowski said.

Here are the nutrition facts for broccoli, according to the U.S. Food and Drug Administration, which regulates food labeling through the National Labeling and Education Act:

For obese individuals with type 2 diabetes, broccoli extract may be what the doctor ordered. Scientists reporting in the June 14, 2017 issue of the journal Science Translational Medicine, found that a compound called sulforaphane in broccoli (and other cruciferous veggies like cabbage and Brussel sprouts) could turn down the activity, or expression, of 50 genes associated with symptoms related to type 2 diabetes. The scientists gave the compound (in the form of a broccoli sprout extract) to 97 individuals with type 2 diabetes over the course of 12 weeks. Though non-obese participants didn't see any effect, the obese individuals saw their fasting blood glucose levels go down a significant 10 percent compared with a control group. The dose, however, is 100 times what is found naturally in broccoli, the researchers reported.

The same compound was also found to improve symptoms related to autism; those who took the extract containing sulforaphane showed improvements in verbal communication and social interactions, researchers reported Oct. 13, 2014 in the journal Proceedings of the National Academy of Sciences.

Probably the most publicized health benefit of broccoli is its possible ability to help prevent cancer. "Broccoli is a cruciferous vegetable, and all vegetables in this group may be protective against some stomach and intestinal cancers," Jarzabkowski said.

According to Jarzabkowski, broccoli can help lower cholesterol because the soluble fiber in the vegetable binds with the cholesterol in the blood. This binding makes the cholesterol easier to excrete, and consequently lessens cholesterol levels in the body.

Phytocheimcals glucoraphanin, gluconasturtiin and glucobrassicin compose a terrific trio in broccoli. Together, they aid all steps of the body's detoxification process, from activation to neutralization and elimination of contaminants. A study published in the journal Proceedings of the National Academy of Sciences of the United States of America found that the sprouts of broccoli may be especially potent in this regard.

In addition to reducing cholesterol, broccoli can aid in heart health by helping to keep blood vessels strong. The sulforaphane in broccoli is also an anti-inflammatory and may be able to prevent or reverse damage to blood vessel linings caused by chronic blood sugar problems. And the vegetable's B-complex vitamins can help regulate or reduce excessive homocysteine, according to the Harvard University School of Public Health. Excess homocysteine, an amino acid that builds up after a person eats red meat, increases the risk of coronary artery disease.

"You've probably heard that carrots are good for your eyes, and that's because they contain lutein," Jarzabkowski said. "It's a compound antioxidant that's really good for eye health, and broccoli is also a great way to get it." Another antioxidant in broccoli called zeaxanthin is similarly beneficial. Both chemicals may help protect against macular degeneration, an incurable condition that blurs central vision, and cataracts, a clouding of the eye's lens.

Jarzabkowski emphasized broccoli's digestive benefits, which she chalked up mostly to the vegetable's high fiber content. Broccoli has nearly 1 gram of fiber per 10 calories. Fiber helps keep you regular and helps maintain healthy bacteria levels in the intestines.

Broccoli also aids in digestion by helping to keep your stomach lining healthy. The sulforaphane in broccoli helps keep the stomach bacteria Helicobacter pylori from becoming overgrown or clinging too strongly to the stomach wall. A 2009 Johns Hopkins study on mice found that broccoli sprouts are especially good at helping in this way. Mice that were fed broccoli sprouts daily for two months reduced the levels of H. pylori in their stools by more than 40 percent.

Broccoli is a great anti-inflammatory and may slow down the damage to joints associated with osteoarthritis. A 2013 study at the University of East Anglia found that broccoli's sulforaphane may help people suffering from arthritis because this chemical "blocks the enzymes that cause joint destruction by stopping a key molecule known to cause inflammation."

Broccoli's isothiocyanates and omega-3 fatty acids also help to regulate inflammation. Furthermore, a 2010 study published in the journal Inflammation Researcher suggested that the flavonoid kaempferol lessens the impact of allergens, especially in the intestinal tract, which can reduce chronic inflammation.

In general, broccoli is safe to eat, and any side effects are not serious. The most common side effect is gas or bowel irritation, caused by broccoli's high amounts of fiber. "All cruciferous vegetables can make you gassy," Jarzabkowski said. "But the health benefits outweigh the discomfort."

According to The Ohio State University Wexner Medical Center, people taking blood-thinning medications should watch their broccoli intake, since the vegetable's vitamin K content may interfere with the medication's effectiveness. Those with hypothyroidism should also limit their intake of broccoli.

Raw, steamed or boiled: Which is more nutritious?

The way that you prepare broccoli can affect the amount of nutrients you get, and which ones. People looking to broccoli for its anticancer benefits will want to be sure not to cook the vegetable too long.

A 2007 University of Warwick study found that boiling broccoli can undermine the effects of the food's good, cancer-fighting enzymes. Researchers studied the effects of boiling, steaming, microwave cooking and stir-fry cooking on fresh broccoli, Brussels sprouts, cauliflower and green cabbage.

Boiling led to the biggest losses of cancer-fighting nutrients. Steaming for up to 20 minutes, microwaving for up to three minutes and stir-frying for up to five minutes produced no significant loss of cancer-preventive substances. Raw broccoli maintains all of its nutrients, but it is also more likely to irritate your bowels and cause gas.

If you read this article, you should be able to score well on our quiz.