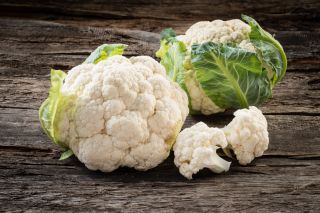 Most cauliflower is white because the large leaves covering the head blocks sunlight and prevents chlorophyll from developing.
(Image: © Tim UR | Shutterstock)

Cauliflower is much more than broccoli's paler cousin: This member of the cruciferous vegetable family is packed with a rich supply of nutrients and is finally getting the attention it deserves as a nutrition powerhouse.

With a nutty and slightly sweet taste, cauliflower has become one of the trendiest vegetables over the last few years, making its way onto restaurant menus and dinner tables in a variety of ways, especially riced versions of the vegetable.

Although vividly colored fruits and veggies tend to be the healthiest choices, Heather Mangieri, a Pittsburgh-based registered dietitian and nutritionist, health author and spokesperson for the Academy of Nutrition and Dietetics, says that cauliflower is a notable exception.

"Despite its white color, cauliflower is a very versatile and vitamin-rich vegetable," Mangieri said. "It is a great source of vitamin C and folate and a good source of fiber and vitamin K. It is also rich in phytochemicals and antioxidants, two naturally occurring compounds thought to play a role in preventing chronic diseases," she noted.

In fact, cauliflower ranks among the top 25 powerhouse fruits and vegetables in the Centers for Disease Control and Prevention’s Aggregate Nutrient Density Index (ANDI), a scoring method that ranks foods based on their nutrient content per calorie.

White florets are the primary edible portion of the vegetable, which are found in a tightly-packed head, while its green leaves and stalk are typically not eaten. Cauliflower can be cooked, eaten raw and added to soups, salads or stir-fries.

Mangieri noted that cauliflower, like many other cruciferous vegetables, can give off a strong smell while cooking. This is caused by high levels of sulfur-containing compounds called glucosinolates. Shorter cooking times can minimize the pungent aroma.

The U.S. Dietary Guidelines for Americans recommend that adults consume 1.5 to 2.5 cup-equivalents of dark green vegetables (which includes cruciferous vegetables like cauliflower) per week.

Here are the nutrition facts for cauliflower, according to the U.S. Food and Drug Administration:

The name cauliflower comes from the Latin caulis (stalk) and floris (flower), meaning "cabbage flower," according to the University of Arizona.

Cauliflower is cruciferous vegetable, a plant family that includes arugula, bok choy, broccoli, Brussels sprouts, cabbage, collard greens, kale, radishes, turnips and watercress. It has a rich supply of nutrients comparable to its green-colored relatives in the cruciferous family.

Cauliflower originated in Asia Minor (modern-day Turkey) from wild cabbage, and the plant once resembled collard greens or kale more than the white vegetable it's known as today, according to the George Mateljan Foundation's World’s Healthiest Foods website.

The vegetable gained popularity in France in the 1500s, and was subsequently cultivated in Northern Europe and Britain. Today, most cauliflower is grown in the United States, France, Italy, India and China.

When growing, cauliflower starts out resembling broccoli, according to the University of Arizona. However, while broccoli opens outward to sprout green florets, cauliflower forms a compact head, called a curd, composed of flower buds that have not developed fully. The flower buds are protected from sunlight by heavy green leaves that surround the head. This prevents chlorophyll from developing, so the head remains white rather than turning green.

The many colors of cauliflower

Although white is the vegetable's most common color, several varieties of colored cauliflower are also available, including orange, purple and green.

Purple cauliflower: The vegetable's lavender color comes from anthocyanins, which are plant pigments rich in antioxidants that are also found in red cabbage. When cooked, the florets change color from purple to green.

Green cauliflower: This cross between broccoli and cauliflower is also known as broccoflower. It has a sweeter taste than white cauliflower.

Cauliflower is not an especially well-studied vegetable on its own, according to World's Healthiest Foods. Researchers are more likely to study the health benefits of diets containing cauliflower as well as other cruciferous vegetables.

Vitamins C and K and manganese are antioxidants that can neutralize free radicals before they can cause damage to healthy cells and contribute to disease, such as heart disease and cancer. Antioxidants such as vitamins K and C may help prevent conditions such as cancer, heart disease and arthritis, Mangieri said.

Cruciferous vegetables, like cauliflower, are rich in plant-based compounds, such as sulforaphane and indoles, which scientists think may reduce the risk of developing some types of cancer. Studies of these cancer-protective compounds in animals have shown promising effects in preventing cancer, but human studies in people who ate higher amounts of cruciferous vegetables have shown mixed results of its cancer-preventive effects, according to the National Cancer Institute.

"Some research suggests that the glucosinolates found in cruciferous vegetables may help reduce risk of certain cancers, namely prostate cancer," Mangieri said. When glucosinolates in cruciferous vegetables break down, through being chopped or chewed, they produce compounds that may encourage the elimination of carcinogens from the body, according to a review published in Current Drug Metabolism.

A review published in Advances in Experimental Medicine and Biology looked at several studies that examined the link between the consumption of cruciferous vegetables and cancer risk. It found that "of the case-control studies 64 percent showed an inverse association between consumption of one or more brassica vegetables and risk of cancer at various sites."

A few studies have found that consuming higher amounts of cruciferous vegetables has been linked with a decreased risk of cardiovascular disease, compared to eating a lower intake, but results have been largely inconsistent, according to the Linus Pauling Institute of Oregon State University.

Sulforaphane is associated with strong blood vessels and a reduced risk of cardiovascular disease. A 2015 review published in Oxidative Medicine and Cellular Longevity found that sulforaphane's anti-inflammatory capabilities may help protect against hypertension, atherosclerosis, stroke and myocardial infarction.

Cauliflower has a high fiber content, and one cup of it cooked has about 10 percent of the recommended daily amount of fiber. Diets rich in fiber can help prevent constipation, and promote bulkier, softer stools that are easier to pass through the digestive system than hard ones. These beneficial effects not only make life more comfortable but also help maintain colorectal health.

The risks from eating cauliflower are generally minimal. Like other cruciferous vegetables, cauliflower can make some people feel gassy or bloated.

According to The Ohio State University Wexner Medical Center, people taking warfarin (Coumadin), a blood-thinning medication, should watch their intake of green leafy vegetables including cauliflower, since the vegetable's vitamin K content may interfere with the medication's effectiveness. It's fine to include these nutritious vegetables in your diet, but keep your intake of foods rich in vitamin K consistent from week to week, experts recommend.

Steaming and broiling are probably the most common ways to cook cauliflower, but they can leave the vegetable mushy and bland. That's why Mangieri suggests roasting, sautéing and eating it raw to retain more flavor. The shape of the florets and their mild taste make them perfect for dipping into dressings and sauces.

Here are Mangieri's suggestions for including this versatile veggie in your diet: