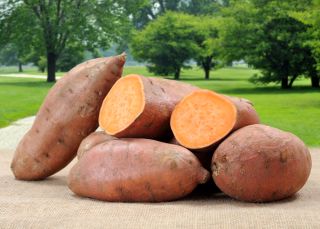 Sweet potatoes (Ipomoea batatas) truly match the description "delicious and nutritious." These tasty veggies are packed with vitamins and nutrients and are sweet to eat.

Although the orange variety is the most common in the United States, sweet potatoes also come in white, yellow, pink and purple varieties, according to the Library of Congress. While the orange and yellow types contain the most vitamin A, the purple variety contains high levels of antioxidants, the Cleveland Clinic reports.

Here are the nutrition facts for sweet potatoes, according to the U.S. Food and Drug Administration, which regulates food labeling through the National Labeling and Education Act:

Sweet potatoes are one of the best sources of vitamin A; a medium one contains more than 100 percent of the daily recommended intake, according to the USDA.

Sweet potatoes are packed with vitamins: They "are high in vitamin A [in the form of beta-carotene], vitamin B5, B6, thiamin, niacin, riboflavin, and, due to their orange color, are high in carotenoids," said San Diego-based nutritionist Laura Flores.

They also contain no fat, are relatively low in sodium and have fewer calories than white potatoes — although they do contain sugar. Sweet potatoes are also high in vitamin C, potassium and fiber, according to HSPH.

Sweet potatoes are considered a medium glycemic index food, according to HSPH, with a glycemic index of 63. (The glycemic index (GI) refers to how quickly and how much a food raises a person's blood sugar after eating.) White potatoes, on the other hand, are a high-GI food, with a GI of 78. Previous research has shown a link between a high-GI diet and type 2 diabetes.

They may also cause some skin-related side effects. [7 Foods You Can Overdose On]

"While there aren't any severe health problems associated with sweet potatoes, they are high in vitamin A, which the body stores," Flores said. "When levels get too high, you may notice your skin and nails looking a little orange."

This side effect should decrease if you cut down on sweet potato consumption.

According to the Mayo Clinic, people with a history of kidney stones may want to avoid eating too many sweet potatoes, as the vegetable contains oxalate, which contributes to the forming of calcium-oxalate kidney stones.

Sweet potatoes and yams are often used interchangeably in recipes, but in fact the two vegetables are not even related. Sweet potatoes are members of the morning glory family, while yams are closely related to lilies and grasses, according the Harvard T.H. Chan School of Public Health (HSPH). Yams are native to Africa and Asia, and there are more than 600 varieties. They are also starchier and drier than sweet potatoes.

Why the confusion? According to the Library of Congress website Everyday Mysteries, sweet potato varieties are classified as either "firm" or "soft." In the United States, the firm varieties came first. When soft varieties were first grown commercially, there was a need to differentiate the two kinds. African slaves began calling the soft sweet potatoes "yams" because they resembled the yams they knew in Africa. Today, the U.S. Department of Agriculture requires labels with the term "yam" to be accompanied by the term "sweet potato." Unless you are specifically searching for yams, which can be found in international markets, you are probably eating sweet potatoes.