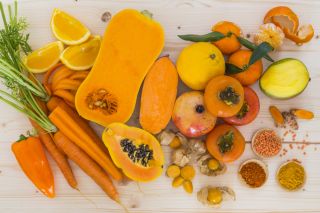 Carotenoids are plant pigments responsible for bright red, yellow and orange hues in many fruits and vegetables. These pigments play an important role in plant health. People who eat foods containing carotenoids get protective health benefits as well.

Carotenoids are a class of phytonutrients ("plant chemicals") and are found in the cells of a wide variety of plants, algae and bacteria. They help plants absorb light energy for use in photosynthesis. They also have an important antioxidant function of deactivating free radicals — single oxygen atoms that can damage cells by reacting with other molecules, according to the Linus Pauling Institute at Oregon State University.

Carotenoids also act as antioxidants in the human body. They have strong cancer-fighting properties, according to the Physicians Committee for Responsible Medicine. Some carotenoids are converted by the body to vitamin A, which is essential to vision and normal growth and development. Carotenoids also have anti-inflammatory and immune system benefits and are sometimes associated with cardiovascular disease prevention.

Carotenoid-containing foods are often red, yellow or orange, but not always. Louis Premkumar, a professor of pharmacology at Southern Illinois University School of Medicine and author of "Fascinating Facts about Phytonutrients in Spices and Healthy Food" (Xlibris, 2014), told Live Science that carrots, yams, sweet potatoes, papaya, watermelon, cantaloupe, mangos, spinach, kale, tomatoes, bell peppers and oranges are among the fruits and vegetables in which carotenoids can be found.

Animals cannot manufacture carotenoids themselves; they have to get it in their diets. Carotenoids need to be consumed with a fat in order for the body to absorb them. According to the Linus Pauling Institute at Oregon State University, carotenoids need to leave the food they came in and become part of mixed micelles, which are combinations of bile salts and lipids. The presence of a fat makes this process possible.

There are more than 600 types of carotenoids. The most common ones in the Western diet, and the most studied, are alpha-carotene, beta-carotene, beta-cryptoxanthin, lutein, zeaxanthin and lycopene, according to the Linus Pauling Institute.

Nutritionally, there is another, potentially more useful, grouping of carotenoids: provitamin A and non-provitamin A. Provitamin A carotenoids can be turned into vitamin A (retinol) in the intestine or liver. Vitamin A is an important component to human health. It helps maintain eye health, healthy mucus membranes and immunity. Alpha-carotene, beta-carotene and beta-cryptoxanthin are provitamin A carotenoids; lutein, zeaxanthin and lycopene are not.

Lutein and zeaxanthin are likely “effective in age-related macular degeneration (AMD), a leading cause of blindness,” said Premkumar. “A six-year study from the National Eye Institute concluded that lutein reduces the risk of AMD. It has been shown to reduce the incidence of cataract (lens opacity) and light sensitivity if consumed in adequate quantities on a daily basis.”

Premkumar noted that lutein could also be good for the heart. “Lutein is known to prevent the formation of atherosclerosis, which is composed of plaques that restrict blood flow to the heart muscle; when occluded, it fully leads to a heart attack,” he said. When lutein is in the blood, it can have an antioxidant effect on cholesterol, thereby preventing cholesterol from building up in the arteries and clogging them. A study published in Circulation found that participants who added lutein supplements to their diets had less arterial wall thickening than those who did not.

Lutein is also available through enriched eggs. A study published in the Journal of Nutrition found that lutein from enriched eggs was absorbed better than lutein from spinach or supplements.

Beta-cryptoxanthin is a xanthophyll carotenoid that is also provitamin A. It can be a source of vitamin A, but it produces half as much as beta-carotene. Premkumar listed papaya, mango and oranges as good sources of it. Beta-cryptoxanthin is typically found in yellow foods, such as corn and bell peppers, and is present in yellow-colored dairy products, such as egg yolks and butter.

Of the provitamin A carotenoids, beta-carotene is the most powerful when it comes to turning into vitamin A; twice as much beta-carotene becomes vitamin A than does alpha-carotene or beta-cryptoxanthin. Beta-carotene was the first and is the most widely studied of the carotenoids. It seems to be capable of both positive and negative effects, especially for smokers taking it as a supplement.

Two studies of showed that smokers and former asbestos workers who took beta- carotene supplements increased their risk of lung cancer, according to the Linus Pauling Institute. Doctors currently advise smokers not to take beta-carotene supplements. Large amounts of beta-carotene from food, however, do not seem to carry this risk; the worst they can do is temporarily turn your skin orange, according to the National Institutes of Health.

Beta-carotene may help protect against sunburn, according to a meta-analysis published in Photochemistry and Photobiology. The researchers looked at several studies and found that participants who took beta-carotene supplements for 10 weeks had lower rates of sunburn. For each month of additional supplementation, the protection level increased.

Early studies suggested that beta-carotene was associated with a reduced risk of lung cancer, according to a review published in the Journal of Nutrition. More recent studies have shown that relationship to be unreliable, although other carotenoids like alpha-carotene, lycopene and beta-cryptoxanthin have shown promise.

Together with lycopene, alpha-carotene was associated with reduced risk of lung cancer in a study of two large cohorts published in the American Journal of Clinical Nutrition.

Lycopene is a bright red pigment responsible for the color of watermelons, tomatoes, guavas and grapefruit. Other good sources include papaya, carrots, asparagus, red cabbage, red bell peppers and parsley. The lycopene in tomatoes is absorbed much more easily if the tomatoes are cooked, according to the Linus Pauling Institute.

“Lycopene can act as a potent antioxidant,” said Premkumar. In a test tube study published in Archives of Biochemistry and Biophysics, researchers found that, of all the carotenoids, lycopene was most effective at deactivating singlet oxygen (a harmful free radical). This may be because lycopene has a unique molecule shape that is highly effective in deactivating free radicals.

Lycopene is also associated with reduced prostate cancer risk. A large-scale study of nearly 50,000 men published in the Journal of the National Cancer Institute found an inverse relationship between lycopene levels and prostate cancer risk. Men with the highest levels of lycopene were 21 percent less likely to develop prostate cancer than those with the lowest lycopene levels. These men got their lycopene from tomatoes, which demonstrated the effectiveness of lycopene from food sources rather than supplements. However, the effects may have come from other nutrients in tomatoes.

Lycopene may promote bone health and help prevent the development of osteoporosis, said Premkumar. A study published in the Journal of Bone and Mineral Research found that participants with higher levels of lycopene in their blood were less likely to experience hip or nonvertebral fracture. Furthermore, a study published in Osteoporosis International found that postmenopausal women who added lycopene to their diets for four months saw decreased bone resorption (breakdown of bones), as well as increased antioxidant activity and decreased oxidative stress markers (abnormal free radical levels).

Together with alpha-carotene, lycopene was associated with reduced risk of lung cancer in a study of two large cohorts published in the American Journal of Clinical Nutrition.