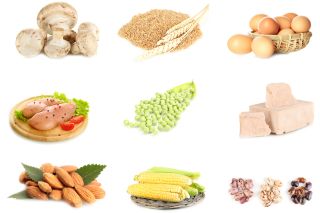 Vitamin B3, also called niacin, is one of the eight B-complex water-soluble vitamins. Niacin has a wide range of uses in the body, helping functions in the digestive system, skin and nervous system. Niacin, a name coined from nicotinic acid vitamin, comes in several forms, including niacinamide (nicotinamide) and inositol hexanicotinate. Each of these forms has various uses as well.

Food sources of niacin include yeast, meat, fish, milk, eggs, nuts, green vegetables, beans and enriched breads and cereals. The human body can also make niacin from the amino acid tryptophan, according to the National Institutes of Health (NIH).

Like other B vitamins, niacin helps the body break down carbohydrates, fats and proteins into energy, according to the University of Maryland Medical Center. In addition, it plays a role in gland and liver function. "Niacin has a role in producing certain hormones in the adrenal glands and helps remove harmful chemicals from the liver," Dr. Sherry Ross, women's health expert at Providence Saint John's Health Center in Santa Monica, California, told Live Science.

Niacin also can play a part in improving health. According to NIH, it is also used for treating migraine headaches, circulation problems and dizziness, and to reduce the diarrhea associated with cholera.

Some studies have found the taking niacin may help stroke patients. When rats with ischemic stroke were given niacin, their brains grew new blood vessels, according to researchers at Henry Ford Hospital in Detroit, Michigan. Ischemic stroke is caused by an obstruction within a blood vessel supplying blood to the brain and accounts for 87 percent of all cases. A 2000 study published in the journal Stroke also used rats and found that treatment with nicotinamide may repair damage to the brain caused by strokes.

Vitamin B3 may also be helpful to cancer patients. A recent study found that nicotinamide significantly reduces the incidence of nonmelanoma skin cancers in those with a history of basal cell carcinoma or squamous cell carcinoma.

It may be good for other skin conditions, too. In a double-blind trial by the State University of New York, the topical application of a 4 percent niacinamide gel twice a day for two months resulted in a similar acne improvement when compared to 1 percent clindamycin gel.

Those who have intimacy problems may also benefit from niacin. According to a study published in the Journal of Sexual Medicine, vitamin B3 was found to improve the ability to maintain an erection in men with moderate to severe erectile dysfunction.

A recent animal study suggested that niacin may be helpful in preventing inflammatory bowel disease and colitis. The 2017 study, published in Scientific Reports, found that rats that were given niacin and then induced with colitis saw less colonic damage than those who did not receive niacin. The authors attribute this protection to niacin's anti-inflammatory and anti-angiogenic effects. (Angiogenic means the formation and development of blood vessels.)

Niacin is known for lowering LDL (bad) cholesterol and triglycerides in the blood. Additionally, the Mayo Clinic reported that niacin could raise HDL (good) cholesterol by more than 30 percent. Therefore, niacin has been a major part of treating high cholesterol for at least 50 years. But a large-scale 2014 study has caused some health professionals to revisit that view.

The study, published in The New England Journal of Medicine, examined 50- to 80-year-olds with cardiovascular disease. They were already taking statin medication, which was combined with extended-release niacin and laropiprant, which reduces face flushing associated with niacin, for four years. Niacin did not result in the hypothesized reduced heart attacks and strokes. It also was associated with a higher risk of death from all causes and serious side effects, including liver problems, excess bleeding, infections, loss of blood sugar control in diabetics, gout and the development of diabetes. The authors of the study conclude that doctors should take these adverse effects into consideration when prescribing niacin and perhaps niacin should only be used to treat severe patients.

A 2017 article in the Journal of Clinical-Lipidology, however, cited previous studies that saw reductions in cardiovascular events in patients that combined niacin with statins. The authors of the article state that more research is needed before niacin ends its term as a cholesterol therapy mainstay.

One side effect of taking niacin supplements is mild flushing. Ross described it as a feeling of warmth, itching, redness or a tingly feeling under the skin. The flushing is harmless and usually subsides within one or two hours, according to the British Columbia Drug and Poison Information Center (DPIC). Some over-the-counter niacin tablets deliver the dose in a short burst, which makes the reaction more intense. Timed-release tablets deliver the vitamin more slowly, which reduces the intensity of the flushing. However, this type of niacin may cause liver damage in some people, according to the DPIC.

Other side effects can include stomach upset, intestinal gas, dizziness and pain in the mouth, the NIH reported.

In the United States and other developed countries, niacin deficiency is rare and is typically found in alcoholics. According to the University of Maryland Medical Center, symptoms of mild niacin deficiency include fatigue, canker sores, vomiting, depression, poor circulation and indigestion. More severe niacin deficiency can cause a condition called pellagra. The symptoms of pellagra include digestive problems, inflamed or flakey skin, diarrhea and mental impairment.

The normal recommended daily allowance (RDA) of niacin is dependent on age, gender, health conditions and reproductive status. For women and men, the average RDA is 14 to 16 milligrams a day, according to the NIH. Those taking medications or those that have medical conditions should contact a medical professional before taking niacin due to drug interactions and side effects.

Getting too much niacin is possible, even for healthy individuals. "When taking it, you need to check for interactions with other meds and make sure your labs tests are normal," said Dr. Kristine Arthur, internist at Orange Coast Memorial Medical Center in Fountain Valley, California. "If you take too much you can have side effects including nausea, stomach upset, abnormal liver tests, muscle breakdown and flushing — usually with over 1 to 2 grams per day."

Many doctors advise against self-medicating with niacin and suggest that in many cases supplementation isn't needed. "The water soluble vitamins, such as C and B complex, are much harder to reach toxic levels from over-ingestion, but does this mean we need to procure them from a supplement regularly? In most cases, the answer is no," said Dr. David Greuner, director and co-founder of NYC Surgical Associates. Most people are able to get plenty of niacin through a healthy diet.