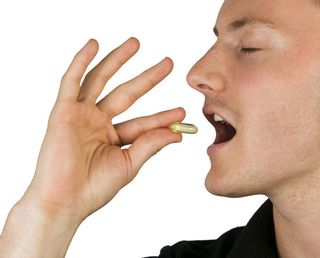 A daily dose of niacin, also known as vitamin B3, improves erectile function in men with high cholesterol, a new study finds.

In addition to ED, all 160 men also had high cholesterol and lipid levels.

"The exciting thing about this finding," said study author Dr. Chi-Fai Ng of The Chinese University of Hong Kong, "is that niacin is a very old drug and the safety of it is quite well-documented. Basically, it's just a vitamin, and so this would be a very simple way to improve erectile function."

The results were published online on Aug. 2 in The Journal of Sexual Medicine.

In patients with atherosclerosis, which is the accumulation of fats along blood vessel walls, niacin is known to improve both cholesterol and lipid levels. So it's no surprise that niacin also helps ED, because atherosclerosis and ED have similar causes, the researchers said.

"It's not that coronary disease causes erectile dysfunction," said Dr. Howard Herrmann, of the University of Pennsylvania Perelman School of Medicine. "It's that they both have same underlying pathophysiology."

Heart disease, stroke, atherosclerosis and erectile dysfunction can all be caused by inflammation of blood vessels, said Herrmann, who was not involved in the new study. When this inflammation occurs in blood vessels leading to the penis, ED results.

Herrmann worked on a 2006 study that looked at the effect of common cholesterol-lowering statins on ED. The study, while small, found that the statins helped ED drugs such as Viagra work better for some men.

Moreover, the statins had a faster effect on ED than they did on lowering cholesterol, suggesting that they were getting at the root inflammation of both problems, Hermann said.

The new niacin study echoes the statin study results, and strengthens the idea that ED is closely tied to other health issues, Hermann said. The men taking niacin not only scored better on a self-reported test of erectile function; their lipid levels also improved.

To work best, current ED drugs have to be taken within a few hours of sexual activity. For most patients, they improve erectile function, but only during that brief time span.

"Niacin is much more convenient," Ng said. "You take it once a day, whenever you want, and you can have sex any time."

The niacin used in his study was formulated in slow-release pills, designed to seep slowly into the bloodstream over the course of a day. The men started with a daily dose of 500 milligrams (mg), to make sure they had no adverse side effects, then increased to 1,000 mg and then 1,500 mg.

Herrmann said there are still questions about both niacin and statins before they'll be prescribed for the sole purpose of treating ED.

"There's still a lot to be learned about the type of patients who would be most likely to respond to these drugs," he said. "There are lots of scenarios that haven't been looked at."

The new study only included men who had high lipid levels as well as ED, but Ng said he would also like to study whether niacin has an effect in patients who have only ED.

Pass it on:  In men with high cholesterol and erectile dysfunction, a daily dose of niacin decreases their erectile symptoms.