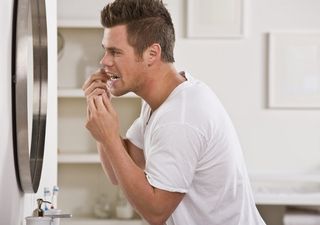 Bad breath and bleeding gums are not sexy.

But periodontitis, an inflammation or infection of the gums, may hamper your sex life in another way: it may be a cause of erectile dysfunction, a new study suggests.

The results showed that periodontitis impaired erectile function in rats.

Dentists and doctors should be made aware of the connection, said the researchers from Luzhou Medical College in China.

"Identifying and treating periodontitis in the patient presenting with or without [erectile dysfunction] may improve the patient’s sexual health," the researchers wrote.

However, others say the link is a bit of a stretch.

"I don’t think your gums are related to your penis in any reasonable way," said Dr. Andrew Kramer, a surgeon and erectile dysfunction expert at the University of Maryland Medical Center.

More research is needed to understand whether inflammatory diseases, which include periodontitis, are a cause of erectile dysfunction, he said.

They found periodontitis increased inflammation in the rats' bodies. Inflammation is an immune response and can be beneficial when your body is fighting off infection, but chronically high levels are known to be bad for overall health.

Rats with periodontitis also had less of an enzyme involved in achieving an erection, called eNOS. This enzyme produces nitric oxide, which relaxes blood vessels and increases blood flow to the penis.

The inflammation produced by periodontitis may decrease nitric oxide, which then interferes with erection, the researchers said.

The study is "one of the first indications that inflammation could have a negative impact on erectile function," said Dr. David Meldrum, an infertility expert and professor at the University of California, Los Angeles, who was not involved in the study.

Earlier studies have found the men with erectile dysfunction have higher levels of certain inflammatory markers, such as C-reactive protein, in their bodies, Meldrum said.

Another major cause of inflammation is abdominal fat, Meldrum said, which is also a known risk factor for erectile dysfunction.

Inflammation is also thought to play a role in heart disease, so it may be a common factor in periodontitis, heart disease and erectile dysfunction.

The study was published online June 23 in the Journal of Sexual Medicine.

Pass it on: Periodontitis impairs erectile function in animals, but it's not clear if the same thing happens in people.