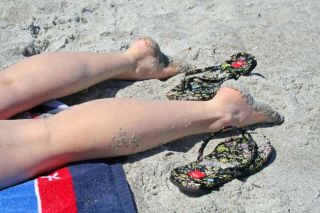 Ultraviolet light is a type of electromagnetic radiation that makes black-light posters glow, and is responsible for summer tans — and sunburns. However, too much exposure to UV radiation is damaging to living tissue.

Electromagnetic radiation comes from the sun and transmitted in waves or particles at different wavelengths and frequencies. This broad range of wavelengths is known as the electromagnetic (EM) spectrum. The spectrum is generally divided into seven regions in order of decreasing wavelength and increasing energy and frequency. The common designations are radio waves,microwaves, infrared (IR), visible light, ultraviolet (UV), X-rays and gamma-rays.

The guide goes on to state, "Radiations with wavelengths from 10 nm to 180 nm are sometimes referred to as vacuum or extreme UV." These wavelengths are blocked by air, and they only propagate in a vacuum.

UV radiation has enough energy to break chemical bonds. Due to their higher energies, UV photons can cause ionization, a process in which electrons break away from atoms. The resulting vacancy affects the chemical properties of the atoms and causes them to form or break chemical bonds that they otherwise would not. This can be useful for chemical processing, or it can be damaging to materials and living tissues. This damage can be beneficial, for instance, in disinfecting surfaces, but it can also be harmful, particularly to skin and eyes, which are most adversely affected by higher-energy UVB and UVC radiation.

Most of the natural UV light people encounter comes from the sun. However, only about 10 percent of sunlight is UV, and only about one-third of this penetrates the atmosphere to reach the ground, according to the National Toxicology Program (NTP). Of the solar UV energy that reaches the equator, 95 percent is UVA and 5 percent is UVB. No measurable UVC from solar radiation reaches the Earth's surface, because ozone, molecular oxygen and water vapor in the upper atmosphere completely absorb the shortest UV wavelengths. Still, "broad-spectrum ultraviolet radiation [UVA and UVB] is the strongest and most damaging to living things," according to the NTP's "13th Report on Carcinogens."

A suntan is a reaction to exposure to harmful UVB rays. Essentially, a suntan results from the body's natural defense mechanism kicking in. This consists of a pigment called melanin, which is produced by cells in the skin called melanocytes. Melanin absorbs UV light and dissipates it as heat. When the body senses sun damage, it sends melanin into surrounding cells and tries to protect them from sustaining more damage. The pigment causes the skin to darken.

"Melanin is a natural sunscreen," Gary Chuang, an assistant professor of dermatology at Tufts University School of Medicine, told Live Science in a 2013 interview. However, continued exposure to UV radiation can overwhelm the body's defenses. When this happens, a toxic reaction occurs, resulting in sunburn. UV rays can damage the DNA in the body's cells. The body senses this destruction and floods the area with blood to help with the healing process. Painful inflammation occurs as well. Usually within half a day of overindulging in the sun, the characteristic red-lobster look of a sunburn begins to make itself known, and felt.

Sometimes the cells with DNA mutated by the sun's rays turn into problem cells that don't die but keep proliferating as cancers. "The UV light causes random damages in the DNA and DNA repair process such that cells acquire the ability to avoid dying," said Chuang.

The result is skin cancer, the most common form of cancer in the United States. People who get sunburned repeatedly are at much higher risk. The risk for the deadliest form of skin cancer, called melanoma, doubles for someone who has received five or more sunburns, according to the Skin Cancer Foundation.

One of the most common ways of producing UV light is passing an electric current through vaporized mercury or some other gas. This type of lamp is commonly used in tanning booths and for disinfecting surfaces. The lamps are also used in black lights that cause fluorescent paints and dyes to glow. Light-emitting diodes (LEDs), lasers and arc lamps are also available as UV sources with various wavelengths for industrial, medical and research applications.

Many substances — including minerals, plants, fungi and microbes, as well as organic and inorganic chemicals — can absorb UV radiation. Absorption causes electrons in the material to jump to a higher energy level. These electrons can then return to a lower energy level in a series of smaller steps, emitting a portion of their absorbed energy as visible light. Materials used as pigments in paint or dye that exhibit such fluorescence appear brighter under sunlight because they absorb invisible UV light and re-emit it at visible wavelengths. For this reason they are commonly used for signs, safety vests and other applications in which high visibility is important.

Fluorescence can also be used to locate and identify certain minerals and organic materials. According to Thermo Fisher Scientific, Life Technologies, "Fluorescent probes enable researchers to detect particular components of complex biomolecular assemblies, such as live cells, with exquisite sensitivity and selectivity."

In fluorescent tubes used for lighting, "ultraviolet radiation with a wavelength of 254 nm is produced along with the blue light that is emitted when an electric current is passed through mercury vapor," according to the University of Nebraska. "This ultraviolet radiation is invisible but contains more energy than the visible light emitted. The energy from the ultraviolet light is absorbed by the fluorescent coating inside the fluorescent lamp and re-emitted as visible light." Similar tubes without the same fluorescent coating emit UV light that can be used to disinfect surfaces, since the ionizing effects of UV radiation can kill most bacteria.

Black-light tubes typically use mercury vapor to produce long-wave UVA light, which causes certain dyes and pigments to fluoresce. The glass tube is coated with a dark-purple filter material to block most of the visible light, making the fluorescent glow appear more pronounced. This filtering is not needed for applications such as disinfecting.

Besides the sun, there are numerous celestial sources of UV radiation. Very large young stars shine most of their light in ultraviolet wavelengths, according to NASA. Because Earth's atmosphere blocks much of this UV radiation, particularly at shorter wavelengths, observations are conducted using high-altitude balloons and orbiting telescopes equipped with specialized imaging sensors and filters for observing in the UV region of the EM spectrum.

According to Robert Patterson, a professor of astronomy at Missouri State University, most observations are conducted using charge-coupled devices (CCD), detectors designed to be sensitive to short-wavelength photons. These observations can determine the surface temperatures of the hottest stars and reveal the presence of intervening gas clouds between the Earth and quasars.

While exposure to UV light can lead to skin cancer, some skin conditions can be treated using UV light, according to Cancer Research UK. In a procedure called psoralen ultraviolet light treatment (PUVA), patients take a drug or apply a lotion to make their skin sensitive to light. Then a UV light is shone on the skin. PUVA is used to treat lymphoma, eczema, psoriasis and vitiligo.

It may seem counterintuitive to treat skin cancer with the same thing that caused it, but PUVA can be useful due to UV light’s effect on the production of skin cells. It slows down the growth that plays a major role in the disease’s development.

Key to the origin of life?

Recent research suggests that UV light may have played a key role in the origin of life on Earth, especially the origin of RNA. In a 2017 article in the Astrophysics Journal, the authors of the study note that red dwarf stars may not emit enough UV light to start the biological processes needed for the formation of ribonucleic acid, which is necessary for all forms of life on Earth. The study also suggests this finding could help in the search for life elsewhere in the universe.