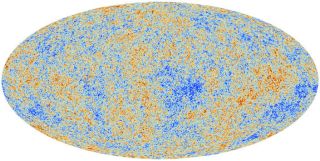 This image unveiled March 21, 2013, shows the cosmic microwave background (CMB) as observed by the European Space Agency's Planck space observatory. The CMB is a snapshot of the oldest light in our Universe, imprinted on the sky when the Universe was just 380 000 years old. It shows tiny temperature fluctuations that correspond to regions of slightly different densities, representing the seeds of all future structure: the stars and galaxies of today.
(Image: © ESA and the Planck Collaboration)

Microwaves are a type of electromagnetic radiation, as are radio waves, ultraviolet radiation, X-rays and gamma-rays. Microwaves have a range of applications, including communications, radar and, perhaps best known by most people, cooking.

Electromagnetic radiation is transmitted in waves or particles at different wavelengths and frequencies. This broad range of wavelengths is known as the electromagnetic spectrum EM spectrum). The spectrum is generally divided into seven regions in order of decreasing wavelength and increasing energy and frequency. The common designations are radio waves, microwaves, infrared (IR), visible light, ultraviolet (UV), X-rays and gamma-rays. Microwaves fall in the range of the EM spectrum between radio and infrared light.

Microwaves have frequencies ranging from about 1 billion cycles per second, or 1 gigahertz (GHz), up to about 300 gigahertz and wavelengths of about 30 centimeters (12 inches) to 1 millimeter (0.04 inches), according to the Encyclopedia Britannica. This region is further divided into a number of bands, with designations such as L, S, C, X and K, according to Ginger Butcher's book "Tour of the Electromagnetic Spectrum."

Microwaves are used mostly for point-to-point communications systems to convey all types of information, including voice, data and video in both analog and digital formats, according to the Federal Communications Commission (FCC). They are also used for supervisory control and data acquisition (SCADA) for remote machinery, switches, valves and signals.

Another important application of microwaves is radar. The word "radar" was originally an acronym for RAdio Detection And Ranging. Prior to World War II, British radio engineers found that short-wavelength radio waves could be bounced off distant objects like ships and aircraft, and the returning signal could be detected with highly sensitive directional antennas so the presence and locations of those objects could be determined. Usage of the term "radar" has become so common that it is now a word in and of itself, and can refer to systems that use microwaves or radio waves.

A little-known historical fact is that an early radar installation was built atop Kahuku Point on Oahu's northernmost tip. According to the state of Hawaii's website, the station actually detected the first wave of Japanese aircraft on their way to attack Pearl Harbor when the planes were 132 miles (212 kilometers) out. However, because the system had been in operation for only two weeks, it was considered unreliable, and the warning was ignored. Over the course of the war, radar was improved and refined, and it has since become an essential element of national defense and civilian air-traffic control.

Robert Mayanovic, a professor of physics at Missouri State University, said that Doppler radar, which often employs microwaves, is used for air-traffic control and vehicular speed-limit enforcement. When an object is approaching the antenna, the returning microwaves are compressed and thus have a shorter wavelength and higher frequency. Conversely, return waves from objects moving away are elongated and have a longer wavelength and lower frequency. By measuring this frequency shift, the speed of an object toward or away from the antenna can be determined.

Common applications of this principle include simple motion detectors, radar guns for speed-limit enforcement, radar altimeters and weather radar that can track the 3D motion of water droplets in the atmosphere. These applications are called active sensing, because microwaves are transmitted, and the reflected signals are received and analyzed. In passive sensing, natural sources of microwaves are observed and analyzed. Many of these observations are conducted by satellites looking either back at the Earth or out into space.

One of the most common uses of microwaves is to heat food quickly. Microwave ovens are possible because microwaves can be used to transmit thermal energy. The discovery of this phenomenon was purely accidental. In his book, "They All Laughed...: From the Light Bulbs to Lasers: The Fascinating Stories Behind the Great Inventions That Have Changed Our Lives" (HarperCollins, 1992), author Ira Flatow recounts the story of the invention of the microwave oven: "Shortly after World War II, Percy L. Spencer, an electronics genius and war hero, was touring one of his laboratories at the Raytheon Company. Spencer stopped in front of a magnetron, the power tube that drives a radar set. Suddenly he noticed that a candy bar in his pocket had begun to melt." Further investigation led him to make the first batch of microwave popcorn as well as the first exploding egg.

The first microwave ovens were quite large and expensive, but they have since become so affordable that they are common in homes worldwide. Microwave heating systems are also used in a number of industrial applications, including food, chemical and materials processing in both batch and continuous operations.

Radio astronomers conduct observations in the microwave region, but due to attenuation by the atmosphere, most of these studies are done using high-altitude balloons or satellites. However, perhaps the most famous observation of extraterrestrial microwaves was conducted by two Bell Labs scientists working on a telecommunications system using a large ground-based horn antenna.

According to the NASA Science website, "In 1965, using long, L-band microwaves, Arno Penzias and Robert Wilson, scientists at Bell Labs, made an incredible discovery quite by accident: They detected background noise using a special low-noise antenna. The strange thing about the noise was that it was coming from every direction and did not seem to vary in intensity much at all. If this static were from something on our planet, such as radio transmissions from a nearby airport control tower, it would come only from one direction, not everywhere. The Bell Lab scientists soon realized that they had serendipitously discovered the cosmic microwave background radiation. This radiation, which fills the entire universe, is a clue to its beginning, known as the Big Bang."

Penzias and Wilson were awarded the 1978 Nobel Prize in physics for their discovery. The cosmic microwave background radiation has since been mapped with great accuracy by satellites. These observations have revealed the minute temperature variations that eventually evolved into the galactic clusters we see today.

Analysis of this background radiation has also given astronomers clues as to the composition of the universe, and scientists now think about 95 percent of the cosmos is made up of matter and energy that cannot be "sensed" with conventional instruments, leading to the names dark matter and dark energy. Future analysis of this background radiation might shed further light on what happened shortly after the birth of the universe — and, potentially, even before this universe existed, according to some cosmic models.

Hackaday.com shows how to make the electronics for a Doppler motion sensor.