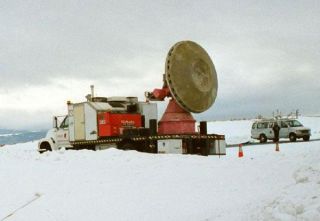 The Doppler Effect was first described in 1842 and was eventually used in weather forecasting.
(Image: © CSWR.)

You're sitting at a café, enjoying the recent balmy weather with an iced coffee. But ruining your sedate afternoon is the screeching siren of an approaching ambulance. As it nears, the sound seems to rise in pitch, until it wails by. Then, as it recedes into the distance, the siren seems to lower in pitch. Yet you know that the noise produced by the ambulance was constant the entire time. What is this phenomenon?

It isn't your imagination. The Doppler Effect was first described scientifically by Christian Doppler in 1842, and was verified a few years later with experiments conducted with a moving train. The effect describes the perceived different between the frequency at which a wave leaves its source and that at which it reaches the observer, a result of the relative motion of the observer or source.

Frequency (or pitch) measures how close each crest of a wave is to the next crest. If the source is moving towards the observer (or vice versa) the distance between crests with respect to the observer will become progressively smaller, since each crest has less distance to traverse before reaching the observer's ear. By contrast, as the source (or observer) moves away, each progressive crest must travel further to reach the ear. So it seems to an observer that the siren is rising and then falling in pitch.

The Doppler Effect underlies the fact that many phenomenal experiences depend upon one's point of reference. The siren rises and falls in frequency with reference to you, a seated observer. But to the ambulance driver, the siren remains constant. Furthermore, were you to produce a siren sitting at your table, to the driver it would seem to rise and fall in pitch similarly.

The Doppler Effect is not only observed in sound waves, of course. The light wave phenomena known as redshift and blueshift result from the same perceived difference in frequencies.