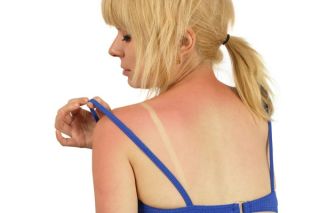 The redness of a sunburn comes from the body flooding the area with blood to treat the damage and from inflammation of the skin.
(Image: © Ron Sumners | Dreamstime)

Sunburns readily advertise that we've had fun in the sun, and perhaps have been a bit careless, but what exactly goes on in our cells to produce the painful, red inflammation has not been clear.

Now, researchers have discovered a molecular signal that triggers sunburns.

When our skin cells are exposed to ultraviolet B (UVB) radiation , a specific form of RNA, called micro-RNA, is damaged, the study found. (RNA is similar in structure to DNA, which makes up our genes.)

This damaged RNA is then released as a signal of solar injury, and prompts neighboring, healthy cells to stimulate the production of factors that promote inflammation, the researchers said.

The entire process is intended to remove sun-damaged cells, which could turn cancerous if not cleared away.

While other factors likely play a role in the inflammatory process we see as a sunburn, the findings suggest the damaged RNA molecules serve as a marker for radiation-caused injury, the researchers said. [Why Sunburns Hurt]

The findings may have implications for medical conditions, the researchers said.

For example, one treatment for the skin condition psoriasis is exposure to UV light. But while the light can relieve symptoms, it also increases skin cancer risk, Gallo said. The new findings suggest that certain RNA molecules could be used in place of UV therapy, and produce the same benefit, Gallo said.

In addition, people with certain autoimmune conditions get a burning sensation with very little exposure to UV light, before unhealthy cell damage has occurred, Gallo said. Blocking the micro-RNA pathway may be a way to reduce inflammation in these patients, Gallo said.

However, healthy people without such conditions would not want to block this pathway just to prevent sunburn, because it is an important way for the body to heal and get rid of damaged cells, Gallo said.

"The inflammatory response is a normal part of our protection against the sun," Gallo said.

The study is published online today (July 8) in the journal Nature Medicine.

Pass it on:  Damaged RNA molecules released from sun-damaged cells are one molecular trigger of sunburns.