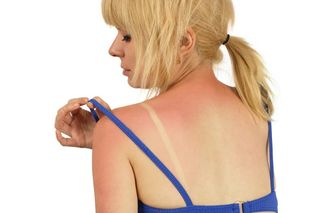 Ten people bared their forearms and willingly subjected their skin to sunburn, and the scientists who analyzed their burns now have a better understanding of how pain works.

The research revealed that a molecule called CXCL5 was significantly elevated in sunburned skin, and that this molecule controls sensitivity to the pain from sunburn, the researchers said. This could lead to new treatments.

"I'm excited about where these findings could take us in terms of eventually developing a new type of analgesic for people who suffer from chronic pain," said study researcher Stephen McMahon, professor of age-related diseases at King's College London.

The molecule stimulates pain receptors, but also attracts immune system cells to the site of an injury, which promotes the healing process, the study said. This is the first study to demonstrate this molecule's role in mediating sunburn pain. [Infographic: What to Look for on New Sunscreen Labels]

Pain research in the past has met with difficulty because studies done with animals, such as rats, haven't helped humans, the researchers said. That's because the slew of molecules involved in the immune response to an injury are different between species.

In the new study, the researchers first analyzed samples of sunburned human skin and found that CXCL5 levels were elevated, then injected the molecule into rat skins and found it caused the animals to become more sensitive to touch and heat in the area near the injections.

"We hope that we have identified a potential target, which can be utilized to understand more about pain in other inflammatory conditions like arthritis and cystitis," McMahon said.

The study is published online today (July 6) in the journal Science Translational Medicine.

Pass it on:  Blame the pain of your sunburn on your elevated CXCL5 levels.