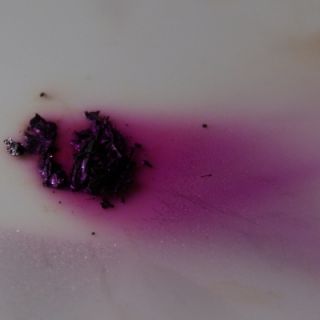 Iodine can sublimate into a violet-pink gas.
(Image: © Images of elements)

Iodine is an essential element needed for life. It is best known for the vital role it plays in thyroid hormone production in humans as well as in all vertebrates. Iodine deficiency can lead to serious health problems, including goiter (enlarged thyroid gland), intellectual disability and cretinism.

As a pure element, iodine is a lustrous purple-black nonmetal that is solid under standard conditions. It sublimes (changes from a solid to a gaseous state while bypassing a liquid form) easily and gives off a purple vapor. Although it is technically a non-metal, it exhibits some metallic qualities.

Iodine is classified as a halogen — a subset of very chemically reactive elements (Group 17 on the periodic table) that exist in the environment as compounds rather than as pure elements. The other halogens include fluorine (F), chlorine (Cl), bromine (Br) and astatine (At). The term halogen means "salt-producing." When these elements react with metals, they produce a wide variety of salts, such as calcium fluoride, sodium chloride (common table salt), silver bromide and potassium iodide.

Iodine is the least reactive of the halogens as well as the most electropositive, meaning it tends to lose electrons and form positive ions during chemical reactions. It is also the heaviest and the least abundant of the stable halogens. There are 30 known isotopes of iodine, but only one is naturally occurring (I-127).

Iodine has several commercial applications and can be found in a variety of pharmaceuticals, disinfectants, inks and dyes, catalysts, photography chemicals and animal feed supplements. It plays a particularly prominent role in medicine. For example, iodine compounds are commonly used as sterilizing and wound-cleansing solutions and as internal contrasting agents in imaging techniques such as computed tomography (CT) scans, radiography and fluoroscopy. The radioactive isotope iodine-131 is also used to treat cancer in the thyroid gland.

About 99.6 percent of the Earth's mass is a mixture of 32 chemical elements, according to the World Iodine Association (WIA). The remaining 0.4 percent is divided among 64 elements — all of these in trace amounts. Iodine is the 61st element in terms of abundance, making it not only one of the least abundant nonmetallic elements on Earth but also one of the rarest elements needed for life.

Although iodine is not particularly abundant, it can be found in trace amounts nearly everywhere: water, soil, rocks, plants, animals and humans. Seawater is the largest reserve of iodine, holding about 34.5 million tons. But the concentrations are so low — averaging between 50 to 60 parts per billion (ppb) — that direct extraction is not feasible. Rivers contain less iodine, at approximately 5 ppb, according to Lenntech Water Treatment Solutions of Denmark.

Most of the world's industrial iodine is obtained from brines (water strongly saturated in salt) associated with gas wells in Japan and from caliche ore mined in the Atacama Desert of northern Chile. In the United States, iodine is derived from deep well brines in northern Oklahoma.

Bernard Courtois, a French chemist, accidentally discovered iodine in 1811 during the Napoleonic Wars. Courtois was helping his father manufacture saltpeter — an important component in gunpowder that was in heavy demand at the time. Initially, he had been using wood ash as the source of potassium nitrate needed to make the saltpeter. However, due to a wood ash shortage, he began using seaweed instead. In order to isolate the sodium and potassium extracts from the seaweed, Courtois would burn the seaweed and wash the ash with water. Then, sulfuric acid was added to eliminate the leftover waste. After adding a little too much sulfuric acid one time, Courtois noticed a cloud of violet gas. He then discovered that the vapor would condense into deep violet crystals on cold surfaces.

At the time, Courtois did not realize he had discovered iodine, but he suspected it might be a new element. He gave some samples to other scientists to continue the research who eventually confirmed that it was indeed a new element. It was given the name iode (from the Greek ioeidēs, meaning "violet colored") by French chemist Joseph Louis Gay-Lussac.

Although Courtois wasn't the one to name it, he was still later acknowledged as the first person to isolate iodine. In 1831 he received the Montyon Prize from the Royal Academy of Sciences for his work, but unfortunately, he never gained any financial benefit from his discovery.

Iodine is required for the synthesis of thyroid hormones thyroxine (T4) and triiodothyronine (T3). T4 and T3 contain four and three atoms of iodine per molecule, respectively. These hormones are vital to human health as they control the production and utilization of energy throughout the entire body. A deficiency in iodine leads to reduced production of these hormones and may result in goiter and/or mild to severe intellectual disability. In very severe cases of iodine deficiency in pregnant women, babies can be born with congenital hypothyroidism (or cretinism, now considered a derogatory term), a condition of severely stunted physical and mental development.

Overall, iodine deficiency affects about 2 billion people worldwide and is the leading preventable cause of mental disability in developing areas of the world, according to Synapse, an Australian brain injury organization. India has the highest prevalence of iodine health conditions, with 500 million people suffering from deficiency, 54 million from goiter and 2 million from full-blown hypothyroidism, according to Synapse.

The U.S. recommended daily intake of iodine is 150 micrograms (mcg) per day for adults and approximately double that amount for pregnant and nursing women. Sea vegetables and animals — particularly seaweeds (wakame and kelp), scallops, shrimp and cod — have the highest concentrations of iodine, but iodine also comes from land-based food sources, such as plants that grow in iodine-rich soil or from dairy products and eggs as long as the cows and chickens had enough iodine in their diets.

Since iodine is needed in only trace amounts, getting too much of it can cause health problems as well. People who consume a lot of foods rich in iodine, particularly kelp and wakame, on a daily basis should make sure that their total daily intake does not exceed the Tolerable Upper Limit (UL) established by the National Academy of Sciences of 1,100 micrograms (for adults 19 and older) per day, according to the World’s Healthiest Foods (WHF).

American pathologist David Marine is credited with getting the ball rolling toward putting iodine in salt. On his first day as a new doctor in Cleveland in 1905, Marine was immediately struck with how many people, and even dogs, were walking around with swollen necks, indicative of a widespread goiter problem. In fact, the condition had become so pervasive that a large stretch of land from the Rockies to the Great Lakes region to western New York was known as the "goiter belt."

After exploring a few hypotheses and coming up empty-handed, Marine began experimenting with iodine supplements. He conducted one of the first ever large-scale human experiments by giving miniscule doses of iodine to 2,000 healthy (goiter-free) students in Akron, Ohio. A control group of 2,000 healthy students were not given any iodine but were still closely monitored.

The results were astounding. Of the 2,000 who received iodine, only five eventually developed a thyroid condition, compared to 475 individuals in the control group.

Although there had been some existing research at the time linking iodine to the thyroid gland, Marine conclusively established that iodine was indeed an essential element for life and one in whose absence could result in severe health problems. Marine's important findings led to the first iodized salt being sold in the United States in 1924. Soon after its introduction, iodized salt had largely eliminated the widespread goiter deficiency.