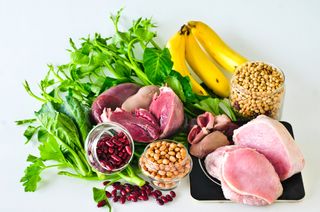 Vitamin B6, along with the other B vitamins, helps the body turn food into energy. On its own, vitamin B6 has many other uses that are important to maintaining a healthy body and developing a healthy brain. Vitamin B6 is so important it may have triggered the growth of the first living creatures on Earth.

“The fact that B vitamins are so important to our nutritional status coupled with the fact that they are "water soluble" — they are not stored in your body to any major extent — makes it quite easy to run dry on supplies,” said Dr. David Greuner, director and co-founder of NYC Surgical Associates.

Since the body can so easily run out of B6, it is important to consume foods that contain B6. Some of the best sources of B6 include beans, poultry, fish, fortified cereals, dark leafy greens, papayas, oranges and cantaloupe, according to the Harvard School of Public Health (HSPH). Bananas are another good source.

Vitamin B6 may have given rise to Earth's first oxygen-producing organisms, according to researchers at the University of Illinois. Around 2.4 billion years ago, the planet experienced a huge spike in atmospheric oxygen levels. Scientists have long held that this rise in oxygen, called the Great Oxygenation Event, was tied to the arrival of the first photosynthetic organisms. (Oxygen is a byproduct of photosynthesis, which uses sunlight to turn carbon dioxide into sugary foods.) But nobody knew why these oxygen-producing organisms emerged in the first place.

Researchers found that the oldest oxygen-based process involved the production of pyridoxal, a form of vitamin B6, about 2.9 billion years ago, the same time that the enzyme manganese catalase appeared.

Besides producing energy for the body, the B vitamins also have several other uses. “B complex vitamins are often looked at as the metabolic enhancers of their group," Greuner said. "They are responsible for the way your body unlocks the energy in food to be able to utilize the nutrients effectively, assist in hormonal optimization, cell health and energy utilization.” Furthermore, he said, without B6, the body wouldn’t be able to absorb vitamin B12.

Along with several other B vitamins, pyridoxine, a form of vitamin B6, controls levels of the amino acid homocysteine in the blood, which may be key to lowering susceptibility to heart disease and stroke, according to HSPH, though studies have been inconclusive thus far.

B6, specifically, is a vitamin that is used to make several neurotransmitters in the brain, according to the University of Maryland Medical Center. Neurotransmitters are chemicals that carry signals from one nerve cell to another. These chemicals are important for processing thought and healthy brain development. They are also responsible for telling the body to make hormones that influence mood and the body’s sleep cycles.

Vitamin B6 is also important for women’s and baby health, in particular. “During pregnancy and infancy, vitamin B6 is used in brain development and to support immune function,” said Dr. Sherry Ross, women’s health expert at Providence Saint John’s Health Center in Santa Monica, California. The U.S. National Library of Medicine (NLM) also reports that administering pyridoxine intravenously is an effective treatment for controlling seizures in infants caused by pyridoxine dependence. Women also use vitamin B6 for premenstrual syndrome (PMS), depression related to pregnancy and the birth control pill, and symptoms related to menopause. A study by the State University of New York found that 30 mg of B6 may help reduce morning sickness.

Though a major deficiency in vitamin B6 is rare, many people may have a slight deficiency, according to the University of Maryland Medical Center. People most likely to have a deficiency are children, the elderly, and those who take certain medications that can cause low levels of B6.

People who have trouble absorbing vitamin B6 from food or dietary supplements can develop a deficiency, as well. They include those with kidney disease, alcoholism, hyperthyroidism, autoimmune disorders such as rheumatoid arthritis, and inflammatory bowel disease such as celiac disease, or Crohn’s disease, said Ross.

Symptoms of vitamin B6 deficiency include weak immune system, anemia, itchy rashes, scaly skin on the lips, cracks at the corners of the mouth and a swollen tongue. Other symptoms of a very low vitamin B6 levels include depression and confusion, according to NLM.

Vitamin B6 causes interactions with some medications, so be sure to contact a medical professional before taking a pyridoxine supplement. For the most part, though, B6 is considered safe to consume naturally through foods and through moderate supplementation because it is a water-soluble vitamin. “In general, most vitamins fall into either one of two broad categories — water or fat soluble," Greuner said. "Why is this important? Water soluble vitamins are for the most part eliminated daily, where fat soluble vitamins are stored within the body's tissues.”

Though typically safe, too much B6 isn’t a good thing. “Symptoms such as dizziness, nausea, sensitivity to sunlight and nerve damage can occur when people regularly take over 250 mg daily, but can occur at even 100 mg every day,” said Dr. Kristine Arthur, internist at Orange Coast Memorial Medical Center in Fountain Valley, California.

Persistent consumption of excessively high doses of B6 can cause severe sensory nerve damage, leading to numbness, sensory changes and loss of control of bodily movements.  The NLM rates B6 as possibly unsafe for long-term use in high doses.