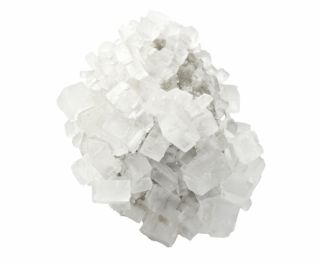 Alone, it's explosive. Combined with chlorine, it's table salt.

That's sodium for you — a wild and wooly element that reacts easily and mixes with other elements to make some of the most common substances in daily life. Other than table salt (NaCl), sodium shows up in baking soda (NaHCO3), sodium peroxide (Na2O2) and borax, or sodium borate (Na2B4O7•10H2O). It's crucial for blood-pressure control and the functioning of the nervous system.

But let's start with the explosions.

When mixed with water, sodium reacts spectacularly. The combination produces sodium hydroxide, hydrogen gas and heat (the technical term for these heat-creating reactions is an exothermic). The heat is so intense that it ignites the hydrogen gas, creating an impressive explosion. Scientists have even caught this reaction on high-speed video, capturing the blast and explaining why the reaction happens so quickly. It turns out that when the water and sodium first combine, the sodium releases electrons — negatively charged particles — leaving the element in a positively charged state, the researchers reported in the journal Nature Chemistry in January 2015. All those positive charges repel each other, tearing the sodium apart and creating more surface area for an even bigger reaction: ka-boom.

According to the Jefferson National Linear Accelerator Laboratory, the properties of sodium are:

Sodium is an alkali metal, found on the leftmost side of the Periodic Table with its compatriots: lithium, potassium, rubidium, cesium and francium. What all of these alkali metals have in common is a single electron in their outermost shell. Atoms share electrons with other atoms in order to bond, and a single electron dangling out on the edge is simply too tempting to pass up, molecularly speaking. As a result, sodium and the other alkali metals are so reactive that they're never found alone in nature. They're always bonded with at least one other element to form compounds.

Sodium-containing compounds have been known and used since ancient times. Ancient Egyptians, for example, used a substance called natron to pack mummies and their organs, drying out the flesh and preserving it. Natron is a mixture of sodium-containing soda ash (sodium carbonate) and baking soda (sodium bicarbonate) that occurs naturally.

Credit for discovering pure sodium, however, goes to English chemist Humphry Davy, who used electrolysis to isolate the element from sodium hydroxide, according to the Royal Society of Chemistry.

Pure sodium metal does that fun flash-bang trick in water, but its practical uses are limited. Some nuclear reactors use liquid sodium as a coolant. According to Hitachi, which makes some of these reactors, using a metal as a coolant is an added safety feature, since the sodium easily conducts and dissipates any excess heat.

Mostly, though, sodium is used as part of one of the compounds it so readily creates. Borax is used in detergents and cosmetics; sodium bicarbonate, or baking soda, is used to leaven bread and other baked goods; sodium nitrite is used to preserve food, particularly deli meats.

In the body, sodium helps regulate water levels, making it crucial for maintaining blood pressure. Humans don't need much, though. According to the American Heart Association (AHA), adults should consume about 1,500 milligrams a day. Most Americans get 3,400 milligrams a day. (Recent research has raised questions about the appropriate amount of salt in the diet, with an August 2014 study finding that moderate consumption may reduce the risk of cardiovascular problems.)

Sodium carbonate, known colloquially as soda ash or washing soda, is a common water softener that's easily produced from limestone or table salt. Now, researchers have taken this white powder and encapsulated it into tiny balls that look something like caviar. The capsules absorb carbon dioxide, meaning they could be used to "scrub" the greenhouse gas from fossil fuel power plant emissions.

"The CO2 just passes in and gets absorbed by the core" of the capsule, said study researcher John Vericella, an engineer at Lawrence Livermore National Laboratory.

Humanity produces an incredible 10 gigatons of carbon dioxide each year, a weight that exceeds the entire mass of the human race plus all of the cereal grains grown on the planet annually, Vericella told Live Science. CO2 traps heat in the atmosphere, causing the globe to warm.

One way to ameliorate the problem is to capture carbon as it escapes from burning fossil fuels — before it hits the atmosphere. Currently, many power plants use nitrogen-containing compounds called amines, sprayed onto huge steel-mesh scrubbing towers, which snag CO2 from the plants' waste gas. These amines have drawbacks, however, Vericella said. Some escape into the atmosphere and become a source of pollution; amines also eat away at the steel mesh towers that support the carbon-capture process.

That's where sodium carbonate capsules come in. The tiny spheres are made of a permeable polymer shell, which allows CO2 to pass through. Inside is a core of sodium carbonate solution, which has thermodynamic properties that make it a good absorber of carbon dioxide, Vericella said.

Sodium carbonate has long been known to be a good CO2 absorber, Vericella said, but it's slower than amine solutions. With encapsulation, however, the surface area for absorption increases, to 100 times that of a normal steel-mesh tower with amine solution. As a result, the reaction speeds up.

Once the capsules absorb their maximum carbon dioxide, they are heated and the CO2 removed for sequestration. The capsules can then be reused.

"In all of these systems, you have to reuse the material because the scale of the problem is so big," Vericella said.

The researchers reported their findings Feb. 5, 2015, in the journal Nature Communications. The next step, Vericella said, is to scale up. So far, they've tested the microcapsules in test-tube quantities. It will take many more to tackle the global problem of CO2 emissions.