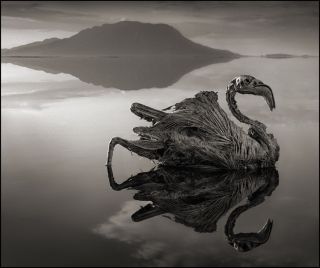 The body of a flamingo on Lake Natron, as captured by photographer Rick Brandt.
(Image: © © Nick Brandt 2013 Courtesy of Hasted Kraeutler Gallery, NY)

Lake Natron in Tanzania is one of the most serene lakes in Africa, but it's also the source of some of the most phantasmagorical photographs ever captured — images that look as though living animals had instantly turned to stone.

The alkaline water in Lake Natron has a pH as high as 10.5 and is so caustic it can burn the skin and eyes of animals that aren't adapted to it. The water's alkalinity comes from the sodium carbonate and other minerals that flow into the lake from the surrounding hills. And deposits of sodium carbonate — which was once used in Egyptian mummification — also acts as a fantastic type of preservative for those animals unlucky enough to die in the waters of Lake Natron.

Despite some media reports, the animal didn't simply turn to stone and die after coming into contact with the lake's water. In fact, Lake Natron's alkaline waters support a thriving ecosystem of salt marshes, freshwater wetlands, flamingos and other wetland birds, tilapia and the algae on which large flocks of flamingos feed. Now, photographer Nick Brandt has captured haunting images of the lake and its dead in a book titled "Across the Ravaged Land" (Abrams Books, 2013). [Photos: Lake Natron Gives Up Its Dead]

Brandt discovered the remains of flamingos and other animals with chalky sodium carbonate deposits outlining their bodies in sharp relief. "I unexpectedly found the creatures — all manner of birds and bats — washed up along the shoreline of Lake Natron," Brandt wrote in his book. "No one knows for certain exactly how they die, but … the water has an extremely high soda and salt content, so high that it would strip the ink off my Kodak film boxes within a few seconds."

"I took these creatures as I found them on the shoreline, and then placed them in 'living' positions, bringing them back to 'life,' as it were," Brandt wrote, referring to the way he repositioned the animals. "Reanimated, alive again in death."

During breeding season, more than 2 million lesser flamingos (Phoenicopterus minor) use the shallow lake as their primary breeding ground in Africa. The flamingos' nests are built on small islands that form in the lake during the dry season.

Lake Natron is one of two alkaline lakes in that area of East Africa; the other is Lake Bahi. Both are terminal lakes that do not drain out to any river or sea; they are fed by hot springs and small rivers. As shallow lakes in a hot climate, their water temperatures can reach as high as 106 degrees Fahrenheit (41 degrees Celsius).

The serenity of Lake Natron — and its flamingo population — are threatened by a proposed hydroelectric power plant on the Ewaso Ngiro River, the main river feeding the lake. As isolated as the lake is (it wasn't even discovered by Europeans until 1954), there are no protections in place for the lake or its threatened flamingo population.