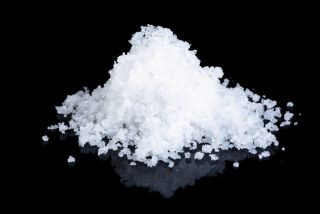 Named for its use in the process of koshering (or removing blood from meat) in accordance with Jewish dietary laws, kosher salt has a large grain size and lower sodium content than most common table salts. The coarse grain of this salt is ideally suited to the koshering process because it covers a large surface area without being fully absorbed into the meat.

Despite its name, kosher salt is not inherently a kosher product (though many brands of kosher salt are also certified kosher). It's popular with kosher-keeping and non-kosher-keeping cooks alike for a variety of reasons. Unlike common table salt, kosher salt does not contain iodine, which many cooks believe lends a bitter, metallic flavor to salty dishes. Kosher salt is also typically free of other additives, such as anti-caking or anti-lumping agents, making it a purer source of sodium.

Many cooks prefer to use kosher salt because of its texture as well. The coarse flakes of this salt are less likely to stick to a chef's fingers than are the tiny grains of table salt, making it easier to add just a pinch of kosher salt to a dish. And kosher salt's large, flakey grains contain about half the sodium content of table salt, which lends the foods it is used in a light crunch and a more subtle salty flavor.