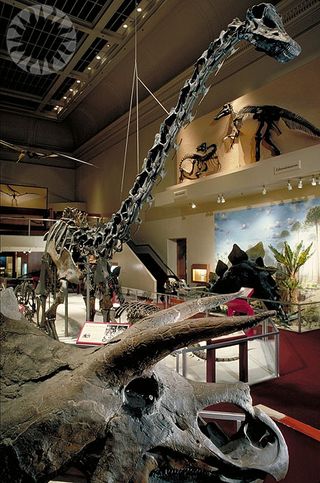 The Gorgosaurus and Edmontosaurus skeletons appear on the wall in this photo, framed by the head and very long neck of a Diplodocus skeleton. A Triceratops skull is in the foreground.
(Image: © Chip Clark, NMNH)

Abby Telfer is FossiLab manager at the Smithsonian National Museum of Natural History (NMNH). This article was adapted from her post on the blog Digging the Fossil Record: Paleobiology at the Smithsonian, where this article first ran before appearing in LiveScience’s Expert Voices: Op-Ed & Insights.

After an earthquake shook the Washington, D.C., area in August 2011, curators at the Smithsonian National Museum of Natural History were concerned about the massive, yet fragile, fossils displayed in the museum’s Dinosaur Hall.

Most of the skeletons were easy to examine for damage, but preparators needed to use scaffolding to reach two dinosaurs mounted high up on one of the hall’s main walls. A Gorgosaurus — a Tyrannosaurus rex relative that scientists thought until recently was the same type of dinosaur as Albertosaurus — and an Edmontosaurus, a “duck-billed” hadrosaur, are historically important, as paleontologists collected them during the late 19th and early 20th centuries.

The skeletons had cracks in their limb bones, and several Edmontosaurus toe bones were badly damaged.

Once necessary repairs were made, fossil preparators gave both skeletons   a good cleaning. Then, preparator Pete Kroehler made a mold of the Gorgosaurus skull so that a replica, called a cast, could be made. Pete coated the parts of the skull protruding from the wall with thick silicone rubber to make the inner layer of a mold and covered the rubber with plaster to create a hard outer shell to support it.

This was an unusual way of making a mold, but the scaffolding wasn’t up long enough for Pete to remove the skull  from the wall, mold the entire skull and re-mount it. A cast made from the new mold is now available for scientists who wish to study the Gorgosaurus skull — no ladders or scaffolding required.

The scaffold perch also offered some unusual views of other Dinosaur Hall specimens, including the Stegosaurus skeleton that stands in the central exhibit area, and the model of the Quetzalcoatlus pterosaur that is suspended from the ceiling.

The views expressed are those of the author and do not necessarily reflect the views of the publisher. This article was originally published as Bird’s Eye Views in the Dinosaur Exhibit on the blog Digging the Fossil Record: Paleobiology at the Smithsonian.